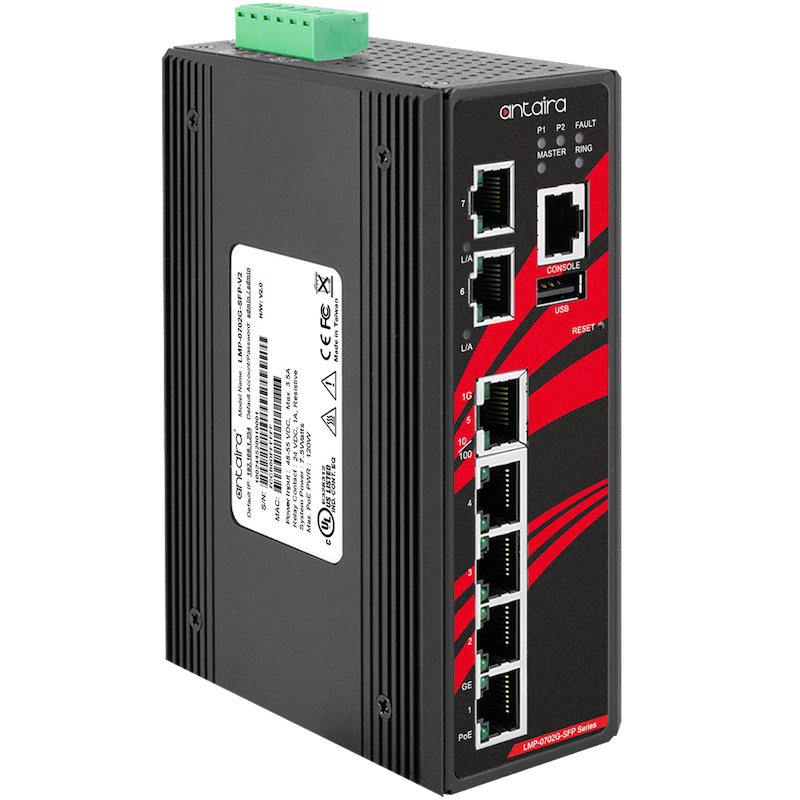 The new hardware update will be known as “V2”.

The affected switches are listed below:

With the new operating system comes new features that bring these smaller switches up to the same feature set as the larger port count Antaira Ethernet switches.

ERPS is an open standard used for creating redundant link rings. Ring technology helps prevent system outages by creating multiple paths allowing data to make it to its destination even when a link has failed.

Using an open standard for the ring allows a customer to not be locked into a proprietary protocol.

Antaira’s LMP-0702G-SFP-V2 Series industrial PoE switch can provide PoE ports (30 watts) for security applications, and also fibre optic interfaces for long-range connectivity (1 meter to 100 KM), that is, from three feet to over 60 miles.

The SFP port will not only allow connectivity beyond the 100 metre/300-foot limitation of copper cable but also permits connectivity through areas where electromagnetic interference may cause issues found on factory floors.

LMP-0702G-SFP-24-V2 series has the same features and specs as the LMP-0702G-SFP-V2 except for the switch power input supports 12~48VDC which is ideal for applications where only 24 volts of DC power is readily available such as automation applications.