Canadian manufacturers are starting to invest in AI, but not necessarily in the areas that are getting all the press 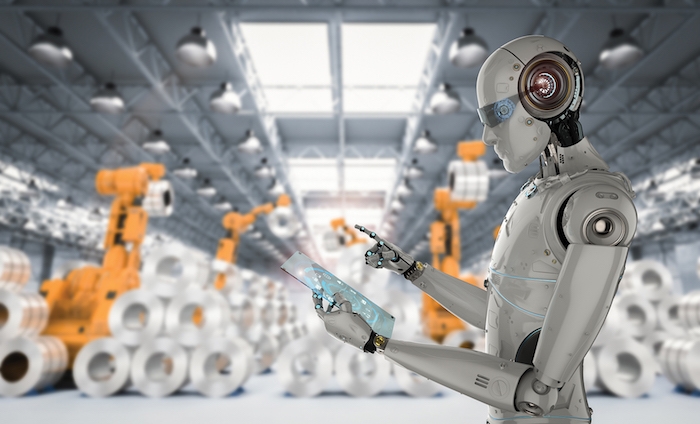 March 18, 2019 – One of the hottest topics at this year’s World Economic Forum in Davos was the wave of automation expected from advances in artificial intelligence (AI), and the consequent displacement of workers. This anticipated realignment was depicted as good or bad news depending on who was speaking and who was listening.

“They [executives] see AI as a golden ticket to savings, perhaps by letting them whittle departments with thousands of workers down to just a few dozen,” wrote New York Times business columnist Kevin Roose, citing off-the-record interviews at the event.

Such dramatic scenarios make great headlines, but according to Michael Martin, the national IoT executive for IBM Canada, the emerging scenario, at least in manufacturing, is not about legions of intelligent robots taking over entire plants.

“At IBM, we view AI truly as an augmentation to the human worker,” says Martin. “We don’t see it as a total replacement of workers. That’s a big myth.”

Furthermore, the areas likely to have the most impact are not widely discussed, according to Dr. Alexander Wong, University of Waterloo engineering professor, Canada Research Chair in the area of artificial intelligence, and a founding member of the Waterloo Artificial Intelligence Institute.

“There are a lot of things that people talk about, because they have a high profile, or are flashier,” says Wong. “Predictive maintenance, where data from installed sensors is used to build an AI model that predicts when maintenance is required, is one example. Another is applying AI in visual quality inspection to identify if a product or a part has a defect.”

Wong says that robotics often get a lot of attention “because robots are cool. But there are quite a lot of different applications that people are now just starting to think about that could actually have an even bigger impact on manufacturing.”

AI deployment in Canadian manufacturing is in early stages – Martin estimates that North America is two years behind Europe. Although most projects aren’t yet being revealed to the public, many are underway.

“We’re working with a number of different manufacturers on proof-of-concept or pilot programs with the intention of going into production,” says Michael Gardiner, manufacturing industry solution executive for Microsoft Canada in Mississauga.

Wong, Martin and Gardiner are not yet able to name companies, but Toyota Canada, whose parent company has pledged a billion-dollar-plus investment in AI with a mandate that includes improving manufacturing processes, is clearly one to watch.

“There’s a lot going on in the background,” says Wong, who notes that much of the activity has been in automotive and aerospace. “There are a lot of use cases where I’m talking to different manufacturers and helping them plan. But it’s not at the stage where we’re seeing massive deployment just yet. Once that happens, it will be quite game changing.”

New capabilities
One of the most familiar forms of AI in industrial environments is machine learning. Unlike previous approaches that apply fixed rules and algorithms developed by programmers, a machine learning AI essentially builds it own models from collected data by trial and error. Because of the enormous “brute force” of modern computing, the approach allows AI models to consider millions and millions of possible scenarios, and to continually adjust to changing circumstances. It also means usable information can be extracted from a much wider range of sensed data than was previously possible, creating new possibilities.

“A lot of people focus on visual inspection,” says Wong, “but there are other kinds of sensors that you can also leverage to identify things. Acoustic inspection is another thing the people are starting to look into. And at the end of the day, this could actually be just as important if not more important than visual inspection.” Acoustics could reveal, for example, an incorrectly installed part, or a motor about to fail.

In many cases, AI depends on large amounts of data, so the technologies that feed it – often discussed in the context of Industry 4.0 – are essential to the AI picture. Martin cites a few examples – blockchain, edge computing, the MQTT network protocol and Internet of Things (IoT).

“I see it as an ecosystem,” says Martin. “AI gets all the press, but there are also a number of unsung heroes. Without IoT on the front end, you couldn’t get to AI on the back end.”

Conversely, because of its unique ability to leverage the mountains of IoT-generated data that companies are already collecting, AI provides a huge opportunity for advancement.

“You need to look at your data as an asset,” says Dr. Cindy Gordon, AI spokesperson for the Canadian Advanced Technology Alliance (CATA) and founder of SalesChoice, an AI SaaS predictive and prescriptive guiding selling company. “Some people call it the new oil, but I honestly think it’s the new oxygen.”

Improved safety
Worker safety is another emerging AI use case not often discussed, and also, one of the most illustrative examples of the power of AI. “AI can identify if workers are wearing hard hats or safety equipment, or are in an area that is not quite safe,” says Wong. “Is there heavy equipment coming in where there may be a collision course? These greatly improve productivity as well as safety of the plant.”

A weakness of traditional rules-based AI methods is that when designing algorithms for manufacturing, especially for worker safety applications, it’s easy to leave out a factor – perhaps one that wasn’t anticipated – allowing a window where injuries can occur.

“You’d have to write millions and millions of rules based on all these different factors,” says Wong, “and in a dynamic environment – in real life – your rules are never perfect.”

With machine learning, on the other hand, the rules are determined by all of the information that is collected. “ So why not let data drive it?” says Wong.

New ways of collecting safety data are evolving as well. “One of the trends we’re seeing is the use of wearable technology that allow us to geo-locate workers in the plant,” says Martin. “This might mean that a line shuts down automatically if somebody’s in the wrong place.”

Another focus is developing robots that sense the presence of humans. “We have to interact between the human and the machine,” says Martin, “and therefore, we need to have this worker safety component everywhere, whether it’s underground mining, or manufacturing on a line, or tuning a jet aircraft ready to fly across the world.”

Better processes
As Canadian manufacturers strive to become globally competitive, many are using advanced manufacturing methodologies like Lean and Six Sigma to streamline their processes, reduce waste, and become quicker to adapt to changing conditions. Some are now also turning to AI to further improve those work processes.

For example, AI can help companies apply the Lean principle of building quality into manufacturing processes instead of layering quality inspection later as an add-on. “A lot of metrics around quality are captured after we’ve made something,” says Gardiner. “AI helps people detect problems before they occur.”

AI can also improve supply chain visibility, allowing companies to practice Just-in-Time manufacturing – which aims to reduce production times as well as customer response times – with smaller inventory buffers and tighter time lines. “With IoT and AI, we might know when the components left, how many are on the truck, where the truck is, whether a snow storm will be a factor, and then the factories can start to interact with each other, and with the transportation system in between,” says Martin.

It’s important, however, to view the technology not as a panacea, but as a way to enhance what people are already trying to do. “AI is a very big term,” says Gordon, “so we need to get very clear on the use case and the problem that we need to solve.”