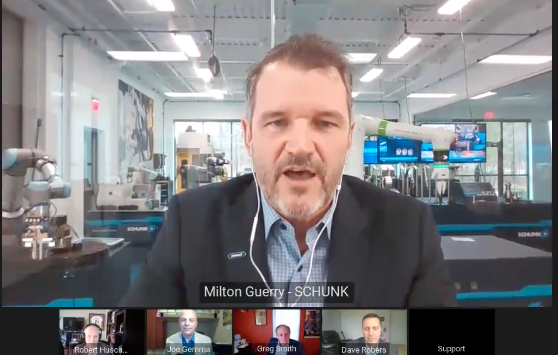 The Association for Advancing Automation (A3) hosted the online event Mar. 22-26 in place of the biennial in-person Automate Show due to ongoing COVID-19 restrictions.

In a roundtable on the state of the automation industry, Mike Cicco, president and CEO of FANUC America, acknowledged that manufacturers and vendors have been preoccupied over the past year with keeping production running and goods flowing, as well as with following safety protocols and ensuring employees are supported.

But all experts agreed that it’s time to plan for next steps.

“What this last year has really revealed is some things that we thought would be multiple years out, we’re doing them now. This probably won’t be the last big business continuity interruption that we will see,” said Christine Boles, vice-president, Internet of Things group at Intel Corporation. “Manufacturers need to step back. They have limited capital expenditures and they need to plan how they are going to incorporate them.”

With the pandemic underscoring the need for additional visibility across supply chains and on production floors, the use of technologies such as machine vision and artificial intelligence will increase, she said. “Manufacturers are recognizing that capability is critical to have in place. [They need to be thinking] what have I learned? What are some of the things I need to shore up?”

Patrick McDermott, president, North America for B&R Automation, said that partnerships will prove useful as companies begin to harness the technologies available to them.

Boles said that collaborations are also pushing the development of those technologies – but that vendors need to be careful to not overpromise capabilities without a common platform or standardization in place. “The industry has to work very differently together,” she said, citing how smartphones and apps work together on open platforms as an example. “Having a more foundational platform and approach will allow for the scalability.”

In a panel discussion on drivers of automation growth, Ted Dengel, managing director, operations technology and innovation at FedEx Ground, said partnering with vendors that are further along with commercialization will help to future-proof automation choices.

“To get real success out of the gate, you have to partner with someone who is ready to commercialize and ready to put [the technology] in and support it. It has to be a real savings, have real support and become part of your production process.”

“We are seeing companies accelerate their strategies but haven’t seen that translate to equipment yet, because it’s capital investment,” said KUKA’s John Bubnikovich.

Mark Lewandowski, director of robotics innovation at Procter & Gamble, echoed the need for a plan, but cautioned manufacturers against “islands of automation” that don’t offer the opportunity to connect between processes.

“Are there areas of robot standardization that can drive the industry to the next level?” he asked. “We need to get sensors and peripherals to connect as easily as a USB to a computer. It needs to be seamless.”

McDermott agreed during his session, saying that while information from connected assets “will have to be centralized, it’s going to be incremental. But that’s where our road map is taking us.”

Vendors also need to focus on the scope of the application, regardless of the size of the client, said Sebastien Schmitt, North America robotics division manager for Stäubli.

“There is no mid-size or small-size in what I see [for the future]. We all need automation. We all need to be able to access it,” he said. “It’s a question of adopting the technology, of training. Each and every organization has their level of readiness. It’s our duty as manufacturers to teach them and make it work for them.”

The experts advised that automation implementation is a journey, not a destination.

“When we started talking about it years ago, I thought adoption would happen at a more rapid pace,” said Cicco. “It’s clear that it’s a more challenging journey. But 5G and wireless will accelerate [adoption].”

“We are seeing companies accelerate their strategies but haven’t seen that translate to equipment yet, because it’s capital investment,” said John Bubnikovich, chief regional officer North America for KUKA Robotics. “There’s still a lot of fragility in the economy.” He estimated that automation investments will ramp up over the next two years.

The need for flexibility has made it difficult to use traditional automation in many applications, said John Dulchinos, vice-president of Jabil. Variations in product sizes and shapes require more advanced tools to automate, such as artificial intelligence, vision and machine learning.

“The industry doesn’t want a science project where you bring in these things and try to make it work,” said SCHUNK’s Milton Guerry.

In a panel discussion on collaborative automation, Milton Guerry, president of SCHUNK USA and president of the International Federation of Robotics, said that as collaborative robots incorporate those advanced tools such as AI and machine vision, suppliers will need to bundle solutions to get manufacturers on board. “The industry doesn’t want a science project where you bring in these things and try to make it work,” he said.

Cobots are a good entry point for manufacturers looking to automate processes at a lower cost, Guerry said.

Another way to automate without significant cost or time investments is 3D printing, said Dulchinos. He also stressed the need for manufacturers to understand the direction the market is heading. “It’s important to think about the long-term trends and align around those trends, like two-day delivery to compete with Amazon,” he said. “It’s key to be flexible.”

Boles sees a heightened need for more augmented and virtual reality applications coming out of the pandemic. “We’re changing way of the workforce – you can’t have experts everywhere,” she said.