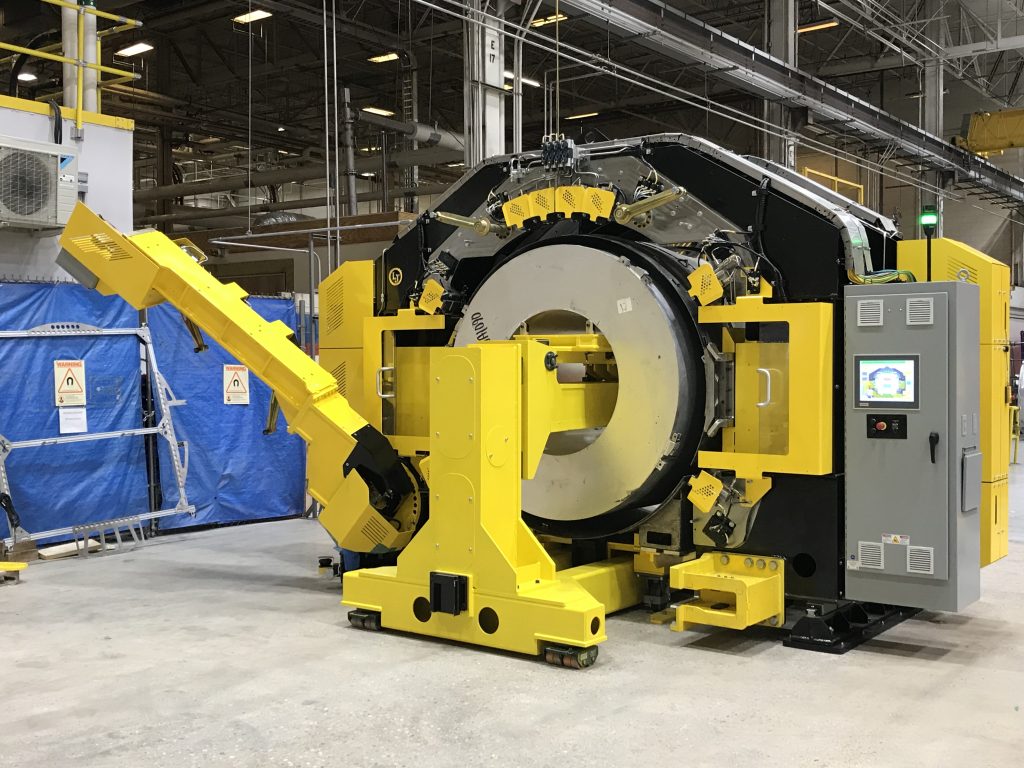 Oil and gas doesn’t appear to have much in common with the manufacture of medical equipment, but Edmonton-based LJ Welding Automation, which has roots in Alberta’s energy sector, had just the expertise that GE Healthcare needed to help streamline two key processes in its Florence, South Carolina plant.

The initial project involved the handling and welding of 5.5-tonne aluminum helium vessels that are a core component of magnetic resonance imaging (MRI) machines. The success of this led to a second project involving the design and construction of a universal rounding fixture – a 28-axis forming device that corrects minor deformities in vessels that routinely occur during shipping and handling.

LJ had begun to diversify when its current owners acquired the company in 2006. Because oil and gas is “one of the more technologically advanced businesses,” notes engineer and LJ co-owner Ryan Holt, the company’s specialty – delivering automated material handling and welding solutions for pipes and vessels – has proven to be remarkably versatile.

“Whether you’re welding a vessel for oil and gas or a helium vessel for an MRI scanner, the same principles apply,” says Holt.

In keeping with this vision, the creation of automation solutions at GE Healthcare is collaborative – input is received from all stakeholders, including the operators on the shop floor. “This wasn’t about delivering a shiny product,” says Holt. “These people wanted to own the technology and make it work, and that sets them apart.”

What the GE Healthcare production team was looking for was a way to create a Lean condition called single-piece flow, where the vessel flows linearly through the welding process uninterrupted, and then, once the welding is complete, exits the process at the opposite end of the work area, triggering the next vessel to be loaded.

When flow is achieved, the resulting improvements in speed, quality, safety and cost are often dramatic.

The previous process was executed in two stages. First, the vessel was placed by a crane on rollers, exposing two seam areas, which were welded manually. Then, the vessel was repositioned by crane to give access to a second area where welders completed the remaining two seams.

This extra handling of the vessel between steps was, from a Lean perspective, a barrier to one-piece flow, and the GE production team was looking for a way to eliminate the extra positioning of the vessel.

After a rigorous vendor selection process, GE settled on LJ, working in partnership with gas supplier Praxair. Although there were concerns about working with a Canadian vendor 3,000 kilometres away, LJ’s communication skills won the team over.

LJ’s engineers consulted with Praxair’s engineers and the GE Healthcare production team and then proposed a unique solution. Because the vessel is donut shaped, it was possible to secure it from the inside using an expanding grabber, exposing the entire work surface. This way, the welding could be completed without repositioning the vessel, making it possible to create flow and automate the welding process.

“You want everything to pull from behind it in order to grab the next piece,” says Kyle Russell, lead manufacturing engineer at GE Healthcare. “This is just what his solution does. I load the helium vessel on, and it’s a single piece that flows through the process. It then pulls the vessel that comes next, and that enters and moves along. So this really pushes us towards that single-piece flow mentality that we’re looking for.”

Interestingly, the biggest challenge wasn’t the automated welding, but the handling of the 5.5-tonne vessels. “You can’t deform the vessel, but you have to hold it firmly enough so that it doesn’t fall to the ground,” says Holt. “That sounds simple, but there’s a lot to it.”

To win approval, LJ demonstrated the concept to a multi-functional team using 3D-printed replicas of the production components, which GE Healthcare had produced from LJ’s computer-aided design models. The team bought in on the scheme, and LJ was given the green light. 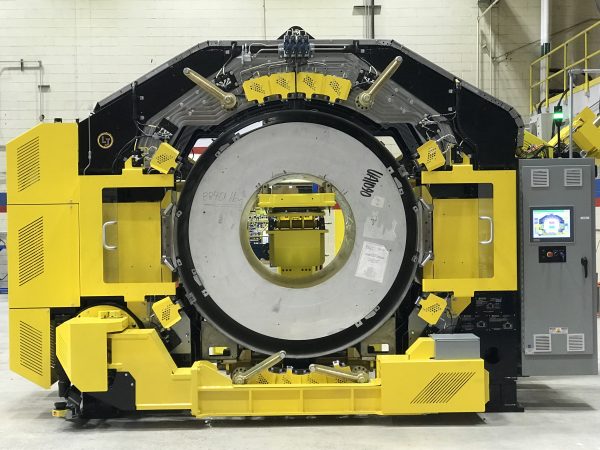 While the project boasted an ROI of 2.5 years, this was not about laying off production staff. In fact, the project is being used as a training exercise to help employees keep pace with technology.

“We look at this as an opportunity for people to grow their skills,” says Russell, “and a lot of our welders have opportunities to explore things that are traditionally done by what are considered higher-level jobs. For instance, they get to practice non-destructive testing methods like ultrasonic testing and die telemetry testing.”

Having deeper expertise in its ranks makes the company stronger, Russell says. “By making the company more robust we have the ability for more people to back check – and this really pushes us to the future.”

Following the successful improvements to the helium vessel welding process, the GE production team asked for LJ’s help in improving another process. Outer vacuum cylinders, which provide an insulating layer around the helium vessel, get distorted microscopically through shipping and handling but must be perfectly round to meet production standards. Rounding is accomplished by applying careful pressure in order to form the part to exact specifications.

In the previous environment, there were five rounding fixtures that were interchanged depending on the product that was going through the rounding area, and they were not configured to create flow. These issues were widely acknowledged on the shop floor.

“The site had been wanting to do this for a while,” says Scott Hasty, advanced manufacturing engineer with GE Healthcare, “and this was an opportunity to get it.” 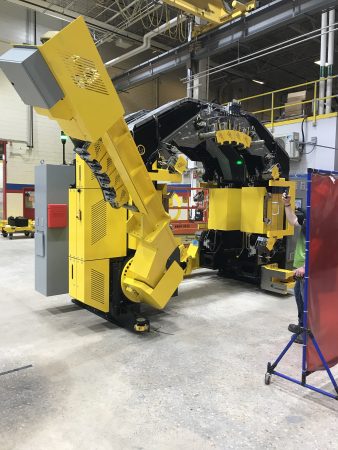 To gain a better understanding of the situation, the GE Healthcare production team went to the workplace and consulted through a process called Production Preparation Process (3P), a consultative methodology where a cross-functional team investigates the problem using Lean criteria.

“We did the 3P studies, and found that in order to create flow, we had to have common equipment across all products,” says Hasty. “If we could stick to that commonality, we could start reducing the amount of equipment required for that area. This would mean reduction in maintenance, fewer change-overs, and fewer fires to put out.”

The fixture design also needed to change. “Our existing rounding stations were all one-directional,” says Hasty. “You’d push the parts in, and then you pull them out in reverse. So you didn’t have any pass through.”

Hasty worked with the LJ team to develop a concept where the vessel could be loaded into the front end of the rounding station and, once the process was complete, flow out the back end. “We wanted to line it up in single-piece linear flow – just straight down the line,” he says.

As in the previous project, the process was collaborative, and operators provided many of the ideas for the final design. “My customers are the operators that have to use the equipment,” says Hasty, “so I have to gain their buy-in. Utilizing the people doing the jobs is one of the biggest things we’re trying to capture in this.”

The implementation, like the previous, has yielded some highly impressive numbers. Equipment and crane moves were reduced by 79 per cent, linear travel by 66 per cent, and floor space required for the process was reduced by 64 per cent.

Once again, this wasn’t an employee replacement project, but an opportunity for operators to focus more on what humans are best at and help the company move forward. “There are little things that have to happen that the operator can see and the machine cannot,” says Hasty.

Rather than feeling threatened by the technology, the operators are excited to take ownership of a very sophisticated high-tech solution. “People smile when they go to work on it,” says Hasty. “They got to be part of the factory testing. They were the champions for this, and now they are the experts.”

Hasty credits LJ for its role in the project. “This is not oil and gas, and it’s completely not welding,” says Hasty. “LJ took the bull by the horns and challenged themselves to get the job done. Communication was open, honest, transparent, all the way through.”

According to Russell, the lessons learned in these projects will likely lead to further process improvements. “GE Healthcare is always continuing to innovate,” he says, “so the future is wide open. We’re excited about this plant.”

A condensed version of this article originally appeared in the January/February 2020 issue of Manufacturing AUTOMATION.