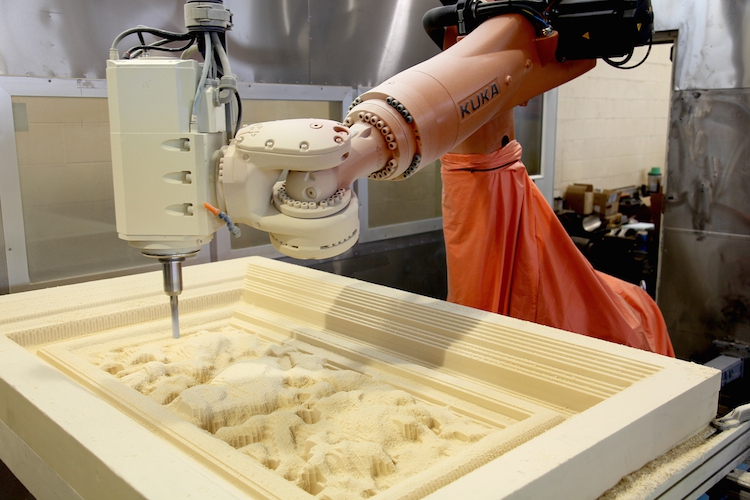 Oct. 13, 2015 – Robots are being used for so many applications across the country these days — vacuuming floors, decorating cakes, making any number of things in factories. It is all very futuristic, more so by the day, but robots are also playing an important role in connecting Canadians with their past.

First, the history. In 1857, when Ottawa, Ont., was chosen as the capital of the then-Province of Canada, a location for the buildings to house Parliament was called for. The powers-that-were selected the highest point in the centre of the city, a craggy hilltop overlooking the mighty Ottawa River. Soon the shiny copper roofs and Gothic Revival style of the three buildings made them a landmark that can still be seen for quite the distance. Centre Block houses the House of Commons and the Senate, with the West Block and East Block containing offices.

However now at more than 149 years old, Canada’s Parliament buildings are degrading, and robots are playing an important role — particularly with ornamentation — in the full ongoing rehabilitation of all three blocks over the next decade. “It is a fairly new approach to stone carving,” notes Pierre-Alain Bujold, a spokesperson for Public Works and Government Services Canada (PWGSC). It is the first time robotic reconstruction has been used at the Canadian Parliament, he says, although it is used extensively in Europe and beyond.

Starting point
The first stone piece that PWGSC decided to replace is in the East Block, weighing 2.3 tons and located over the entrance to the central courtyard. It features an owl among thistles, and was badly in need of replacement, with some areas of detail worn away by many decades of erosion and freeze-thaw cycles and other areas gone altogether.

To get started, PWGSC’s Heritage Conservation Directorate collaborated with Carleton University’s Azrieli School of Architecture and Urbanism to explore how new technologies might be applied. Carleton also brought in a subcontractor, New Age Robotics, with robots built by Kuka Robotics Canada, a subsidiary of Kuka Roboter GmbH in Germany.

It was an “exciting new challenge” for New Age Robotics of Ayr, Ont., as its 30 employees had mostly been building jigs for auto parts suppliers since the firm’s birth in 1989. “But that market fluctuates every few years,” explains Cornel Cosma, president. “So we decided to look around, and it occurred to me that investigating architectural work and art work might be a growing market, one that would shelter us from the ups and downs.”

In 2010, Cosma and his son visited Italy to see the architectural robotic sculpting being used there. They managed to create a system similar to that being used in Europe and using Montreal, Que.-based software RobotMaster, went to work — and the rest, as they say, is history.

How it works
The reconstruction process on Parliament sculptures begins with creating a digital copy of the existing statue or carving using photogrammetry, which would have been done in the old days through plaster casting. From that digital model, a copy of the sculpture is milled from high-density polyurethane foam using a 3-axis CNC router at Carleton. The next step is for a sculptor — in this case, the Dominion Sculptor of Canada (a sculptor hired specifically to look after the Parliament Buildings and similar federal sites) — to rebuild the damaged areas with modelling clay. Then, the carving is digitized again.

Once suitable milling parameters are determined, the final relief sculpture is milled from stone using the Kuka/New Age Robotics milling system to within 1 mm of the final image. Then the ‘Dominion Sculptor’ finishes it. “The variations in surface textures that are created with traditional hand-carving tools create a contrast of shadow and light on the sculpture,” notes Bujold, “adding depth when viewed from a distance.”

But if all that sounds easy breezy, it wasn’t — at first.

‘Hard’ challenges
“It was a big project with tougher challenges than we realized,” notes Cosma. “The stone was extremely hard, and at the speed we started with, our system was slower than a manual sculptor. We didn’t know the stone would be so hard — they [PWGSC] chose a very hard Berea sandstone so that the carvings going forward will last a long time — and we were wearing out tooling in minutes. The tooling was being imported from Italy, taking two to three weeks to get here, so it took too long and the labour and equipment costs were very high. We lost money during the experimentation phase.”

But New Age Robotics was determined to make things work. They built up their milling capability through constructing a sculpting system with seven axes — six on the robot with the robot on a turntable — so that the robot could successfully mill four-ton pieces. They switched to diamond carbide tips, and used an imported VEM spindle which is cooled from its centre. With all this in place, they eventually achieved robotic sculpting four times faster than manual sculpting.

New Age Robotics knew its system was very good, but in order to really demonstrate to new potential customers what the system is capable of, the company realized it needed to have a person on staff with artistic skills — its own Dominion Sculptor.

“In order to create a robotic sculpting system, you have to know robots, know your software, for example, scanning software, ZBrush, SolidWorks, Milling Software and you have to know how to cut stone,” Cosma explains. “But you also need to have an artist on staff. So I trained an employee with 3D software called RobotMaster and hired an artist. When we scan and mill, it looks very, very dull, but the artist brings it to life and reveals the potential of what our system can accomplish.”

Parliament Hill and beyond
Chris Claringbold, president of Kuka Robotics Canada, considers it an honour “to see our robot helping with the restoration of such an important building.” Beyond Parliament Hill, Kuka robots are being used in Canada in construction, architecture and other industries. For example, they mill molds for vehicle cabins of vehicles, and mill aluminum and carbon composite aerospace parts.

About 15 Parliament Hill sculptures are completed so far, but the work isn’t finished yet. There are about 4,500 interior and exterior sculptures, and many of them still need work. Cosma says, “We can finish a marble capitol in days now using Kuka’s 7-axis system. We learned, we tried different things, and we achieved success, just like we do with all our projects.”

“It feels good to be a part of the Parliament Building restoration,” he adds. “It’s something that will last at least 500 years.”

This feature previously appeared in the September 2015 issue of Manufacturing AUTOMATION.