Michigan-based Fisher & Company, an automobile seating safety systems and precision metal parts manufacturer, has chosen to deploy the 2X ApplicationServer for Windows Terminal Services to optimizing company-wide access to critical server-based applications. Its use will give the company’s users effective remote application delivery, supporting over 300 global users in company offices based in the United States, Mexico, Germany, India and Japan.

Network administrator Kevin McDaid is responsible for guaranteeing day-to-day mission-critical software access to company employees, regardless of location. The company had previously deployed nine 2003 Citrix Presentation Server 4.5 servers for the task; yet with an initial product cost of $75,000, not including $11,000 in annual maintenance fees, he became concerned with the constraints Citrix’s solution placed on his IT department budget. Through his switch to the 2X ApplicationServer solution, Kevin retained all of the functionality previously provided by Citrix at a total cost of about $12,000, including maintenance fees, a savings of 86 percent in operational costs. 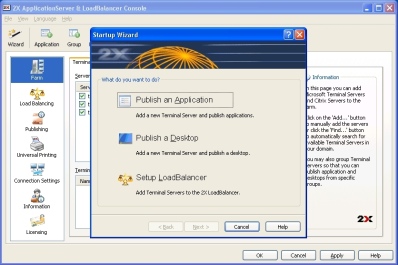 Additional savings from ApplicationServer accrued through increased server operational longevity. McDaid remarked that by choosing a 2X solution, his “servers can go a lot longer between reboots.” He added that he could “add more users to each server, which means I have less servers to administer,” not only reducing server administration and energy costs, but also saving him the time and hassle required to maintain larger server farms.

He was immediately impressed with the efficiency possible through a 2X solution, as ApplicationServer installation took approximately six hours, a stark contrast to the “two days required to install our nine Citrix servers, resulting primarily from Citrix-required policy updates and modifications.”

2X business development manager, Scott Sims, explained that the company was “proud that Fisher & Company chose 2X for their global application and desktop delivery. 2X ApplicationServer protects companies from exploding software maintenance and administration costs. To stay competitive, companies are becoming increasingly dependent on flexible and secure access to their applications and data from anywhere. With centrally managed and published applications, businesses can optimize access to their network.”

An example of the flexibility of 2X’s products is shown in the way their solution has effectively addressed the unique facets of Fisher & Company’s corporate culture. Many at the company occasionally avoid traveling to the corporate office, working instead from their respective home offices – yet they still require full-time network support for vital tasks, such as printing critical documents. To address this potential dilemma, the 2X Universal Printing driver, which is automatically included with the 2X enterprise license, provides users print capabilities regardless of location.

“Our printing problems have disappeared since we started using the 2X ApplicationServer with Universal Printing,” McDaid said.

Perhaps more important is the way the 2X solution was seamlessly integrated with existing company processes, since out of the hundreds of users occasionally working from home offices, all have “been able to map to their local printer without any problems.” Though McDaid typically expects occasional product functioning glitches, such as the fact that “printing difficulties were a constant issue with Citrix servers, he was pleasantly surprised that while his cost savings were significant, the less expensive 2X solution also provided improved functionality.

McDaid also appreciated the freely distributed 2X ThinClient Operating System included with his purchase. To address specific needs within the company, it retained a number of custom-built computers, for which new operating systems would ordinarily have to be purchased. Utilizing the ThinClient Operating System with the 2X ApplicationServer allowed these computers to operate effectively without the need for additional operating system purchases, which he estimates has saved the company “roughly $100 per unit so far.”

Though valuable in cutting corporate operating costs, McDaid sees such additional features as indicative of 2X’s commitment to addressing corporate remote application publishing needs as a complete, effective solution, stating that the “2X team was effective in not only addressing my individual product issues, but also finding a comprehensive solution to my remote application computing needs as a whole.”

The success has encouraged McDaid to pursue increased engagement with the company to provide similar solutions in the future. He states that he trusts 2X to provide him with “effective solutions that improve and simplify server-based computing issues,” and that he looks forward to implementing 2X products and services in the future.