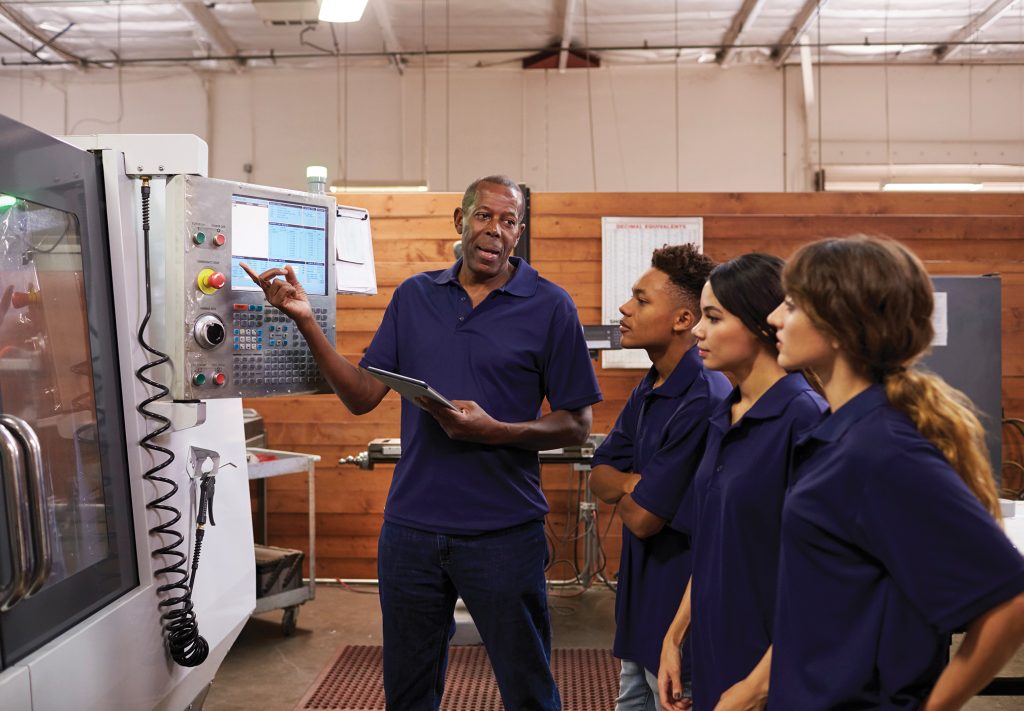 As I continue to share the top 10 tips I gleaned from industry-leading manufacturers over my 40-year career, I almost missed sharing this one.

When it comes to digitizing processes on the plant floor in the pursuit of achieving “Industry 4.0” objectives, it occurred to me that many of my most successful customers had benefitted from the youthful, tech-savvy enthusiasm of college students working under the direction of the plant manager, getting ideas put into action that the manager, or his seasoned staff, was not able to do as effortlessly themselves. New technology has its advantages, but it is not as exciting to the ‘more seasoned’ crowd as it is to the younger generation that embraces it naturally and enthusiastically.

About a year ago, I was doing a presentation to a company that has three plants and about 500 employees. The owner of the company was still involved and was at the meeting along with his plant managers, continuous improvement manager, IT manager, chief financial officer and a few others. Almost as a tag-along, one of them invited their co-op student to the meeting, likely because it was his responsibility to keep the co-op student gainfully occupied for that four-month term.

The demo went well and there were questions from all the different managerial perspectives; can the system do this? Can it show that? Can I have all this in one report? Can one person have this dashboard and another that dashboard? How do you build dashboards? How easy is it to create different report templates? To answer the first few questions, I demonstrated step-by-step how those requests could be done. After a few questions, I deferred to the co-op student, asking “Is this something you think you could do?” to which he replied affirmatively. Within minutes, all sorts of new ideas and suggestions came up from around the table, directed as much at the co-op student as at me.

A short time later, we closed the initial deal for the first plant, and as part of the onboarding process, we trained the co-op student along with the others. The results were outstanding and near immediate. The dashboards they set up were unique to their operation and their respective roles. All three plants were autonomously run and had their own ways of doing things, but “corporate” (in this case, the owner) got the desired real-time and period reporting information from all three plants in a consistent format. The ‘magic’, in this case, was more than the technology. It was the co-op student, working in conjunction with the owner and plant managers.

The seasoned veterans knew their respective plants and roles inside and out. They are very smart and accomplished people, but new technology often seemed foreign to them. It wasn’t critical to their day-to-day priorities and having to learn it often made them feel ‘stupid’ – which for me is the biggest mistake any software company can make. (Never make the smart people in the plant feel stupid, and never make people look smart just because they know which way to swipe or what special jargon to use). At best, senior people only have enough time (and interest) to want to be taught how to use the system, not how to configure and tailor it. They leave that to other people in the organization (like the IT department), and those people are likely already overly busy or occupied. The co-op student, however, has no predisposition to existing information technology solutions, or any manufacturing processes for that matter. It makes them the ideal person to explore new ways of collecting, analyzing and displaying information for all levels of the management team, and the folks on the floor.

In this particular case, the co-op student gained tremendous insight into all the aspects of the manufacturing process, hearing what the needs were and developing the templates and reports, and the management team saw their best practices and insights properly leveraged and baked into a system that is useful and beneficial to them every day. The managers weren’t forced to adjust their thinking to the format and standards of existing systems but instead were able to get the information and metrics in the way they wanted and in line with how they saw their manufacturing operation run.

It was truly a win-win-win. The co-op student gained tremendous knowledge and a tactile education in manufacturing. The managers gained real-time information delivered to them in ways that mattered to them. The plant benefitted by seeing insights extracted from data quickly and then put into action and driving results. Plus, they now have first dibs on an excellent long-term and highly effective employee upon graduation.

This article originally appeared in the March/April 2022 issue of Manufacturing AUTOMATION.