Alicia Butty is a welder working at Butty Manufacturing, her family’s custom fabrication business near Brantford, Ontario. The company engineers and builds automated production equipment such as tire cutters, which are shipped around the world.

In her off-hours, Butty is known as Canadian Welder Girl – a personal brand she created for herself to showcase her artistic metal creations (follow her on Instagram at @Canadian_Welder_Girl).

Butty spoke to Manufacturing AUTOMATION about her experiences as a young female welder – and how automation is a good thing for welding. Check out the video of Canadian Welder Girl at work at the end of the article.

Manufacturing AUTOMATION: What drew you into the trades?

Alicia Butty: On the weekends, I would come here to the shop and do my own little projects.

I always was here when I was younger. I would come to the shop and I could just hang out with my dad’s workers, and I learned a lot more.

MA: How did you get into welding specifically?

AB: My father and uncle, who own the company, would teach me some little tricks. I would just search online for cool projects and be like, oh, how can we build this? I also grew up in a family that if you want something, you build it yourself rather than just going and buying it.

I went to Wilfrid Laurier University for two years. [My family] did not want me to go into the manufacturing field or the welding field. [My dad] knows how rough the trades are. They were like, go to university, go to college – do something that’s not welding. 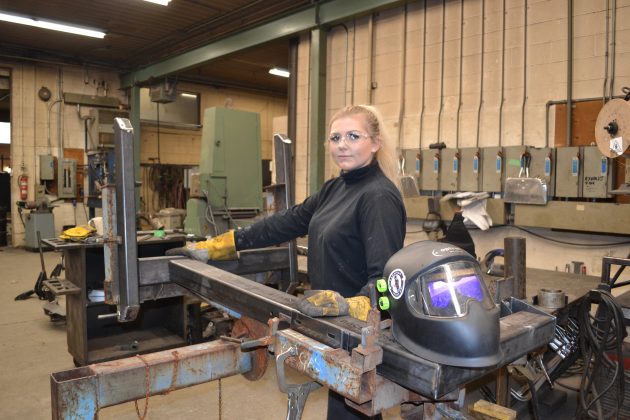 MA: Was that because you’re a woman?

AB: Female or male, he knows how rough the trades can get and how hard the job can be. And how frustrating it is on your body.

When I was in my going into my third year of communications [at Wilfrid Laurier], I suffered from a concussion. It was hard for me to focus at university and I was really bored at home, and the doctor recommended I take a course. Any course, just to keep my brain going. I was like, okay, I’m going to go into welding.

My brain could relax. It was not so much theory. You can never be over-educated, but university just wasn’t the career for me.

MA: Where did you take the course?

AB: I went to Mohawk College for introduction to welding. Six months in, a recruiter from a company hired me and I went because they would train me for my weld tickets at the Canadian Welding Bureau.

I started as a welder there and then I got moved to inspector – so I was inspecting, looking for defects in the welds, and repairing.

MA: How did you end up at the family business?

AB: [In November 2019] I decided to leave that company and come work at Butty Manufacturing. Right out of school, I wanted to work here, but my dad said no, you need to go get other experience rather than working for me. I get it now. I learned a lot over there.

I hope to take over Butty Manufacturing. That’s basically why I’m here, to train to!

MA: What is your role here?

AB: I am going through drawings to make sure they match – because sometimes there are little hiccups in drawings that we have to fix. My uncle says I have to start from the very bottom to learn the company. Every day is different, and right now I am learning the business.

MA: What’s been your favourite thing working as a welder at Butty so far?

AB: Learning. In my last job, it was production work. So once you knew that product, you knew the rules and it was the same thing every single day.

It’s also the satisfaction of building [the equipment] from the base metal to a product that works well and that someone’s going to use.

MA: On-the-job training is very important in the trades. What has been the most valuable thing that you’ve learned?

AB: The little tricks that welders and people in trades start to learn and pass on to other people. There was one trick I didn’t know – if you have a gap between your two pieces of steel and you put a tack on that and then hammer it in, the weld actually pulls the steel together.

You either hop on the robotic train or you’re left behind. You have to stay up with technology.

MA: You were recently at FABTECH in Chicago. It was your first time there – what was new and exciting in welding that you saw?

AB: Everything’s robotic! I know a lot of welders hate that; they hate robotic welding. When I posted a video on Instagram about a robotic welder, I had some messages saying, “Robots are taking my jobs.” But they’re not! They’re taking the jobs that you don’t want to do in general. It’s the repetitive, over and over again stuff. You don’t want to do it.

If I were a business owner, I would want to be more productive. Because you have someone that shows up every day, right? That robotic welder can run 24 hours. You either hop on the robotic train or you’re left behind. You have to stay up with technology. 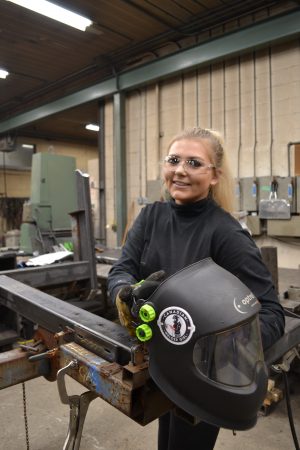 MA: Where do you see then the human welder fitting into all of that?

AB: So example, my dad’s place. Custom welding. We’re not making hundreds of thousands of one product.

MA: On Twitter, there was a video of you visiting the Universal Robots booth at FABTECH. What was that experience like?

AB: It was super cool. For pipe welds, they had a camera in inside a welding tip and you could watch your weld. A lot of robots, you just set it up and leave, but this one, you could see your weld going and you could go left or right.

The best thing is about FABTECH is the equipment is actually being used. It’s not just a stand.

MA: Tell us about your side project as Canadian Welder Girl.

AB: I was always an artsy person. Growing up in a manufacturing family, I think this is how arts and the trades combine for me. The possibilities are endless.

My job at Butty is flexible [based on when orders come in], so I can have time to work on passion projects.

Through social media, a lot of girls have messaged me, and they’re like, hey, I’ve never tried welding before, but it looks really great. They ask me, how are you liking it? What are your struggles? I like that.

AB: Yeah. And then three other girls I pulled in my last job, they had no welding experience at all. I just talked to them and convinced them to go into the trades.

I think girls are intimidated by the trades. One of the reasons I feel comfortable with it is because I grew up with the family in it. But if you don’t have a family or friend that can show you how to do everything or what is actually like, it’s hard.

I don’t know if the trades are harder on girls, but they’re also hard if you’re young. If you’re the 18-year-old, fresh out of school, and you come into the shop, they’re going to be hard on you, too.

MA: Is that something that you would have identified as a challenge for you?

AB: The biggest obstacle is people taking me seriously. Especially with inspection. At my last job, the more times the workers could get [product] out the door, the bigger their paycheque was that week. It could fluctuate $100.

I was the only inspector and I was the one holding them from that paycheque. I would tell guys that are twice my age, “I’m sorry, I can’t pass this weld because this has been missed.” And they say, “You’re half my age, you don’t know what you’re talking about.”

I don’t know if the trades are harder on girls, but they’re also hard if you’re young. If you’re the 18-year-old, fresh out of school, and you come into the shop, they’re going to be hard on you, too.

MA: What would you suggest to a young person looking at the trades? How did you overcome that?

AB: Be confident in yourself. Ask a bunch of questions. I think sometimes people get pressured and they don’t ask questions because they’re embarrassed. Or they think it’s a silly question. Show that you want to learn.

This interview has been condensed and edited for clarity.

See Alicia Butty on the job in the video below, and watch for Manufacturing AUTOMATION’s story on Butty Manufacturing in an upcoming issue of the magazine.

Related
Builders and dreamers: How young women are bridging the STEM skills gap
Builders and dreamers part 2: diversity and inclusion key to solving shop-floor worker shortage
PODCAST: How to develop manufacturing partnerships to boost innovation
All in the family: Automation builder looks to the future
Tags