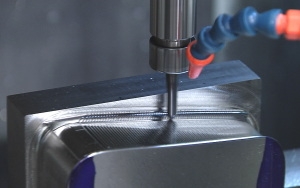 The Company: Windsor, Ont.-based NeoVision Technology Inc. is a leader in the machine, tool, die and mould market. Launched in 2005, the company and its staff of more than 20 manufacture injection moulds for a variety of industries, including the sports and automotive industries, at its 10,000-sq.-ft. facility.

The Challenge: To compete with lower labour costs overseas, and bring back work from lower cost countries, NeoVision needed to adopt a solution that would allow it to machine quickly and accurately. The company had to find a better way to cut and manufacture.

The Strategy: The team decided to implement PowerMILL CAM software from Delcam.

“PowerMILL was an essential part of my business plan. I wasn’t going to move further in this very competitive market without it,” says Phil Malenfant, president of NeoVision. “It allows us to machine quickly and accurately, and not have to go back to re-manufacture.”

The Results: The new toolpath editing options in PowerMILL makes it much easier for NeoVision to produce parts – especially multiple copies of any duplicated item, for example, when machining a series of cavities into a mould tool.

“We can now specify an array of multiple copies in one operation, using approaches such as a number of rows and columns or a radial spacing around a central point. Once the copies have been produced, the complete series of toolpaths can be re-sequenced to minimize tool changes,” says Tom LeMire, a CNC machinist at NeoVision. “The different machining strategies allow us to be more creative and make changes on the go. It is that easy.”

“Since we’ve been machining the way we are now, we’ve actually brought work back from the low-cost countries. So that work that we were losing, we’re gaining back,” says Malenfant. “PowerMILL [is] a big part of that.”

This case study ran as part of the 2011 Software Case Study Guide in the September 2011 issue of Manufacturing AUTOMATION.