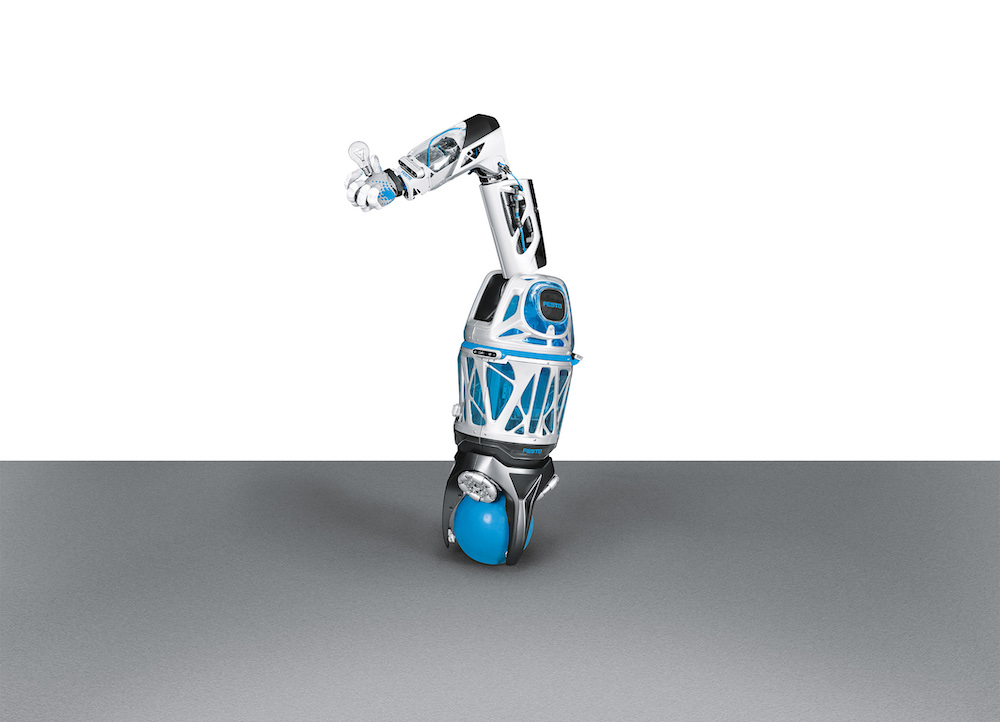 Festo has developed the Bionic Mobile Assistant robotic helper, which mimics the gripping ability of the human hand.

The Bionic Mobile Assistant includes three major subsystems: Bionic SoftHand 2.0, an upgraded version of the pneumatic gripper first presented by Festo in 2019 that mimics hand movements and actions; the DynaArm electric robot arm on which Bionic SoftHand 2.0 is mounted; and a ballbot for 360-degree mobility.

The researchers envision the Bionic Mobile Assistant on the assembly line performing ergonomically strenuous or monotonous tasks, or as a personal assistant or service robot.

The fingers and opposable thumb are made of flexible bellows structures with air chambers, surrounded by a firm yet yielding knitted fabric. This makes the hand light, adaptive and sensitive, yet capable of exerting strong force. The pneumatic fingers are actuated by a compact valve terminal, with piezo valves, mounted on the hand.

Making the thumb and index finger longer than in Bionic SoftHand 1.0 increased the lateral swivel range of both fingers. They now work well together and grip with great precision.

Thanks to a 3D-printed wrist with two degrees of freedom, the hand also can move both back and forth, and left and right for a very tight gripping radius.

To increase the stability of the fingers, each air chamber contains two structural elements that act like bones. A bending sensor determines the positions of the fingertips. The hand also wears a glove with tactile force sensors, which allows it to sense the nature of the item to be gripped, and adapt its gripping force accordingly.

The hand also has a depth camera inside the wrist so it can visually detect objects and grip them, even if they are partially covered.

The Bionic SoftHand 2.0 is mounted on the electric DynaArm, which can carry out fast and dynamic movements due to its lightweight design with integrated drive modules that weigh one kilogram.

The ballbot is actually a drive that the robot balances on, allowing the Bionic Mobile Assistant to move freely in all directions. All energy supplies are on board: a battery for powering the arm and robot, and a compressed air cartridge for the pneumatic hand. The robot can work autonomously, orienting itself independently in three dimensions using two cameras.

The Bionic Mobile Assistant is currently in the concept stage and is not yet commercially available.