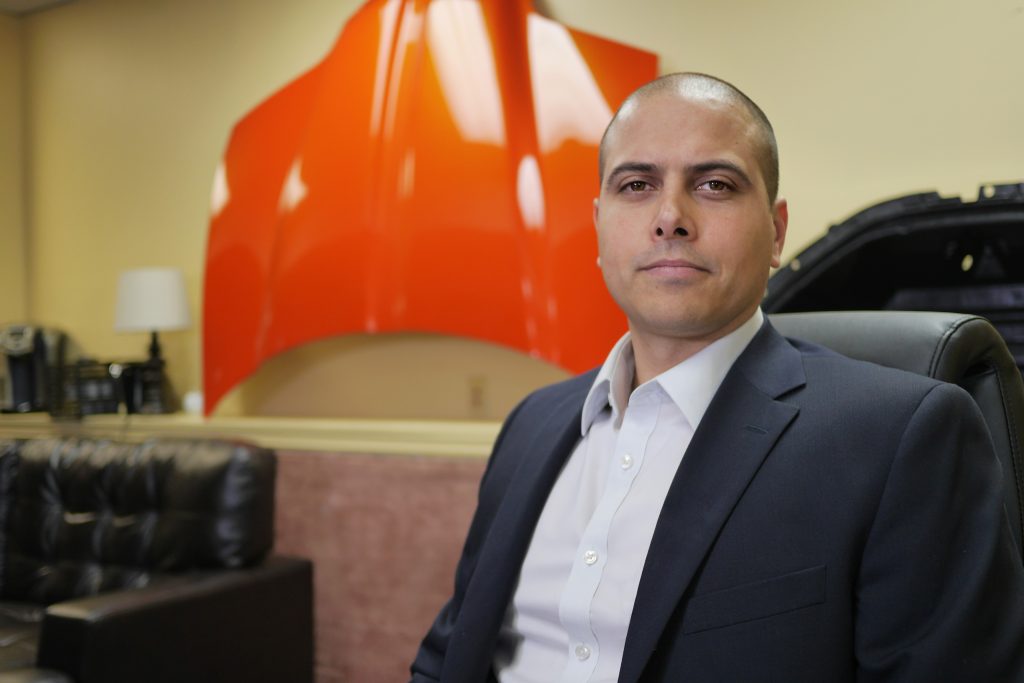 A quick turnover for a Tesla order prompted Windsor, Ont., tooling company LAVAL to purchase its first two robots five years ago. When the electric vehicle maker asked LAVAL to deliver 1,000 parts for the Model X in a month’s time, president Jonathon Azzopardi says he knew there was no other way to get the work done.

Not only have the robots not stopped operating, they’ve been joined by two others, as well as a host of other automated solutions, such as a hot air oven, a portable measurement arm, and seven presses ranging from 250 to 2,000 tons of power.

“Robots have allowed us to do the things that human beings are incapable of doing,” explains Azzopardi. “You can’t design for human error. You can somewhat predict it, but human error exists no matter what. Robots allow us to be able to move past that.”

If robotics and automation setups in a mouldmaking company seem novel, that’s because they are. They’ve also been essential to the company’s survival. LAVAL has been laser-focused on broadening its scope beyond traditional mould manufacturing over the past decade.

The company was founded in 1975 as Laval Tool & Mould by Jonathon’s dad, Larry Azzopardi. In the years after its inception, Laval Tool & Mould designed and built injection moulds for the automotive industry. But by the early 1990s, the company had lost a significant chunk of business to lower-cost countries, Jonathon Azzopardi says.

“This transition, although slow, has had a huge impact on the Canadian mouldmaking industry,” he says. “It has forced mould makers to think in different ways, and to come up with ways to stay relevant and still retain market share.

“The route we took was to come off of the crack cocaine we call the automotive industry,” he laughs. “That is only about 30 percent of our business now.”

The youngest Azzopardi took over the family business in 2009, and now employs 80 people at two locations in Canada. The company still offers injection moulding for specialized projects, but focuses primarily on compression moulding with a thermoplastic and thermoset  process using traditional materials as well as new options such as biocomposites, renewable polymers and carbon fibre.

The tail of the company has grown longer, too – instead of solely manufacturing moulds, the company (still formally called Laval Tool & Mould but now operating as LAVAL) takes responsibility for the entire part by performing the processes that occur before and after the mould.

And that’s what has pushed the company to install technology more commonly used by engineering firms and Tier 1 manufacturers, not mouldmakers – the benefit to clients being that outsourcing these processes can save costs and reduce disruption on their own shop floors.

“I create processes in a box,” says Azzopardi. “My primary role, as a company, is to de-risk the composite solution journey for my clients. That means I must be able to do everything that they would normally do.”

This includes product prototyping that moves a part from engineering and moulding through to assembly, using simulators to predict a product’s quality or longevity, and production documentation, customization and assembly. LAVAL will also sample products at volumes on a longer-term basis – for example, the company produced and shipped parts directly to an automotive manufacturer for two years before LAVAL’s actual client, Magna International, was ready to bring the part production in house.

“When you’re responsible for the parts themselves, not the piece of equipment, your scope of risk and your scope of influence is much larger,” Azzopardi says. “In the engineering phase, I now have to go through a full failure and mode analysis, and actually make sure it’s strong enough or that it looks nice enough, or that it can actually go through the process without any obstacles. I have to make sure it’s mouldable, so I have to look at that part totally differently.”

LAVAL embarks on an engineering review at the start of every project, redesigning and reengineering along the way until they have a working sample for the customer.

“Now I need to build the whole process – so that not only requires moulds, but also it requires press, it requires material verification and selection. It requires all of the fixtures that part depends on,” Azzopardi says. “If a part warps, if it needs holes, if it’s discoloured, if it gets scratched, if it has any deformations or imperfections – we’re responsible for all of that now.”

This has been a key ingredient in LAVAL’s secret sauce: state-of-the-art technology is propelling the company toward a more flexible future.

Azzopardi sees the market trending toward regional flexible manufacturing, where production is localized and the processes and products vary within one facility, all using the same machines and tooling. As such, he’s purposefully designing LAVAL that way, too.

“Say the GM Oshawa plant could make cars, but it could also make industrial air conditioners – sounds totally crazy, right? But we do it every day at LAVAL,” Azzopardi says. “We’re not doing full assemblies like they would be – we’re doing a small fraction of that – but it shows that you can actually do it. You can have a product mix in the same space at the same time if you set yourself up for it.”

Azzopardi admits that building out flexibility comes with challenges because the technology hasn’t quite caught up with the vision. “Simple things like cables hanging down from a robot – if you’re doing the same part all the time, you can put those cables in one location and they’re safe,” he says. “But as soon as you stick a different part in there, now the cables are in the way because you didn’t predict all possible outcomes. Now, we have to figure out the technology to get these wires out of the way. We’re still working through it.”

The company has had to source robots that are universal enough for a variety of processes, and, consequently, that they have enough facility space to accommodate the setups. LAVAL is also collaborating with multiple stakeholders on digital commissioning, or a digital twin, that will provide the level of flexibility the team needs. Getting to a stage where they can plan the entire engineering and production process virtually first means that they won’t waste time and money proving out physical prototypes, and that they’ll be ready to go when the project hits the shop floor.

LAVAL is working with St. Clair College, NGen Canada, the National Research Council (NRC), Siemens and InCycle Automation Services on the digital commissioning research project, which involves the use of simulation software, RFIDs, vision and other automation technologies to evaluate processes, parts and fixtures.

“It will look for problems and make adjustments on the fly without a human being actually having to be part of the solution,” says Azzopardi. “The computer and the robots do it all.”

The goal is to have production cells that can immediately recognize fixtures and parts and adjust themselves automatically. “Today it costs us $5,000 every time we put a fixture in, because it has to be all recalibrated and re-set up,” Azzopardi says. “We want to be at the point where you can drop any fixture in there and as long as it’s been programmed off site and [the machine] knows what it is, it’ll go ahead and run.”

Flexible manufacturing is the way forward not just for LAVAL, but for companies across the country, Azzopardi says. He sees it as Canada’s ticket to competitiveness in the global marketplace, since it demands high quality but also carries relatively high risk since it involves investment and low volumes. In order to achieve flexibility, Canada – individual companies, industry and the supply chain, all levels of government – will have to think differently about how it leverages its facilities, technologies and geographic location.

“And they are – there are a select few who are doing a great job of that,” Azzopardi says. “But there is another group that is just doing the same thing they were doing 50 years ago, over and over again. And those are the ones that are going to disappear.

“We have a rule here at LAVAL – if you’re not moving forward, you might as well be going backwards.”

Kristina Urquhart is the former editor of Manufacturing AUTOMATION.

Related
ITC Electrical Components marks 25 years in automation
Pivoting in a pandemic: How flexible production helps retooling efforts
Preparing for recovery: Steps for manufacturers to emerge from crisis
VIDEO: Looking back on the automation market in 2020
Tags