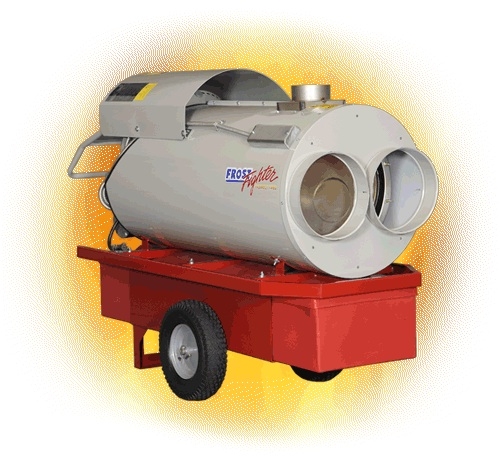 The Company
Frost Fighter had its origins as part of a public company, ICG, in 1965. In 1985, it was sold as part of a private company and operated as a Division of ICE Manufacturing until 2011 when Frost Fighter was incorporated as a separate business entity. Its present manufacturing facility is over 60,000 sq. ft., and is located in Winnipeg, Manitoba.

The tremendous growth of Frost Fighter to become the industry leader in commercial portable heaters is attributed to its continuous innovation and development of the most advanced engineering designs, tailored to best meet its customers’ needs. Frost Fighter is at the top of industry standards in terms of efficiency, dependability and safety. Its proven designs pay off in low-cost reliable performance.

“Our heaters are designed to withstand the harshest weather conditions in the world,” says Bill Speers, Frost Fighter’s CFO. “A lot of our product goes to oil sands projects, mining, and construction. Most of the companies which use our equipment are in the resource sector, and most of our sales go to industrial-equipment rental companies.” Frost Fighter sells primarily into the United States and Canada.

The Challenge
While still a division of its parent company, Frost Fighter was managed on a legacy Syspro ERP platform.

“Our parent company was several versions of Syspro behind,” says Speers. “Once we’d split off, but while we were still running on the legacy version, we performed our due diligence and looked at several different ERP solutions.”

The Solution
In the end, Frost Fighter decided to stay with Syspro.

“Syspro 6.1 resolved most of the issues that were important to us,” Speers says. “In addition, Syspro has very strong support in Winnipeg. After four months on the old version we began the implementation, which included moving our history over to 6.1. Now we have live General Ledger and all the benefits of a modern ERP.”

Frost Fighter’s ERP implementation was made easier and quicker by the decision to stick with Syspro.

“Ideally, when you look at changing systems, you take a year to plan and select the software. Then you move through periods of transition and testing before you’re up and running. We wanted to accelerate the process, and we ended up accomplishing the whole project in four months. What helped was the fact that our data conversion went quickly because we were staying with Syspro, and because the Syspro supplier in Winnipeg lent us their considerable expertise. To be honest, I was expecting a wheel or two to fall off – but none did,” Speers says.

The year following the implementation was a time of rapid change. “Our employees were not used to relying on an ERP as much as they do now, and it took us a year to get up to speed. We needed to get our inventory correct, optimize our Bill of Materials and ensure the consistency of address fields. A number of new employees joined the company and were able to figure out Syspro without too much difficulty. In addition, a few of the employees from the parent company came with us, and that made the learning curve a lot shorter. It’s an ongoing job to use the system better, but we’ve come a long way.”

The Result
With the implementation under its belt, Frost Fighter took the next logical step: Syspro Mobile’s bar-coding solution.

“We have about a dozen different models of heater, all serial numbered for CSA and ETL certification. Because heaters use fuel and are potentially dangerous, we have to be specific about models, and be able to trace each heater through manufacture and testing,” Speers says.

In the past, Frost Fighter had a manual system for serial numbers, and errors accrued from having to manually enter a 10-digit serial number about six times. Now that its moved to a bar-coding solution, the serial number is entered directly into Syspro when the unit is tested. This initializes the back flushing, which receipts the finished product into stock, posts the relevant labor transactions, and records inventory depletions based on the Bill of Materials.

“In addition, we can now use Syspro Mobile to pick the serial number off the shipping document, forward it to the person who prepares the invoices and have it auto-populate the invoice. That facilitates efficient order processing and shortens the time to invoice. Moving to Syspro Mobile took some work, but it’s created huge savings of time and effort,” he says.

According to Speers, the challenge for Frost Fighters is to learn how to use a fuller range of Syspro’s capabilities.

“Syspro 6.1 has helped our processes immensely,” he says. “Implementing Syspro Mobile was a big change that really helped our efficiencies, but there are many other examples. We chose to install the Electronic Funds Transfer module, for one. Now payments to suppliers can be made electronically, and that’s been a plus. Not only are our suppliers appreciative, it’s now more cost efficient to process our accounts payable.”

“When I’m looking at an ERP system, I want to be confident that it will meet our needs 10 years down the road. Syspro has really kept up with the changes that have happened in business and technology,” Speers replies. “Twenty years ago you had to make a lot of modifications to fit an ERP to your business – and there weren’t many ERPs that were suitable for a SME (Small to Medium-sized Enterprise). Syspro has a strong commitment to SMEs, and to staying at the forefront of ERP technology. So would I recommend Syspro? Yes – I definitely would.” Watch the Frost Fighter Video here.

Related
How agile are you?
ERP buyer’s corner: Making 2011 the year of ERP success
SolidWorks CEO Jeff Ray promoted; replacement named
SaaS ERP is coming of age – But is it right for your business?