August 26, 2017  by The International Federation of Robotics 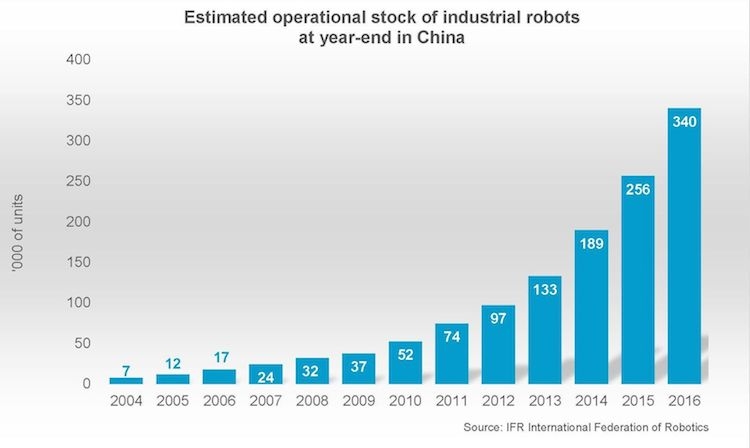 From 2018 to 2020, a sales increase between 15 and 20 per cent on average per year is possible for industrial robots. Annual sales volume has currently reached the highest level ever recorded for a single country. Within a year, sales in China surged by 27 per cent to 87,000 units (2016). The operational stock of industrial robots marks the highest level in the world. At the same time, Chinese robot manufacturers expand the market share in their home country.

These are the results published by the International Federation of Robotics (IFR) ahead of the World Robotics Report 2017 to be released on September 27.

“China is by far the biggest robot market in the world regarding annual sales and regarding the operational stock,” said Joe Gemma, IFR president. “It is the fastest growing market worldwide. There has never been such a dynamic rise in such a short period of time in any other market.”

Electrical and electronics industry are the main drivers
The main drivers of the latest growth in China are the electrical and electronics industry. Sales increased by 75 per cent to almost 30,000 units (2016). About one-third of the robots were produced by Chinese robot suppliers, who more than doubled sales by almost 120 per cent. All international robot suppliers also increased sales considerably to the electrical and electronics industry (59 per cent). This demand will further grow in the future, remarks the IFR. Major contract manufacturers of electronic devices have already started to automate production. The semiconductor and the chip industries, for example, have strongly invested in automation, according to the IFR, adding that large battery production facilities are being installed to meet the increasing demand for electric and hybrid cars.

Car industry lost its pole position
The automotive industry lost its pole position to the electrical and electronics industry, but is still a powerful driver for industrial robot sales. China has become both the world’s largest car market and the world’s largest production site for cars — including electric cars — with much growth potential. Sales to China made up 25 per cent of the global supply of industrial robots to the automotive industry in 2016. Between 2011 and 2016, a total of 108,000 units were installed, representing an average increase of 18 per cent per year. The market share of Chinese robot suppliers in the automotive industry is still on a rather low level but has increased from 10 to 13 per cent. China is the largest growing consumer market with increasing demands for all kinds of consumer goods. Consequently, various other industries have also started to expand capacities and automate production.

Some international robot suppliers have already launched production plants in China and in all likelihood more will follow suit in the coming years. Most industrial robots in China are imported from Japan, Korea, Europe and North America.

Chinese outlook 2020
The Chinese government wants to transform China from a manufacturing giant into a world manufacturing power according to the 10-year national plan, Made in China 2025. The plan includes strengthening Chinese robot suppliers and further increasing their market shares in China and abroad. China intends to forge ahead and make it into the world’s top 10 most intensively automated nations by 2020. By then, its robot density is targeted to rise to 150 units – this being the number of industrial robots per 10,000 employees. Today, Asia is the leader regarding robot density is South Korea, with 531 robot units. In the Americas, it is the U.S. with 176 robot units and in Europe, it is Germany with 301 robot units.