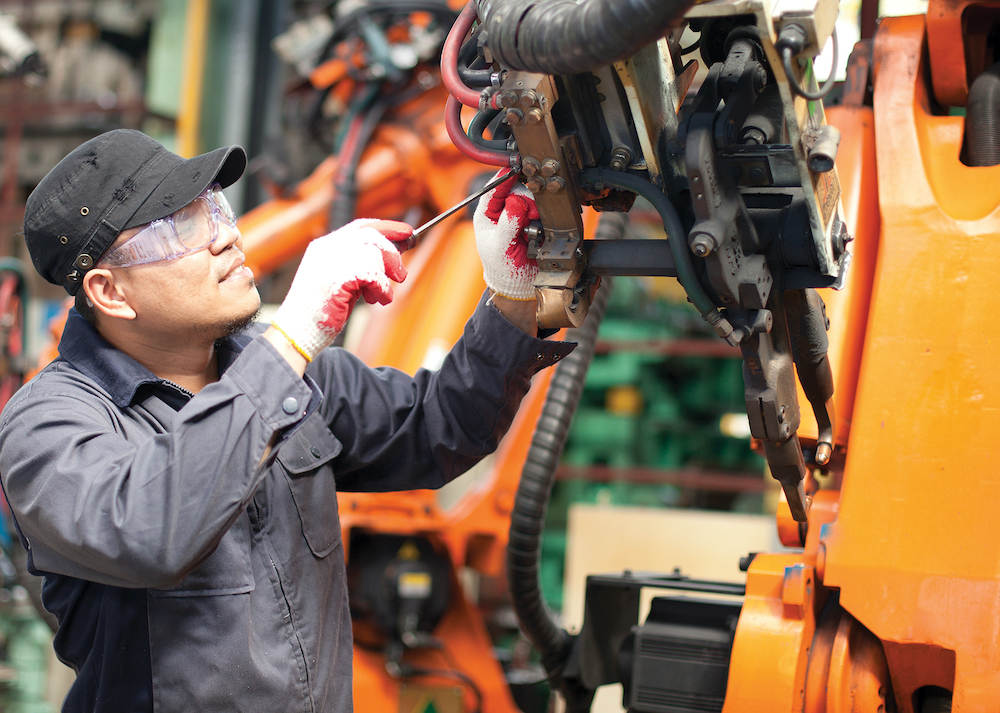 A new report by the International Federation of Robotics (IFR) indicates there is a record 2.7 million industrial robots operating in factories around the world – an increase of 12 per cent over 2019.

The World Robotics 2020 Industrial Robots report says that sales of new robots remain on a high level, with 373,000 units shipped globally in 2019. This is 12 per cent less compared to 2018, but still the third highest sales volume ever recorded.

“The stock of industrial robots operating in factories around the world today marks the highest level in history,” says Milton Guerry, president of the International Federation of Robotics.

“Driven by the success story of smart production and automation, this is a worldwide increase of about 85 per cent within five years (2014-2019). The recent slowdown in sales by 12 per cent reflects the difficult times the two main customer industries, automotive and electrical/electronics, have experienced.

“In addition to that, the consequences from the coronavirus pandemic for the global economy cannot be fully assessed yet,” he continues.

“The remaining months of 2020 will be shaped by adaption to the ‘new normal.’ Robot suppliers adjust to the demand for new applications and developing solutions. A major stimulus from large-scale orders is unlikely this year. China might be an exception, because the coronavirus was first identified in the Chinese city of Wuhan in December 2019 and the country already started its recovery in the second quarter.

“Other economies report to be at the turning point right now. But it will take a few months until this translates into automation projects and robot demand. 2021 will see recovery, but it may take until 2022 or 2023 to reach the pre-crisis level.”

Americas, Asia and Europe: an overview

The USA is the largest industrial robot user in the Americas, reaching a new operational stock record of about 293.200 units – up seven per cent. Mexico comes second with 40,300 units, which is a plus of 11 per cent followed by Canada with about 28,600 units – plus two per cent.

New installations in the United States slowed down by 17 per cent in 2019 compared to the record year of 2018. Although, with 33,300 shipped units, sales remain on a very high level representing the second strongest result of all time. Most of the robots in the USA are imported from Japan and Europe.

Although, there are not many North American robot manufacturers, there are numerous important robot system integrators. Mexico ranks second in North America with almost 4,600 units – a slowdown of 20 per cent. Sales in Canada are one per cent up, to a new record of about 3,600 shipped units.

South America’s number one operational stock is in Brazil with almost 15,300 units – plus eight per cent. Sales slowed down by 17 per cent with about 1,800 installations – still one of the best results ever – only beaten by record shipments in 2018.

Asia remains the strongest market for industrial robots – operational stock for the region’s largest adopter China rose by 21 per cent and reached about 783,000 units in 2019. Japan ranks second with about 355,000 units – plus 12 per cent.

A runner-up is India with a new record of about 26,300 units – plus 15 per cent. Within five years, India has doubled the number of industrial robots operating in the country’s factories.

The share of newly installed robots in Asia was about two-thirds of global supply.

In China, the broad majority of 71 per cent of new robots was shipped in from foreign suppliers.

Chinese manufacturers still mainly cater to the domestic market, where they gain increasing market shares. Foreign suppliers deliver some 29 per cent of their units to the automotive industry, while it is only around 12 per cent for Chinese suppliers.

Therefore, foreign suppliers are more affected by the decline of business in the Chinese automotive industry than the domestic suppliers.

Robot sales show a differentiated picture for the largest markets within the European Union: About 20,500 robots were installed in Germany.

Robotics in the United Kingdom remains on a low level – new installations slowed down by 16 per cent.

The adoption of human-robot collaboration is on the rise. Cobot installations grew by 11 per cent.

This dynamic sales performance was in contrast to the overall trend with traditional industrial robots in 2019. As more and more suppliers offer collaborative robots and the range of applications becomes bigger, the market share reached 4.8 per cent of the total of 373,000 industrial robots installed in 2019. Although this market is growing rapidly, it is still in its infancy.

Globally, COVID-19 has a strong impact on 2020, but it also offers a chance for modernization and digitalization of production on the way to recovery.

In the long run, the benefits of increasing robot installations remain the same: Rapid production and delivery of customized products at competitive prices are the main incentives.

Automation enables manufacturers to keep production in developed economies – or reshore it – without sacrificing cost efficiency.

The range of industrial robots continues to expand – from traditional caged robots capable of handling all payloads quickly and precisely to new collaborative robots that work safely alongside humans, fully integrated into workbenches.