Collaborative robots are one solution to the country's crisis in manufacturing 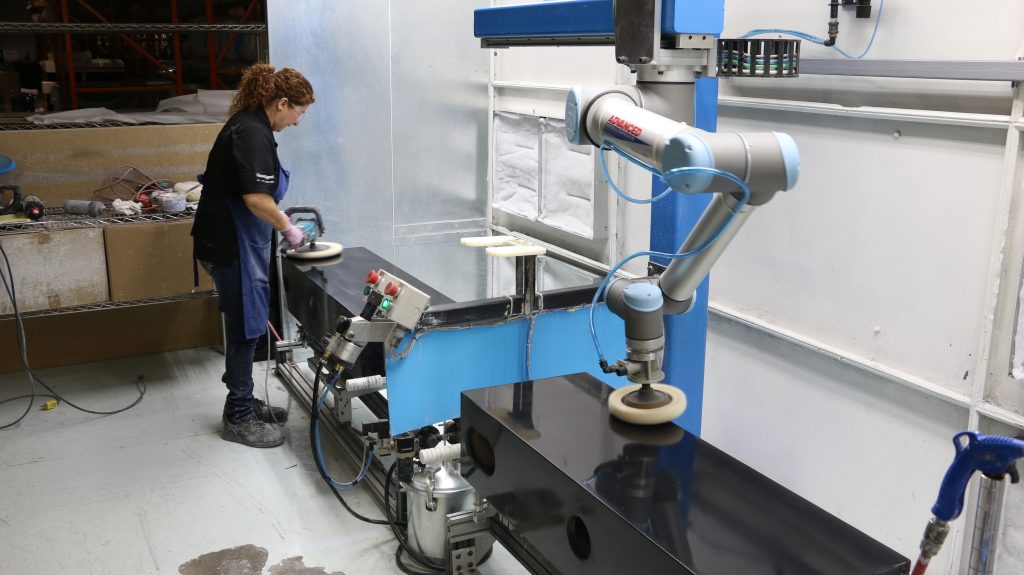 The contemporary world of business and production is witnessing a fourth Industrial Revolution, defined by advancing the union of human, computer, and machine technologies.

As businesses and manufacturers enter this new environment, new challenges in the workplace develop. As global economic productivity crawls, Canada faces challenges from this slowdown as well as from a constrained labour force.

Business Development Bank of Canada (BDC), in their recent report “Labour Shortage: Here to Stay,” warns that though Canada’s GDP is expected to outpace global growth this year and next, its workforce growth is continuing to slow toward 0.2 per cent growth for the entire next decade.

Slowing growth is not new for Canadian manufacturers. According to The Canadian Encyclopedia, Canada’s government-funded encyclopedia project, the 20th century saw the country’s share of the world’s manufactured goods rise from 4.5 per cent at the start of the century to six per cent during World War II, only to fall back to 4.5 per cent again at the start of the 21st century. Then between 2004 and 2011, jobs at textile mills, historically Canada’s largest manufacturing employer, dropped by 60 per cent.

Today, 40 per cent of small- to medium-sized enterprises (SMEs) in Canada are struggling to find workers, and this grand vacancy is strongly impacting these firms’ ability to grow. BDC calculates that firms encountering work shortages are 65 per cent more likely to be low-growth in their survey.

All these problems coagulate around the manufacturing industry, which has the most difficulty filling job vacancies in all of Canada. Fifty-six percent of manufacturers report they are struggling to hire, which is 17 per cent ahead of the national perception of hiring difficulty for any industry, says BDC. Regional employment data affirms this. The Canadian Encyclopedia reports that manufacturing is centred in central/Eastern Canada – Ontario creates around 46 per cent of the country’s total manufacturing sales, and Quebec contributes roughly 24 per cent.

While comprising over half of Canada’s total population, these two regions demonstrate a labour demand that is outpacing supply. Quebec and Ontario’s job vacancy rate is lockstep with global averages for the last six years, and their unemployment rates follow Canada’s average closely for the same period, according to Statistics Canada data.

However, the ratio of unemployment-to-job-vacancies has more aggressively declined in Ontario and Quebec over this interval than in the rest of Canada, which reveals that these populous regions, entrenched in the nation’s manufacturing, cannot reach for a labour solution among their own communities because they are fully occupied.

With a retiring population of baby boomers who used to dominate manufacturing employment, Canada cannot remain competitive by trying to fill more labour into the same modes of production. Deloitte’s most recent economic outlook survey for Canada predicts that “global competition will intensify as companies vie for their share of a slower-growing income pie,” and Canada’s ability to survive and compete through a global slowdown and a fourth Industrial Revolution will depend on its ability to make bold changes to its technology and workers.

Large-scale automation is cost-prohibitive for SMEs

In BDC’s Labour Shortage survey, 56 per cent of SMEs say their staff must work more, 47 per cent are trying to raise wages to retain their current workforce, and 43 per cent are resigned to the acceptance that growth is limited. The Canadian Encyclopedia notes that “competition has been increasingly based on cost of production per unit, placing downward pressure on wages and other costs,” and these labour-side strategies are negatively impacting the bottom line for Canadian manufacturers, knackering their competitiveness on the global stage.

Deloitte’s Economic Outlook recommends to Canada that facing “tight labour markets should motivate investments in capital and technology.” Though Canadian businesses are most likely to seek improvements in their processes’ efficiency (44 per cent of businesses are doing this, according to Business Development Bank of Canada), only 26 per cent are pursuing investments in traditional automation to accomplish this.

The prohibitively high cost of industrial robots, the skilled staff required to set up and run them, and the huge changes to factory layout and safety protocols that they require, limit their accessibility for any but the largest firms in manufacturing. BDC explains how SMEs are priced out of this choice: “large investments are often required to automate production and these, in turn, depend on economies of scale to pay off.”

Despite these alarms and costly solutions, Canadian manufacturers are still trying to fill vacancies and hire young workers. BDC’s survey summarizes that Canada’s top hiring strategy among employers is to hire less qualified workers (43 per cent), regardless of concerns that “the additional time and effort required to train junior employees keep senior staff away from higher-value tasks, such as developing client relations or new projects.” This is another tech-less solution to the work shortage that keeps the costs high and the value of productive workers low.

However, adopting the lens of Industry 4.0 invites new questions from these more-of-the same solutions of workers and traditional automation. What skills and tasks are hard to hire for, and waste time and effort to train? What skills would become in demand in the context of newly employed technologies? Would these newly demanded skills be in as short supply?

The uniting reason these two “more of the same” approaches will fail to ease conditions for workers and company owners is because they both focus narrowly on the labour and skills gap as problems, rather than as growing pains simultaneous with the Fourth Industrial Revolution and its opportunities.

Deloitte shares in its “2019 Global Human Capital Trends” report that organizations of all sizes believe it is urgent to reinvent work and work architecture to meet the challenges of Industry 4.0. Researchers assert “there are two aspects of the reinvention that must remain constant: (1) it must involve technology in some way – there is no path to reinvention without it and (2) it must be a bold enough change to meet the challenges that the social enterprise presents.”

Computerization may have defined the last revolution, but what distinguishes the technologies of Industry 4.0 is that they blur the line between human, computer and machine work. Collaborative robots (cobots) are a solution defined by this contemporary environment. The perfect illustration of modern manufacturing, cobots combine the physical abilities and digital control systems of a robot with the size, flexibility, and power necessary to safely and effectively collaborate with people.

First and foremost, cobots are designed to work right next to people without a safety fence in between. Thanks to their unique design, most cobots do not require safety cages or disruptive redesigns of the plant floor. Many designs can be deployed 50 per cent faster than industrial robots and often impose an installation cost lower than the annual new employee wage.

Unlike traditional robots that require engineer-level programming, cobots are designed to make programming simple through human-machine interfaces (HMI) familiar to anyone who has used a smartphone. 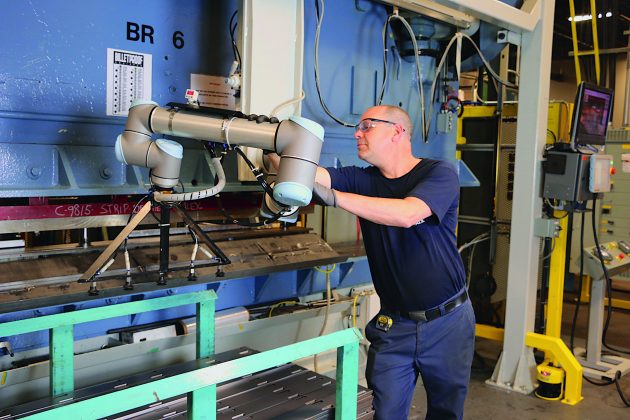 Etalex, a Quebec-based manufacturer of shelving systems, has installed a UR10 collaborative robot from Universal Robots to pick metal parts out of a press brake. Photo: Universal Robots

With advances in artificial intelligence algorithms, cobots are also capable of learning on the job. Often, a worker can reprogram a cobot simply by putting its arm through the desired motions; the cobot remembers the instruction and repeats it independently, without the need for new code. By eliminating the need for a formal education in programming or robotics, such interfaces and capabilities lessen the skills gap and learning curve for using cobots.

In Accenture’s “Manufacturing the Future” report, researchers note that with the rise of AI, “the manufacturing workforce will need to be re-skilled to work alongside them.” Cobots ask little of their human collaborators to produce synergistic results, which also greatly reduces the time, effort and cost associated with re-tasking a cobot for temporary tasks or burst production during busy seasons.

Forty-seven percent of Canadian execs expect to invest in technology to improve their operations, which is nearly 10 per cent ahead of the global expectation of new tech, according to Deloitte. In the absence of considerable customization of industrial robot work cells, cobots can provide a fast return on investment.

By speeding deployment with minimal disruption to a factory layout and by enabling minimally trained workers to safely program and use the technology to increase productivity and improve quality, cobots’ payback is often measured in weeks or months (See Universal Robots’ case study library for more details.)

Manufacturers need to meet their expectation of new robot systems with the task of balancing cost and value in their operations. Cobots’ fast ROI is not just a function of cobot technology’s lower capital cost versus industrial robots. It is enabled by cobot’s ability to multiply the value of an enterprise’s human assets, freeing workers to tackle higher productivity processes and acquire new skills for a modern manufacturing age.

Solving a crisis of labour requires a reinvention of work and the workplace that uses bold changes in technology. Deloitte’s Economic Outlook on Canada reminds that “slower economic growth can be a powerful catalyst for business and governments to implement reforms and boost competitiveness.”

In addition to cutting costs and streamlining production, leveraging Industry 4.0 technologies has the opportunity to improve the experience of manufacturing work, boost global competitiveness and enhance value for customers. The human-machine pairing that cobots enables is the critical step toward delivering these values.