Robots as a service: why more companies are taking the plunge, what’s available in Canada and what’s ahead 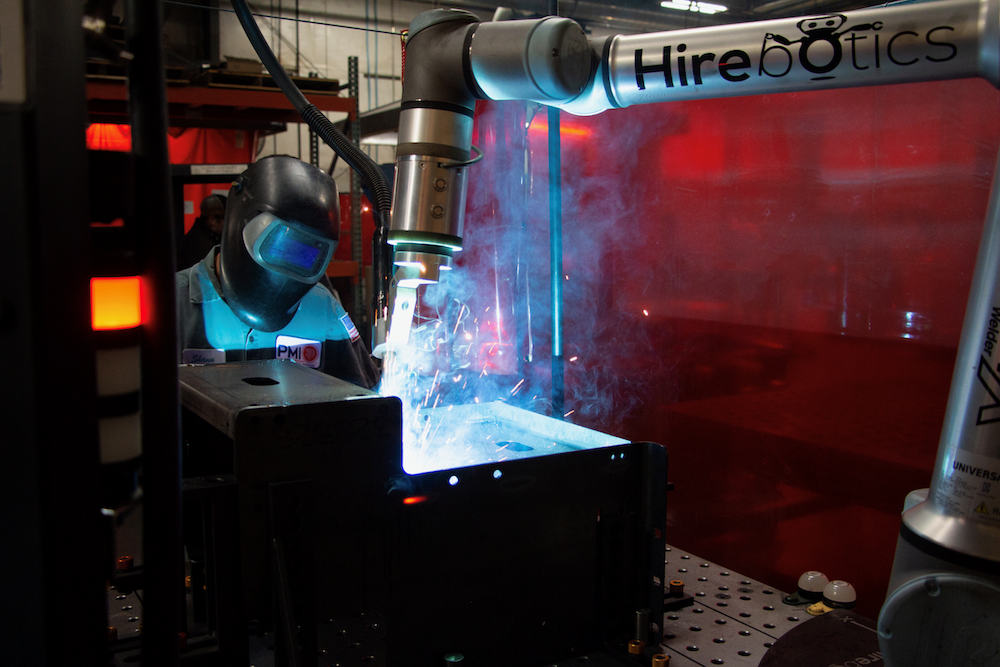 COVID-19 has brought many issues to the forefront for Canadian manufacturers, among them an unstable labour situation and the unforeseen costs of distancing, disinfection and other new safety protocols.

Addressing the labour issue, which was already a widespread industry stressor, with technology is a good idea – but the pandemic has made cash scarce for many firms right now.

However, the current desire to reap the benefits of automation is strong. Honeywell’s 2020 Intelligrated Automation Investment Study, for example, found that over 50 per cent of U.S. companies are increasingly open to investing in automation to survive changing market conditions brought about by the pandemic.

So, what’s really needed is a very low-cost, low-risk automation option – and that’s exactly why the “robots as a service” (RaaS) concept is gaining traction.

While it’s been around for more than 15 years, it was identified as an “emerging trend to watch” by industry pundits a couple of years ago. And last year – before the pandemic – global consulting firm ABI Research predicted that there will be 1.3 million RaaS deployments globally by 2026.

“RaaS can help during periods where employees can’t be at work or there’s a spike in demand,” says Yarek Niedbala, vice president of sales at KUKA Robotics Canada.

“[RaaS] contracts can be negotiated to allow companies to terminate the agreement when employees are able to return to work or when demand drops.” He adds that with robotics in place, there are fewer operators on the plant floor, which means a lower likelihood of spreading COVID-19.

Last year – before the pandemic – global consulting firm ABI Research predicted that there will be 1.3 million RaaS deployments globally by 2026.

So, eyes are turning to RaaS, but how does it differ from robot rental, a service that has been around for quite a while?

Hirebotics co-founder Rob Goldiez first stresses that slapping the term RaaS onto a rental offering doesn’t make it so.

RaaS is a system, he explains, that’s comparable to SaaS (software as a service), which “transformed the software industry not just because it was a different way to buy, but also because it allowed companies to quickly scale up or down without the traditionally long implementation cycles of the past.”

That is, compared to a locked-in robot rental contract situation, RaaS is generally pay-as-you-go and highly flexible. A customer that has a particular RaaS unit this week can get a different one next week, or a bigger one, or another one of the same, or return it – depending on changing circumstances.

In addition, at the “service” end of RaaS is the capability to have the robot connected to the cloud, using machine learning to collaborate with other robots and much more. Amazon, Google and Honda are among the companies exploring this, and indeed already offering it.

RaaS can be used in warehouses for item picking, security, cleaning, disinfection and more. In manufacturing, Hirebotics is currently focused on using RaaS for MIG welding.

“The shortage of skilled workers is a massive problem in the industry that is only getting worse,” Goldiez explains. “Our BotX [collaborative robot] offering allows companies to – in a matter of hours – have their staff trained and running production. It takes longer to create a new job posting.”

Goldiez notes that there are a lot of things cobots can already do, and that future cobot RaaS applications will likely be in areas “closest to the core of the three Ds – dull, dirty and dangerous – where it’s hard to find people and where human mistakes can lead to quality issues,” he says. “Applications like gluing, grinding and finishing.”

Quebec-based Waybo currently offers robot cells as a service, which can interface with other equipment such as grinding wheels, marking machines, digital inspection machines and saws.

For its part, ForwardX Robotics aims to offer its RaaS offerings to North American manufacturers for many types of handling applications (its RaaS products are already in place in China).

“Furthermore, with intelligent solutions like AMRs, manufacturers can easily adjust workflows and re-route robots to fit their needs,” he says, further cutting costs and increasing productivity.

As is common with many other forms of automation, it can be difficult with RaaS to nail down the metrics to measure parameters for success. Goldiez adds (and this can be the case with many types of automation) that RaaS can also trigger a fear of failure in plant managers.

“Too many people have heard horror stories about businesses that purchased automation and struggled to get it working,” he says.

“Or, they purchased automation that wasn’t flexible and the benefits are only partially realized. There’s also a fear that employees won’t embrace it out of fear of losing their jobs.”

With RaaS in particular, specific applications will require customization of the robotic hardware, which of course requires time and comes with costs. And with any robotic system, it may also be challenging to successfully achieve high levels of quality and consistency in certain applications.

A customer that has a particular RaaS unit this week can get a different one next week, or a bigger one, or another one of the same, or return it – depending on changing circumstances.

For example, grinding and polishing “where the robot […] needs to ‘feel’ the amount of force that it’s exerting,” says Niedbala. In addition, he explains that some applications require a proof of concept, testing various tools to determine which one works and so on. High-speed applications in particular require lots of optimization.

Niedbala adds that whether a robot is purchased, rented or under a RaaS arrangement, it’s only a part of the robotic cell, which must be designed appropriately for its intended task and requires tooling, fixturing, feeding mechanisms, programming and so on.

Indeed, he says sometimes the design and engineering of such a cell can take so long that it makes the RaaS model impractical.

Despite the challenges and select current applications available with RaaS, it’s likely that with labour shortages and constant improvements in capability, adoption of the concept will grow.

It’s one of many robotic options now available, and along with the autonomous mobile robots, cobots and more, “today, the customer is spoiled for choice,” notes ARC Advisory Group. Of course, more choices are coming soon. For example, KUKA is about to launch SmartFactory as a Service – the rental of an entire plant run by robots.

This article originally appeared in the October 2020 issue of Manufacturing AUTOMATION.