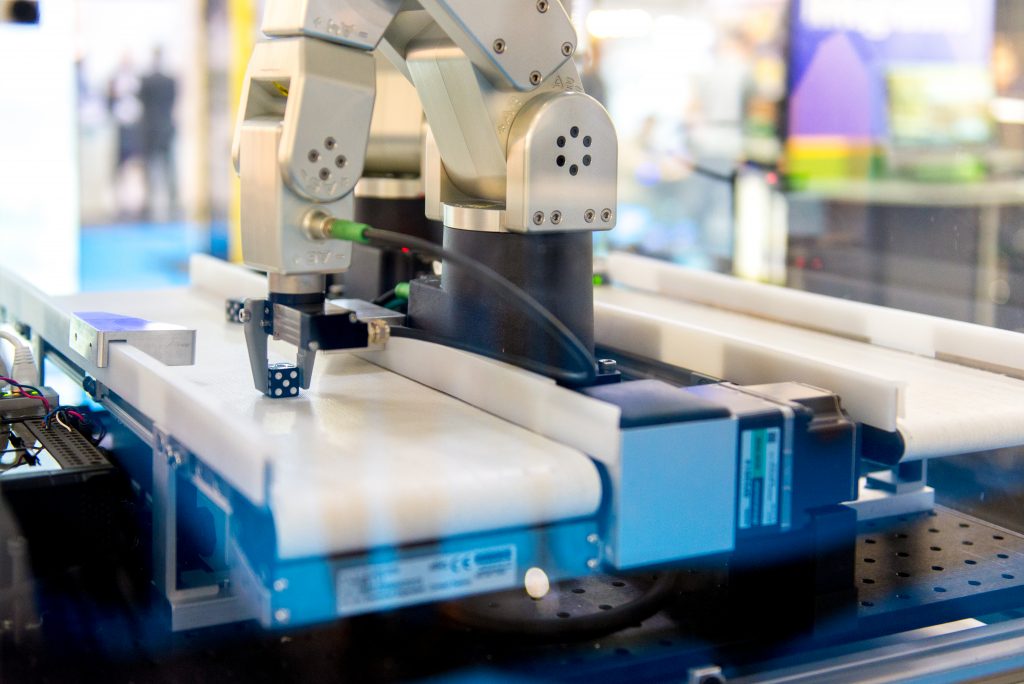 Six years ago, when Jonathan Coulombe, an electrical engineering grad at Montreal’s École de technologie supérieure (ÉTS), and Ilian Bonev, Coulombe’s then-research supervisor and professor in the school’s department of automated manufacturing, founded their robotics company Mecademic, the idea of going up against industrial giants such as ABB and FANUC wasn’t on the table.

In 2014, Mecademic debuted a now-discontinued small dual-arm SCARA robot named DexTAR, designed for educational purposes. But it turned out that DexTAR appealed more to manufacturers, who would ask if the diminutive robot could be adapted for pick-and-place applications in industry.

“We had to address industry – this is something that Jonathan was willing to do since the very beginning, but I wasn’t sure we could compete with all those big guys,” says Bonev, who is also head of the ÉTS control and robotics laboratory and the Canada Research Chair in precision robotics. “Eventually I realized we have the expertise required to make these small robots.” 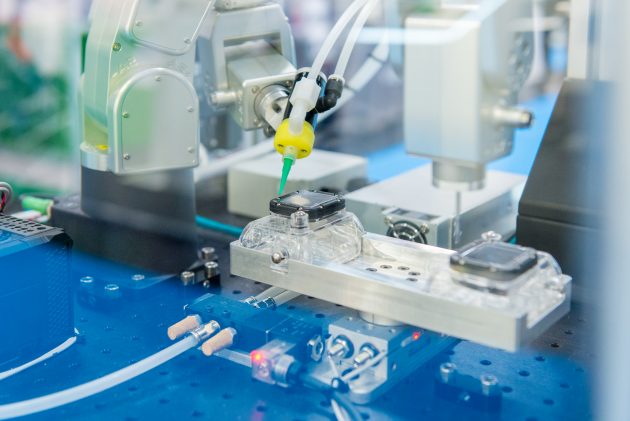 So the pair developed a six-axis industrial robot called the Meca500, which has a payload of 500 grams and a reach of 260 millimetres at its wrist centre. Its entire arm when fully extended is about 330 millimetres. The controller is embedded in the robot’s base, and the complete robot weighs only 4.5 kilograms. It’s a tidy setup that allows the Meca500 to be mounted in tight spaces for testing, quality inspection, precision assembly, dispensing and machine tending across manufacturing industries including electronics, medical devices, automotive, aerospace and watchmaking.

When Mecademic uploaded a demo video to YouTube in May 2015, the positive feedback was swift. And loud – that particular clip has since been viewed nearly half a million times. “Everyone who types ‘small robot’ sees our robot,” says Bonev. “This is something that helped us be known worldwide – otherwise it would have been impossible for a small company to get access to a market like this.”

A study in precision

Mecademic’s 20 staff members pride themselves on the fact that they manufacture nearly everything for the Meca500 robots out of a single 10,000-square-foot production and assembly facility near downtown Montreal.

The team purchases some of the main components, such as the processors. But they manufacture several items themselves, including the aluminum housing, as well as the drives for the Maxon motors (Maxon’s drives are too big for such a small application). Mecademic also executes all the coding for the robot controllers in house, without the help of a library.

Zero-backlash gearboxes from Harmonic Drive give the Meca500 its laser-like precision, with repeatability of five micrometres (μm). “If you open another robot, you will see a lot of empty space and big electronic components. In our case, everything is extremely compact,” says Bonev. “The bigger [robot] you get, the more small errors you get in the joints. This is why we are much more precise.”

To achieve the Meca500’s extremely high accuracy rate, Mecademic uses a coordinate-measuring machine (CMM) to inspect the robots and identify errors, instead of the metrology equipment commonly used by industrial robot manufacturers, such as laser trackers. This satisfies the needs of the company’s clients who use the Meca500 for inspection. “If you want to inspect something like a cell phone, for example, or a camera, you want to move it with relatively high accuracy,” says Bonev. 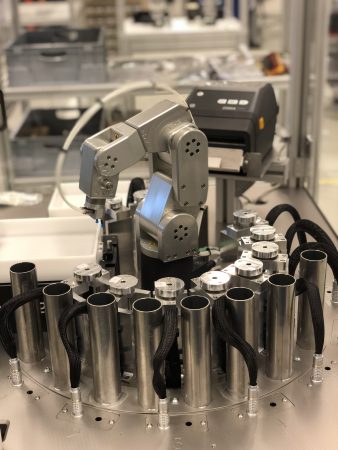 Big control on a small scale

With everything contained in the base of the Meca500, there are no desktop controller boxes or thick cables to contend with. Once plugged in with an Ethernet cable, the robot can be programmed directly from a web-based interface accessible on any computer.

“Our philosophy is really that robotics is a component. It is a complement [to your existing operations],” Bonev says. “We thought, why replicate a PLC inside the robot like other robot manufacturers? Why don’t we just strip it from everything unnecessary and just focus on the robotics part?”

Once plugged in with an Ethernet cable, the robot can be programmed directly from a web-based interface accessible on any computer.

Operators can use the programming language of their choice to transmit commands to the robot via the TCP/IP protocol or EtherCAT. Those who need to adjust inputs and outputs such as sensors and actuators can use their own programmable logic controller (PLC) instead of the web software.

Building a case in Canada

Since acquiring a CNC machining centre and releasing the Meca500 to the public in July 2016, Mecademic has sold over 500 of the robot arms, mostly to clients in the US and Europe. LNA Laser Technology, a Rhode Island–based producer of fibre-laser welding and cutting systems, uses a Meca500 robot fitted with custom end effectors for machine tending.

The Canadian market has been a bit tougher for the company to crack. “In the States, [manufacturers] are really ready to take the risk even if it is a small company and even if it’s something new,” says Bonev. “Many clients just bought the robot without ever seeing it. In Canada, people need to be more convinced and have case studies and demos.”

As a result, Mecademic plans to hire a salesperson responsible for Quebec and possibly Ontario to work on bringing the product to decision makers, who Bonev says may be the sticklers when it comes to implementing automation – not engineers. “Engineers are not afraid of robotics. It’s probably the management,” he says. “They see it as more risky, even though it’s been 50 years or more that robotics have existed. But there are so many case studies now.”

“In the States, [manufacturers] are really ready to take the risk even if it is a small company and even if it’s something new. Many clients just bought the robot without ever seeing it. In Canada, people need to be more convinced.”

Case in point: one Mecademic client received a large order and needed to manufacture more parts. Using the Meca500 robot arm in the manufacturing process allowed the client to replace the work of four operators who would perform a specific task very slowly and with a lot of errors. The operators themselves have not been replaced – they’ve just been reassigned to other tasks in production and quality control that are not easily automated. The client tells the company its return on investment was six months.

“A human, even without any training, is extremely dexterous and has vision. We can do stuff that is extremely difficult to automate,” says Bonev. “But a human operator can never do inspection. A human operator can never place a cell phone exactly one millimetre apart. So the question is not, do we continue to do this with humans or do we invest in robotics. The question is, do we do this with fixed automation, or do we just buy a six-axis robot?”

Mecademic is building on its small-robot success by going back to its beginnings – the company is introducing a miniature industrial SCARA robot later this year that can be mounted either horizontally or on the ceiling. Like the Meca500, the SCARA robot will also feature a streamlined design with an embedded controller, but, with its ultra-fast speed, will be better optimized for small-scale pick-and-place applications, such as in electronics assembly and medical device manufacturing.

Bonev says that as a professor, it’s important for him to educate manufacturers on how to optimize their robotic applications.

“Even if robots one day are much more intelligent, you still have to know how to use this intelligence. You will still need to optimize a robot cell – and this is probably one of the reasons why in Canada we still have difficulty implementing robots. It’s that there is a need for education on how to implement robots the right way,” he says.

“Implementing robots is not so easy. You don’t just screw it in there and then teach it. You have to design the robotics cell. It has to be safe; it has to be optimized. And there is no textbook about this. There’s no course. You don’t learn this in university; you learn this by yourself. This is something that we want to educate people on.”

This article originally appeared in the Fall 2019 edition of Robotics Insider, a quarterly e-book produced by Manufacturing AUTOMATION.