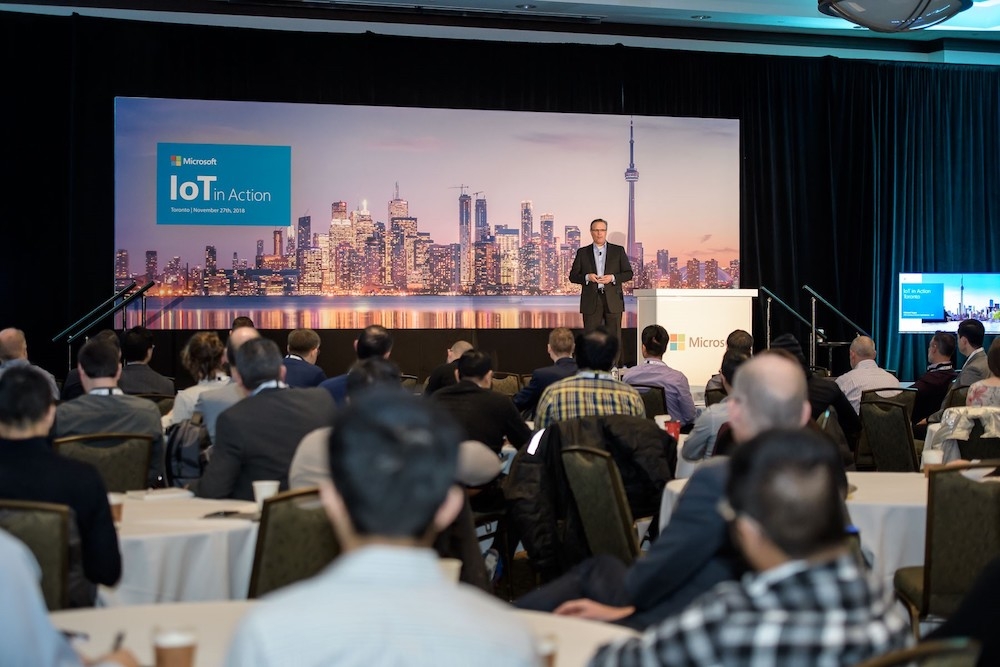 November 29, 2018 – Microsoft has made several additions to its industry-agnostic Azure IoT suite that it says well help companies approach the Internet of Things (IoT) more holistically, including a dashboard for security deployment, security protection for connected microcontroller devices, and a platform to create virtual models of physical environments.

Microsoft highlighted the new developments ­– which are part of the company’s overall $5-billion investment in IoT announced earlier this year – at the IoT in Action event in Toronto on November 27. About 1,000 attendees gathered at The International Centre to hear about the future of IoT, see product demonstrations and case studies, and to meet solutions providers (Microsoft is working with about two dozen other companies in its “partner ecosystem” to deliver complete IoT solutions to consumers).

Getting a handle on the IoT

At the IoT in Action event, attendees heard from several Microsoft executives, including Michael Kuptz, general manager for Microsoft America device experiences for IoT. Kuptz notes that manufacturers looking to adopt the IoT in their plants have many valid questions at the outset, such as: “Who is analyzing the data? Who is processing the data? Who owns the data? What are the regulatory requirements for the data?” Return on investment is another major concern. “The ROI conversations are universal. How much time? How much money? How many resources? What is the ROI?”

And the IoT won’t work for your company if it’s limited to one or two ad-hoc devices gathering data, says Kuptz. “It’s one thing to be able to connect things. It’s another to gain insights. But at the end of the day, it’s about scale.” The key to scaling an IoT solution within a plant or across multiple plants lies in artificial intelligence, which is used to action on the data collected by devices in the IoT.

Tony Shakib, general manager of Azure IoT for Microsoft, adds, “The IoT has always been about connecting things at scale – but we ended up getting massive amounts of data coming in and people didn’t know what to do with it. With AI – with an unlimited amount of compute available in the cloud – you can really start making sense of that data to do some amazing things.”

Ideally, a “digital feedback loop” needs to connect devices, products and customers together, in an endless cycle of iterative learning. A lot of companies are unable to achieve that loop because they aren’t fully digitized. “Companies think they are in the IoT, but if only one of their 20 to 30 factories has IoT, it hasn’t been scaled,” Shakib says. “Data is siloed across different parts of the company.”

To help companies understand how to make the most of that data, Microsoft has identified three steps to successful IoT implementation:

Shakib estimates that 70 to 80 per cent of companies that have adopted IoT are still in stage one. “But Transform & Expand is where the real magic happens,” he says.

Once companies are armed with useful data, they can do things like reallocate resources. For example, Shakib says, “If I’m a warehouse operator expecting a shipment of parts that haven’t yet arrived – if I know there is weather, or that the parts got stuck at customs, I can take that information and not have workers go there and wait. That’s what brings value to the organization.”

Among the announcements at the event of interest to manufacturers was the new Azure Digital Twins service, which allows users to call on data in the context of a physical environment (rather than from disparate sensors) to create a virtual representation of the physical world – whether infrastructure, buildings or work cells – through a spatial intelligence graph and twin object models.

Azure Sphere, also new, provides security for connected microcontroller (MCU) devices that are analyzing data locally at the edge. A new set of MCUs includes Microsoft silicon security technology, and they are paired with a secure OS. The Azure Sphere security service works in tandem in the cloud, detecting threats and ensuring certificate-based authentication.

Microsoft also highlighted expanded capability for its Azure Security Center, which now connects to IoT-enabled devices to identify security gaps and provide priority-sequence recommendations on how to fix them. The dashboard will also send alerts when it detects threats or suspicious activity so operators can respond in real time.

“The IoT is complex,” says Shakib. “There’s no silver bullet, no single application. There are a lot of different killer apps.

“We’re trying to give you all the tools that you need – and not just for 40 devices. Because at some point, your organization is going to get to 40,000 devices.”