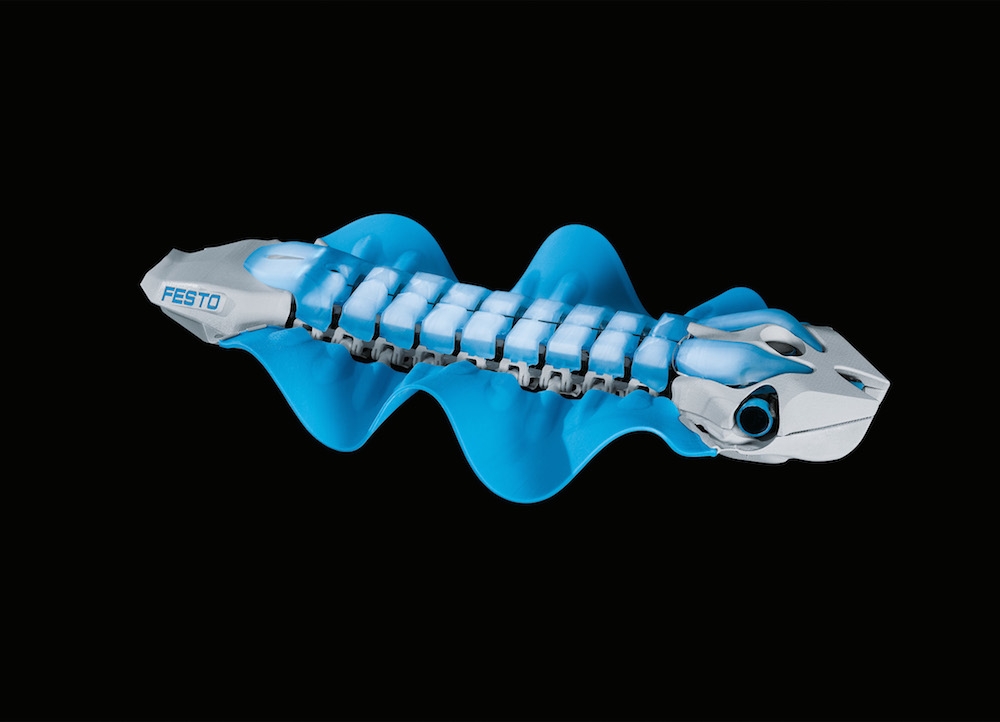 The fin drive concept is particularly suitable for slow, precise motion and causes less turbulence in the water than, say, a conventional screw propulsion drive, explains Festo. For its public debut this month at ACHEMA, the global process trade show, the robot manoeuvred itself autonomously through a system of acrylic glass tubing.

Like Festo’s other bionic animals, this imitation of nature’s own drive system represents a new technology that can be perfected and adapted to create autonomous robots for use in process sectors, including water and wastewater treatment plants. Robots based on the BionicFinWave could be developed for tasks such as inspection, taking measurements or data acquisition. The knowledge gained from this project could also be used for developing new methods in the manufacturing of soft robotics components.

The longitudinal fins of the cuttlefish or polyclad marine flatworm families extend from head to tail: along their backs, their undersides or along the sides of their torsos. To move through the water, the animals use their fins to generate a continuous wave that progresses along the entire length of their bodies. This so-called undulation forces the water backwards, thereby producing a forward thrust. The BionicFinWave uses this principle to manoeuvre itself forwards or backwards. The autonomous underwater robot can communicate with operators via radio and transmit data, such as temperature and pressure sensor readings, to a tablet.

Festo explains the two lateral fins of the 370-mm long BionicFinWave are moulded entirely from silicone and dispense with reinforcement struts and other supporting elements. It describes them as extremely flexible and able to realistically emulate the gently flowing movements of their biological model. To carry out the movement, each of the two fins is attached to nine small lever arms with a deflection angle of 45 degrees; these are driven by two servo motors housed within the body of the underwater robot. Two flat crankshafts transmit force to the arms, so that the two fins can move independently of each other; thus, they can simultaneously generate different wave patterns. To swim in a curve, for example, the outer fin moves faster than the inner one – much like the treads of an excavator. The BionicFinWave moves upwards or downwards by bending its body in the desired direction. To make the crankshafts suitably flexible, universal joints are located between the lever segments. The crankshafts, together with the joints and piston rod, are made as an integral unit from plastic using a 3D printing process.

Besides the BionicFinWave, Festo’s other underwater bionic animals include Aquajellies 2.0, which can act in a coordinated, collective fashion, much like jellyfish, to perform a range of real-time diagnostics in a limited space.