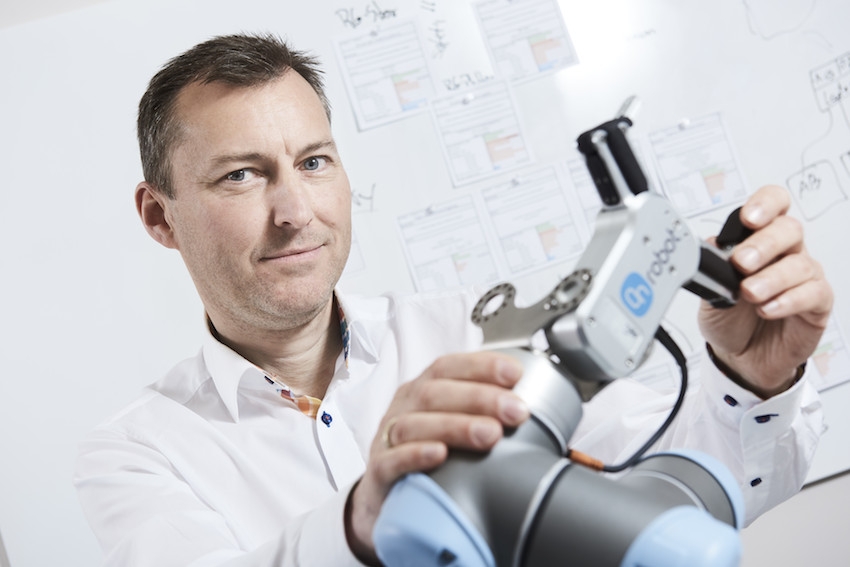 Mar. 20, 2017 – A Danish manufacturer of grippers for collaborative robots (cobots) plans to enter the North American market at next month’s Automate tradeshow.

Based in Odense, Denmark, On Robot has sold its customizable cobot grippers in more than 40 countries since its founding in 2014, and says it intends to bring its “more user-friendly, safe and flexible” grippers to North American manufacturers.

Its flagship product, the two-finger RG2 gripper — available in both single and dual versions — mounts on the arms of cobots without any external wires. The company explains that for robots that have infinite rotation of the last joint, this enables “unprecedented flexibility and productivity.” According to On Robot, the RG2 gripper can be programmed directly from the same interface as the robot, and it can be modified without previous programming experience, “making them ideal for collaborative robot users.”

“User-friendly robot arms need user-friendly grippers, and until RG2, the ease-of-use and flexibility required just wasn’t available,” said Torben Ekvall, CEO. “On Robot’s RG2 is an electronic solution that is easy to mount, is very flexible and can be modified by an operator on the factory floor without the assistance of an engineer. This ease-of-use will help speed development for an increasing number of manufacturers’ applications.”

On Robot has appointed high-tech distributor Gary Eliasson as its general manager for North America.

“The demand for easy-to-use and -program cobots in North America is growing dramatically,” said Eliasson. “But the missing link of the entire collaborative development has been grippers that are as flexible and dexterous as the arm itself. RG2 is that missing link. I’m looking forward to filling the demand with a robust distribution network throughout North America to help manufacturers automate their processes as easily and cost-effectively as possible.”
” frameborder=”0″ allowfullscreen>