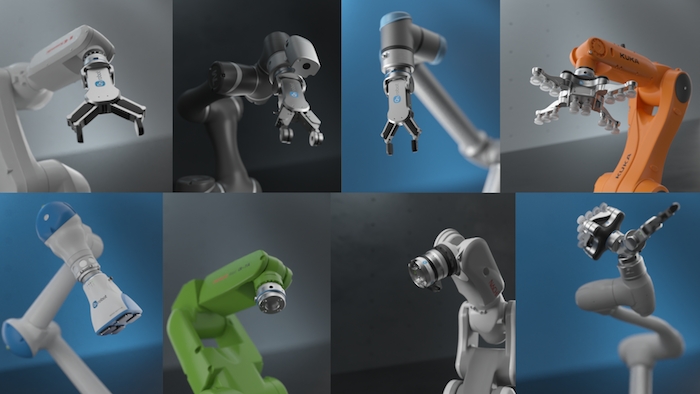 Building on that initiative, all OnRobot products now have a unified mechanical and communications interface based on the OnRobot Quick Changer, which is now an integrated part of all OnRobot products. An additional Dual Quick Changer incorporates these same new capabilities while allowing the use of two tools in one cycle, mixing and matching to suit application needs and maximizing robot use.

With the OnRobot Quick Changer, a single cable provides a universal interface for tools and communications, so there is no need to disconnect cables when changing tools, and extended communications options support a full range of robotic platforms.

Remy Glaisner, research director for intelligent operational systems and robotics at IDC, says he welcomes the one-system solution. “The benefits of robotics across the industrial operating environment is routinely hindered because of systems’ limited versatility,” he says in a release. “Actuation capabilities are therefore critical to the applicability of solutions across a variety of manufacturing use-cases. An adaptable end-effector solution translates into accrued technology adoption, enabling a new level of nimble operational effectiveness.”

For Universal Robots robot arms, OnRobot now provides a unified URCap that allows all tools to work together, even in a single program. For example, using the new Dual Quick Changer, manufacturers can use an RG2 two-finger gripper together with a VG10 vacuum gripper in one cycle, achieving greater use of a single UR robot.

All OnRobot products now have a unified communication platform using standard fieldbus protocols to program the tools, regardless of robot used. With the new fieldbus protocols, manufacturers can easily set software values and use more functions via a standard Ethernet cable, supporting an increased level of sophistication with a plug-and-produce approach that doesn’t require additional cables. Deployment time can be cut from three hours to 30 minutes, so manufacturers can get their collaborative application up and running quickly.

For robots that connect through digital I/O, the new OnRobot one-system solution includes a WebLogic interface. Using the IP address of the OnRobot Compute Box, manufacturers can sign in via the OnRobot WebClient from a phone or any other network-connected device to monitor the robot or create simple robot programs.

Manufacturers can preset values and create elaborate programming logic using the feedback values from OnRobot grippers and sensors to provide finer control. This makes OnRobot tools compatible with an even broader range of robot arms and helps manufacturers get their collaborative application up and running quickly.