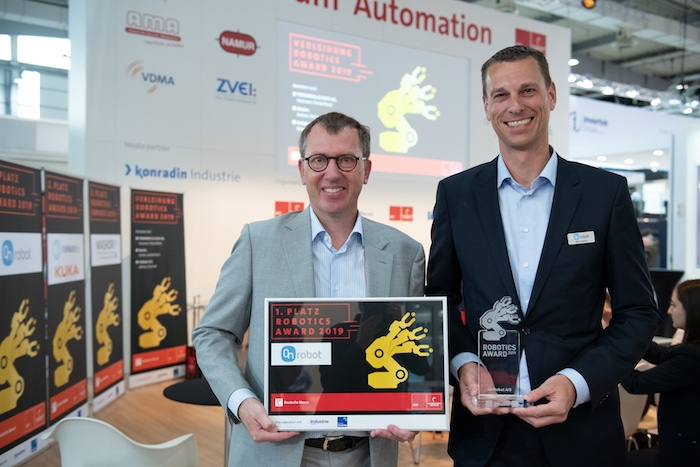 April 3, 2019 – OnRobot has won the 2019 Robotics Award at the Hannover Messe industrial technology trade fair for its Gecko Gripper system.

The gripper mimics the grip of a lizard and can hold objects without using additional energy.

On April 2, robotics experts and enthusiasts gathered for the ninth successive year at the fair’s Automation Forum in order to celebrate innovative technological solutions. The Finance Minister for the German State of Lower Saxony, Reinhold Hilbers, presented the award (which carries a total purse of EUR 10,000) on behalf of Bernd Althusmann, Lower Saxony’s minister of economic affairs, employment, transport and digitalization.

The Gecko Gripper is modelled on structures found in the feet of certain reptiles. Millions of microscopically fine hairs create so-called van der Waals forces when they contact smooth surfaces. This results in strong adhesion and anti-shearing force without the need to use any power for the purpose. The object is released simply by tilting the gripper surfaces.

In the run-up to the 2019 Robotics Award, numerous enterprises and institutions from Germany and abroad submitted innovative solutions in the fields of industrial automation, mobile robots and/or autonomous systems. Three made it through to the final round of judging at Hannover Messe.

The second prize was awarded to a joint project by forwardttc GmbH and KUKA AG. This project involves a low-cost charging assistant for electric vehicles (both private and commercial). The automatic charging process is initiated via a remote control or an app. In terms of the possible charging capacities, the charger is compatible with all electronic passenger vehicles, and the process can even be adapted for other innovative fuels such as hydrogen.

Third prize was awarded to MASKOR, the Institute for Mobile Autonomous Systems and Cognitive Robotics at the Aachen University of Applied Sciences, for its autonomous field robot (ETAROB) used in vegetable production.

The Robotics Award is given in partnership with the Robotation Academy and the Konradin Media Group.