Features Robotics
Play well with others 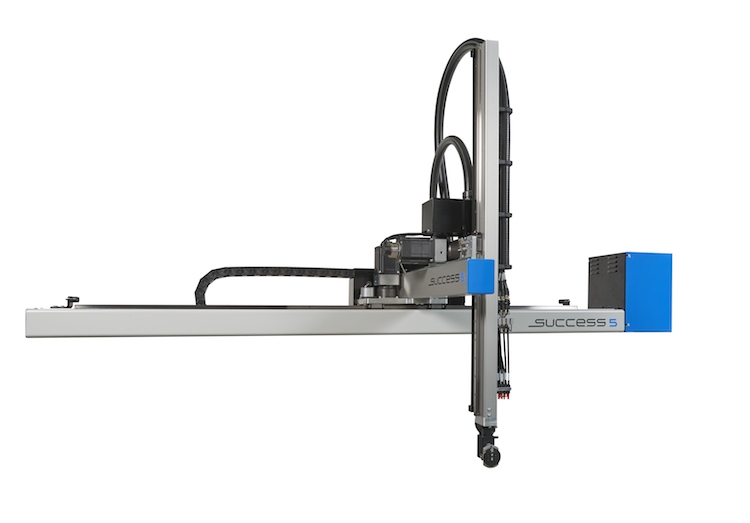 Nov. 4, 2017 – There’s a good reason why solitary confinement is considered the worst of all punishments: Generally speaking, people — and other intelligent organisms — suffer in isolation. So why shouldn’t the same be true of intelligent machinery?

Take industrial robots. The days of robots labouring on their own, separated from other production equipment, are becoming as dead as disco, as manufacturers discover the advantages of making them part of a system, an automated cell, or a networked plant. Some of the newest robotic technologies for plastics processing are cases in point.

Stacks of innovation
ABB Robotics recently made the SafeMove2 monitoring and control software available for its IRB 1200 six-axis industrial robot, making it the smallest ABB robot to feature the program. SafeMove2 is designed to enable people to work safely alongside ABB robots with payloads ranging from 6 to 800 kg without compromising productivity. It also provides an optimum level of collaboration and flexibility to higher speed and throughput applications which typically require more insular, intrusive levels of safety.

“SafeMove2 allows robots and operators to work more collaboratively and closer together by restricting robot motion to precisely what is needed for a specific application,” said Hui Zhang, head of product management at ABB Robotics. “Additionally, SafeMove2 simplifies production scenarios and provides tools that speed the commissioning workflow for faster set-up and validation.” The software option also integrates safety fieldbus connectivity into ABB’s IRC5 robot controller family, as well as the IRC5 Single, Compact, and Paint controllers. First introduced in 2014, the IRB 1200 comes in two variants for a wide range of applications: the 700 mm reach variant can handle payloads of up to 7 kg, and the longer reach 900 mm variant for payloads up to 5 kg.

New stacking robots from Italy’s Amut-Comi SpA are available in two models, each designed to be used with the company’s ACF line of thermoforming machines. The first, the ER2X, consists of a vertical axis to pick up and discharge formed parts and a horizontal axis to take the parts from the picking station to the stacking unit. The second, the ER3X, is furnished with a third axis that can rotate from 0° to 180°, allowing it to turn parts for A-B stacking or other purposes. The units are controlled by Amut-Comi’s Easy software, which is designed to harmonize the robot with the thermoforming machine. The robots operate at speeds of up to 40 cycles per minute. “A specific page has been added to the machine control panel to give operators flexibility in setting all the cycle parameters of the robot,” the company said. According to Amut-Comi, the interface is user-friendly and intuitive.

Engel Austria recently expanded its robot line. One new entry is an addition to the Easix line, which currently consists of six-axis articulated-arm robots; while for pick-and-place, stacking, and palletizing applications, a new four-axis SCARA version offers much higher speed at lower cost. Based on Staubli technology, the SCARA robots can be fully integrated into the CC300 injection machine controller, Engel said. The second entry is a new servo sprue picker based on the technology of the E-pic pick-and-place model introduced at Fakuma 2014 and shown at NPE2015, but with one fewer axis. “For maximum speed, compactness, and energy efficiency, the new picker combines a linear vertical axis with a vertical swivel arm,” Engel said. “Unlike the earlier E-pic, it has no horizontal linear axis; instead it can rotate up to 110° on its pedestal.” And also like the E-pic, the swivel arm is made of lightweight composite. The new picker can handle payloads up to 2.2 lbs, the company said, and is designed for presses of 60 to 220 metric tonnes. It uses the same R16 control as the E-pic, or can be integrated into the CC300 machine control. The standard control interface is compatible with any injection molding machine on the market, Engel said.

A matter of control
The new R-30iB Plus robot controller from Fanuc features an iPendant with an enhanced screen resolution and processing capability. The user interface, iHMI, has an icon-based screen which is designed to provide a familiar and easy-to-use experience with intuitive guides for setup and programming. It also includes tutorials from the main homepage which has a design common to Fanuc CNCs, enabling easier use of three- and six-axis robots. Processing performance for both hardware and software has been improved in the R-30iB Plus, Fanuc said, and the signal processing cycle has been shortened. “Compared to past controllers, signal output timing has been enhanced, expanding possible applications to systems which require a high level of positioning precision, such as laser applications,” the company continued. The vision function of R-30iB Plus has a new camera interface which increases four times the speed for transmitting images from the camera, together with a simplified cable configuration. “With improvements in the user interface, the setup of the vision system can be handled much more efficiently,” Fanuc said.

A smaller range of compact, servo-driven linear robots has been added to the LRX line from KraussMaffei Automation. The new LRX 50, 100, and 150 have payload capacities of 5, 10, and 15 kg (11, 22, and 33 lbs) respectively, and are suited to injection presses of 35 to 650 metric tonnes. They compliment the LRX 250, 500, and 1000 models that carry 25 to 100 kg (55 to 220 lbs). “The new models have rack-and-pinion drives instead of toothed belts, providing a high level of speed and precision,” KraussMaffei said. Air/vacuum lines and electronics are protected on the Y-axis by quick-change covers, the firm continued, and a central air/vacuum portal facilitates fast gripper changing. The new axis design is said to ensure free access to the machine hopper and barrel. “Fully integrated into the MC6 press controls, a new digital vacuum monitoring system with integrated air-saving function can reduce compressed air requirements by up to 90 per cent,” KraussMaffei said. “Also, leakage monitoring detects malfunctions that require maintenance.” Finally, the servo-driven wrist axes were redesigned for minimal opening stroke and greater load capacity; their smaller drives reduce both weight and energy consumption, the company said.

Kuka Robotics has introduced a new focus on “solutions rather than components” with a series of custom package concepts at various levels of integration. These “Ready2” solutions can include preconfigured software and hardware for specific functions or complete turnkey cells. Kuka works with partners such as robot integrator FPT Robotik GmbH in Germany. Among other things, FPT can program a Kuka robot with a Fanuc-style operator screen for users who are already familiar with Fanuc equipment and software. The Ready2 packages include “Ready2 grip,” a pre-configured gripper package based on the KR AGILUS; “Ready2 spray,” for painting tasks; “Ready2 powerlink,” for integrating Kuka robots into third-party controller systems; and “Ready2 pilot,” a package for the easy control of a robot with no training requirements.

All the right moves
The Success 5, the newest and smallest in Sepro Group’s range of general-purpose Cartesian robots for injection molding, is designed to deliver precise, three-axis servo performance in simple pick-and-place and stacking applications. First announced in late 2016, the Success 5 is now available to equip injection molding machines up to 80 tonnes. The device is equipped with a standard R1 pneumatic (0° to 90°) rotation, but offers an optional R3 rotation (0° to 90° or 0° to 180°). “The standard Success 5 can be configured with horizontal strokes of 1,000 or 1,500 mm, a 400 mm demolding stroke, a 1,000 mm vertical stroke, and a 3 kg maximum payload,” said Jim Healy, vice president of sales and marketing at Sepro America. Other standard features, normally available only on more expensive robots, include simultaneous motion on all three axes; a “Y-free” function that makes it easier to program ejection tracking and saves on gripper costs because of its simple design; multiple vacuum and pressure circuits that allow degating, selective part placement, and other functions; and quick disconnects for fast end-of-arm tooling changeovers. Standard equipment for the Success 5 also includes Sepro’s Touch 2 control, which features a touchscreen and simple, icon-driven instructions that allow even inexperienced operators to create basic pick-and-place robot cycles. “The Success 5 comes standard with the Touch 2 control, but can be upgraded to Sepro’s Visual 2 controller, which gives the processor the ability to tie into the downstream automation,” Healy said.

Staubli’s new TX2 line of collaborative robots are six-axis machines designed to operate in high-volume manufacturing, Industry 4.0 applications, and man-robot collaboration under all production conditions. The new TX2 line is offered in six model series — TX2-40, TX2-60, TX2-60L, TX2-90, TX2-90L, and TX2-90XL — and is capable of handling loads between 2 to 15 kg, with a reach between 515 and 1,450 mm. They also have a separate safe digital encoder for each axis, and an integrated safety board. All safety features comply with the stringent requirements of the highest safety category, SIL3/PLe. Every movement of the robot is monitored by sensors, Staubli said, and all the coordinates of the robot, as well as its speed and acceleration, are recorded in real-time. “The TX2 series also feature configurable, safe input/output modules, and real-time Ethernet fieldbus systems,” Staubli said. “They are also IP65 and IP67-certified, which allow them to be used in cleanroom and hygiene conditions.”

Cartesian servo robots for injection presses of between 150 and 400 tonnes have received several upgrades from Wittmann Battenfeld to allow them to operate more smoothly as part of a system. W821 and W831 robots now carry payloads from 10 to 15 kg (22 to 33 lbs) and handle demolding strokes up to 800 mm (31.2 inches). In addition, Wittmann has completely overhauled the optional servo wrist axes for these models. (A pneumatic swivel axis is standard.) “The updated servo rotational C-axis does not affect the payload capacity,” Wittmann said. “The servo rotational B-axis (rotating the gripper around the vertical axis) does reduce the payload to 10 kg.” These features offer the user a choice of a servo B-C-axis or a servo B-axis combined with a pneumatic C-axis. According to Wittmann, a special feature of the new wrist axes is that they do not change the acceleration/deceleration profile of the robot axes, while other robots reportedly require adjustment of the movement profiles to accommodate supplementary equipment.

So if you still think robots belong in solitary confinement, it’s about time you liberate yourself to a new era of automated opportunities.

This article was originally published in the September 2017 issue of Canadian Plastics.