A Quebec-based technology company has developed an RFID social distancing tracker that employees could wear in the workplace that alarms if they get too close to another worker. 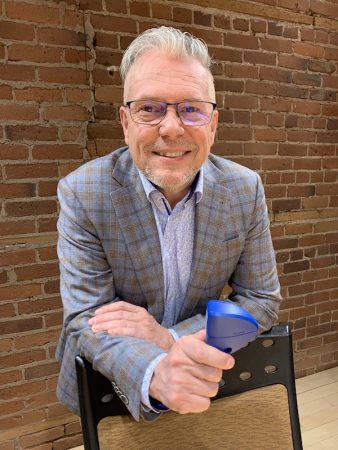 Noovelia, a company that specializes in digital and physical flow management for businesses, has named its social distancing tracker Kencee u2.

Kencee u2 was adapted from one of Noovelia’s existing products that has been tested in aeronautic environments. The device operates with radio frequencies
(RFID) via ultra-wide band technology, which allows for maximum accuracy.

The tracker detects other trackers, so it is only effective when all employees are wearing one. If an employee breaches the recommended two-metre (six-foot) distancing measures, the tracker emits a sound, lights up and vibrates.

“The actual pandemic hits way beyond the imagination and this crisis is far from being resolved,” says Alain Lemieux, vice-president of strategic development and acquisitions at Noovelia.

The tracker can be used “to protect the employees’ health, who are the principal resources of businesses and, thereby, the business continuity,” he says.

Kencee u2 is designed, manufactured and assembled in Louiseville, Quebec.

The project is currently in phase one, says Lemieux, with 10,000 units of Kencee u2 to be produced in the first run. Deliveries will start in mid-June.

“Our team is already working on the further development of our tracker to offer, in future versions, different possible configurations including access management with logbook, movement history and proximity alarm traceability, as well as real-time localization,” he says.