An Ontario company has custom-built an automated assembly machine that aligns with a historic copper refining process, giving it a new lease on life around the world 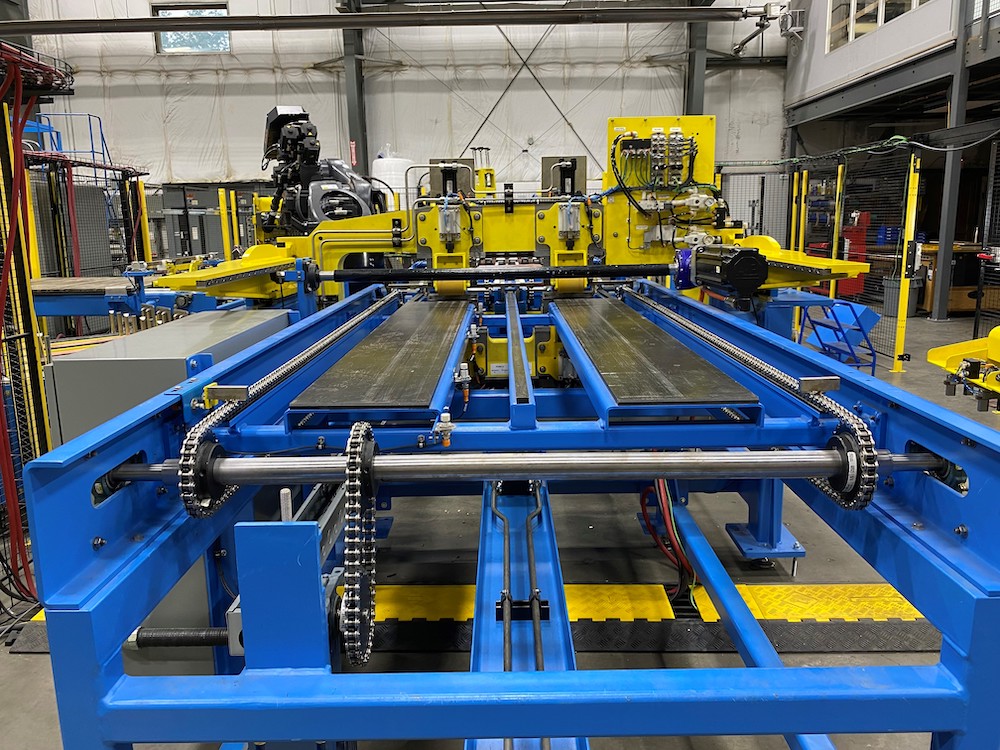 Compared to their new cousins, older manufacturing systems are far from optimal – they’re usually labour-intensive and inefficient in a variety of ways. But these old warhorses definitely have their value.

Companies in various specialized sectors nurse them along for years, even decades, scrounging parts and hobbling together solutions when repair is needed, all for one simple reason: these old machines fit with their greater existing process and, until recently, no one could offer their owners a cost-effective alternative.

No one, that is, except firms like Sudbury, Ont.–based Ionic Mechatronics. In this case, the client (Sierrita Copper Refinery, nestled in southwest Arizona’s Sierrita Mountains) rather desperately needed a new copper starter-sheet assembly machine – and, for the better part of 2019, one of the Ionic teams built just that. It’s one of many custom machines the company produces for clients in various heavy industry sectors every year.

“The existing machine required three to four operators for loading and assembly, with several stations and conveyors,” says Ryan Catton, Ionic’s business development manager. “After a lot of data gathering, on-site visits and analysis, we created an automated system that removes most of the conveying and manual intervention from the process. Robots handle the sheet handling and assembly, and workers are freed from the risk of repetitive strain injuries and back injuries from lifting and placing heavy metal pieces.”

The first robot picks up what is called a “blank” sheet from a bin and places it on a “table,” where it’s flattened. Meanwhile, another robot is picking up the other two in-feed parts: hanger bars and loop material.

“Production hardly paused. When our system was ready, the new and old systems ran in parallel for a little while and then the controls were flipped over with only about a day of downtime.”

When the assembly machine senses all components are present, it folds and staples the components, creating a starter-sheet. The third robot moves each finished sheet to a conveyor, one every 19 seconds, and then those sheets are used to collect dissolved copper in the refinery’s electrolytic cells.

These three robots have customized suction-cups and mechanical grippers. Ionic chose KUKA robots because the company has used them in similar projects, and supplier consistency where possible helps to ensure servicing efficiency across customer sites. Ionic’s local “partner-on-the-ground” is CAID Industries, which provides front-line support for the entire system. 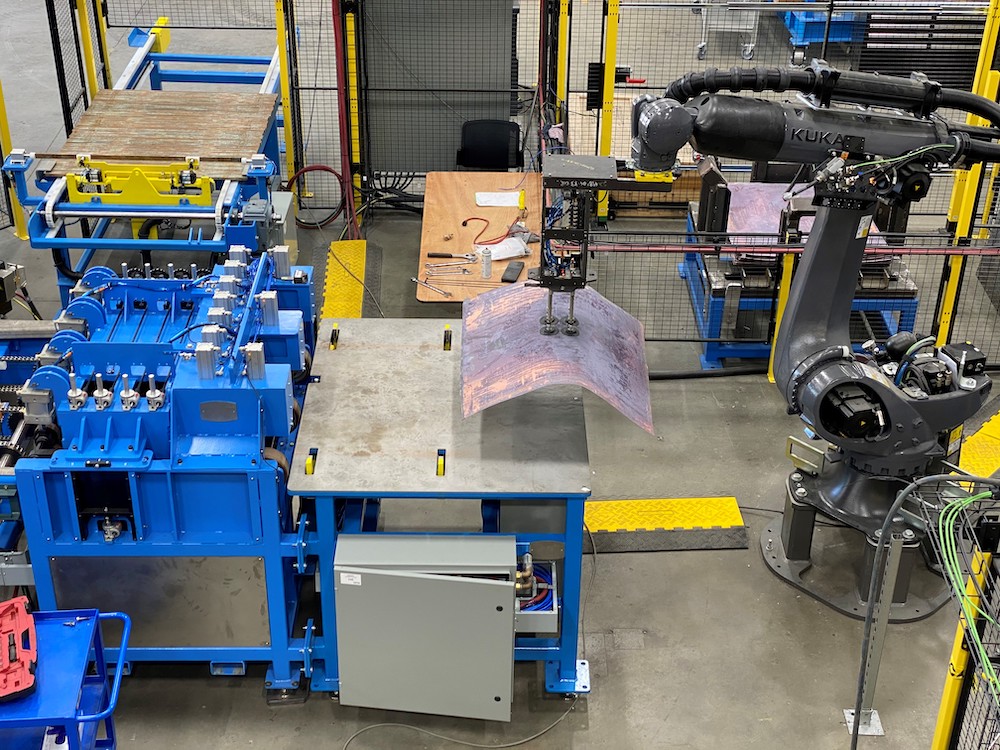 Every build for Ionic includes analysis of things like desired throughput rate, how to integrate the solution with existing processes and the space footprint available.

“In this case, we had a limited footprint, but we were lucky that we had room to build in another area so that the existing starter-sheet assembly machine was able to run during the build,” says Catton. “Production hardly paused. When our system was ready, the new and old systems ran in parallel for a little while and then the controls were flipped over with only about a day of downtime.”

Because a refinery is a corrosive and humid environment, stainless steel or painted carbon steel were required instead of materials made from aluminum or coated with zinc, for example.

But besides being able to stand up to corrosion, the system also had to handle variability (thickness, width, nodulation, slight warping) in the blank sheets, hanger bars and loop material. But Ionic designers had made systems adaptable to a range of tolerances before, and so this was nothing new.

“We look closely with the client at quality variability, ambient temperature changes and all other relevant factors that could affect system operation, and agree on the range of tolerances we’ll build into their new system.”

Overall, handing a range of tolerances is a matter of determining the scope of variability for each parameter, and engineering the assembly machine and robots (hardware and software for both) to handle the top and bottom of the scope.

“There’s also a range of temperatures in many refineries,” Catton explains. “They’re generally open to the environment and you can get pretty hot and cold air coming in at different times of the year. So, we look closely with the client at quality variability, ambient temperature changes and all other relevant factors that could affect system operation, and agree on the range of tolerances we’ll build into their new system. The client ensures that in-feed component quality and environmental conditions stay in the agreed-on range.” 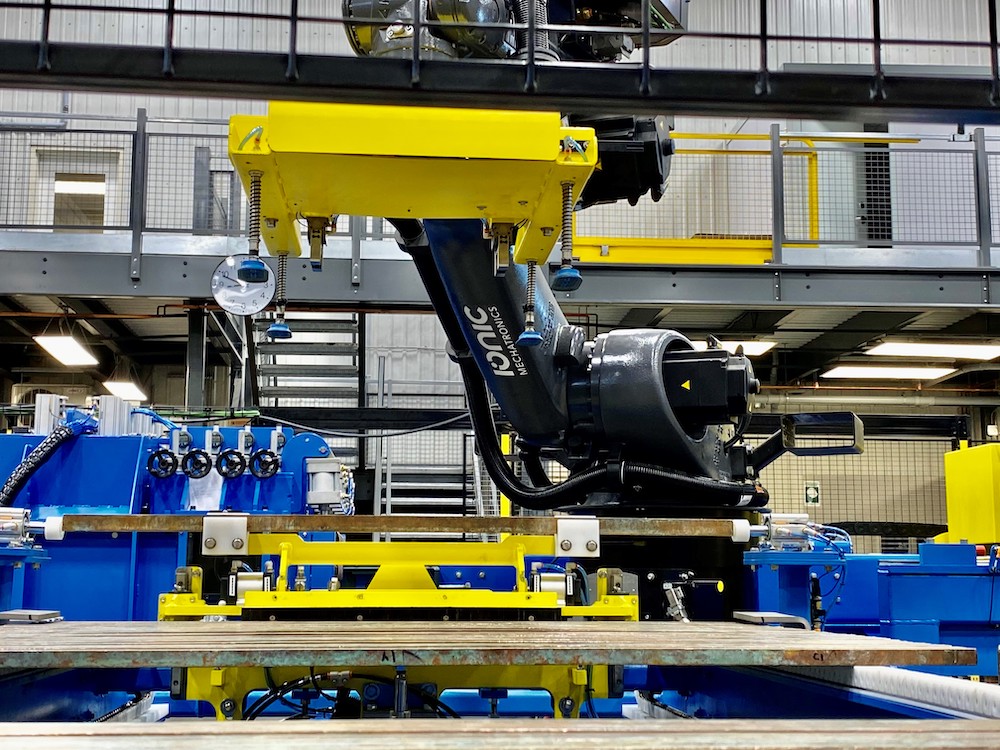 Along with significant automation of starter-sheet manufacture, Ionic has also automated safety of the process. “We specialize in automation of safety design,” says Catton. “We do careful risk assessments and make sure not to introduce new risks. In this case, everything is guarded so there are no operators in the robot movement area, and if operators do have to enter, we’ve incorporated light curtain sensors so that movement stops before a worker could reach any risk point.”

In case of loss of power, everything reverts to a safe position using gravity or electricity. “We also incorporate a lot of redundancy into safety systems,” Catton adds. “There are back-up relays which take over in case the first fails and operators are alerted to any issues within the safety circuit.”

Indeed, other than enabling Sieritta to keep the starter-sheet process, the primary benefit of the new system has been improved safety. “There is now no manual handling of the parts and thus no repetitive strain injuries,” says Catton. “Also, the old machine had frequent stoppages due to mechanical failures.” And although the new Ionic system can enable faster production than what is occurring now at Sieritta, the refinery cannot support added capacity at this time.

With this starter-sheet system now built in Arizona, word is spreading and other starter-sheet refineries in various parts of the world are approaching Ionic to investigate options.

Catton explains that over the years, the starter-sheet process “was essentially abandoned as automation evolved and many refineries went to a permanent cathode process, but there are many dozens of plants around the world that still use starter-sheet. So, it’s very satisfying for us to provide a cost effective way to give a traditional refining process a bright future, and also reduce health and safety risks for employees.”

Treena Hein is an award-winning freelance writer who is based in Ontario.

This article appears in the March/April issue of Manufacturing AUTOMATION.