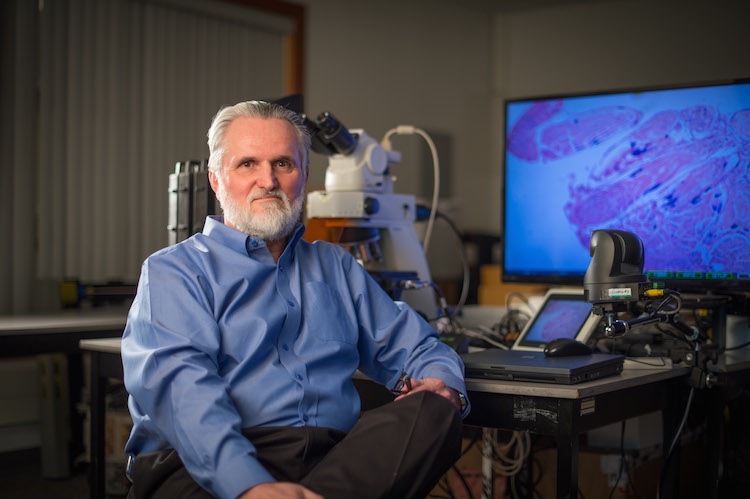 Jun. 17, 2015 – A North Island College, B.C., employee’s love for his son has lead to an invention that will soon allow all grade school kids in the Comox Valley access to Lego robotics online all year long. Two years ago, Albert Balbon’s son came home from his Grade 5 class excited about being able to experiment a travelling kit of Lego robots.

“Chase would go around to different elementary schools with a kit of about 30 robots for robotics training for three weeks or so. He was excited but then he would have to move onto the next school after that,” notes Balbon.

“It was all he could talk about,” he says, recalling when Chase first came home after using the Lego EV3 robotics. “His eyes lit up when he talked about it and then it was gone. He knew I was developing online access to microscopes and science labs at NIC and he asked me if I could find a way to connect students to Lego robots online.” This way, he would still be able to work with these robots and his friends who he had been programming with, he explained.

Balbon reached out to Stewart Savard, the robotics instructor at the Comox Valley School District’s North Island Distance Education School (NIDES) and together they found a way to combine Lego robotics with technology in NIC’s Remote Web-based Science Lab (RWSL). Under the agreement, teams of students at home or in class will be able to program and operate Lego EV3 robots housed in RWSL over the Internet.

The idea is the technology allows schools to put science experiments online for students to do labs — a concept Balbon says he’s been working on for more than a decade. He says he first invented this technology to offer hands-on science labs for an NIC instructor in Bella Bella, with the goal of allowing students to work in groups from “almost anywhere they wanted” including at home or in school. All that is needed for a student to participate and collaborate with others across the globe in real-time is access to a computer and an Internet connection.

Groups of up to four participants are best, suggests Balbon, as only one student can control the robot at a time. There are also different cameras they can pan, tilt and zoom when building and programming the robots.
Advertisement

Maintaining the interest
What makes this technology successful is that it takes learning out of the classroom, so that the curriculum is not restricted to “the bricks and mortar” or finances of an institution, says Balbon. “The reach is quite phenomenon,” he says. “I’m amazed at how far we can go with this technology.”

According to Balbon, the technology can be incorporated into school curriculums, after-school robotics clubs, and more — “there’s a lot of options here that are available.”

“I know there are a lot of robotics courses […] but I know of no one that does the teaching over the Internet and actually gets them to control the robot through their computers,” says Balbon. “It engages the student. They know it’s real, not a simulation.”

This engagement is key when attracting students to STEM (science, technology, engineering and mathematics) careers, he believes, pointing to his son as an example. Now in Grade 7, Chase’s interests have shifted more towards music.

“He’s still got the interest in robotics but not as much as during that three-week period. That was the time that if we were able to capture it, maybe he would still have that interest now. I hate when [a student’s] interest is pique and then it is taken away from them where it actually should be cultivated.”

Since the lab’s inception, Balbon has presented the technology to the White House and the Association of Canadian Community Colleges, shared programming with the European Space Agency and NASA, and received funding from the Bill and Melinda Gates Foundation and the U.S. Department of Labor.

Nearly 50 students have already experimented with the Lego robots lab, with another 200 students in the district set to test it out this June.

Balbon’s work on RWSL recently earned second place at the Wharton School of Business’ international Reimagine Education Awards in the Natural Sciences Discipline Awards category. The awards were developed to identify the most innovative approaches in higher education to enhance learning and student employability.

— With files from Christiana Wiens