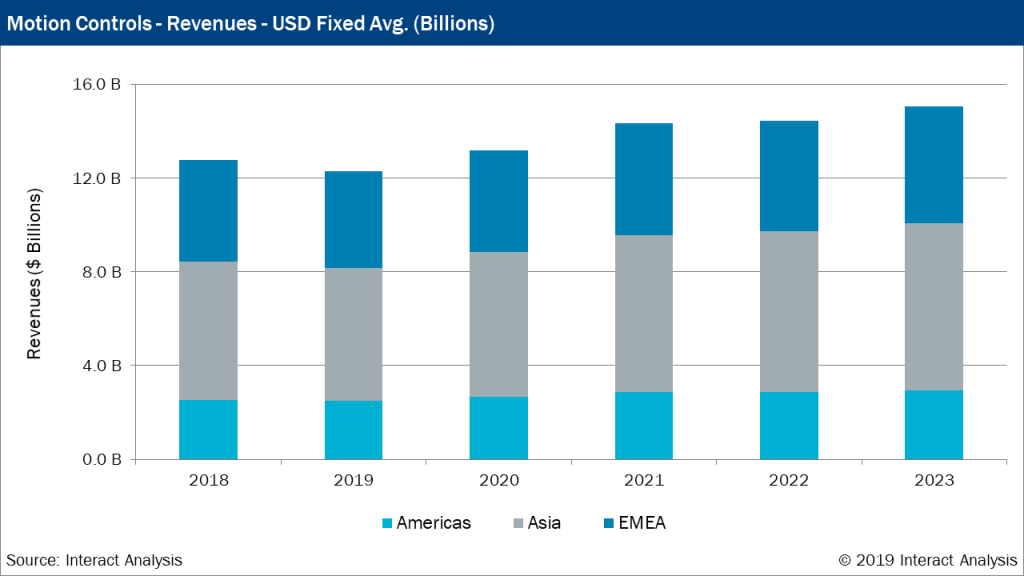 Despite a small decline in 2019 (-3.8 per cent), the report outlines how the market for motion control products will grow strongly, ultimately exceeding $15 billion in 2023. Also noteworthy is the firm’s belief that the motion control market will outpace growth of global manufacturing production from 2020 onwards.

The positive outlook holds true despite the torrid time currently facing machine tool vendors which, as the single largest consumer of motion control products, generated over a third of motion control revenues in 2018.

The move to more motion control

Interact Analysis points to several sectors which are helping to drive a more positive outlook for motion controls. These include food and beverage machinery, packaging machinery, robotics and material handling equipment, especially equipment for warehouse automation and intralogistics. Together these sectors generated just under a quarter of total motion control revenues in 2018 and are forecast to account for closer to 30 per cent in 2023.

The report outlines further factors strengthening the outlook for motion control demand, including the trend for decentralization. Here, higher-protection ratings are helping to advance the market for particular motion products. Although even combined the opportunity is small compared to the total (representing only 2.4 per cent of the global market in 2018), the findings show that revenues for both products are projected to experience higher growth than the rest of the market, driving their combined value to exceed $500 million in 2023.

Interact Analysis says that geographically, six regions – China, USA, Japan, Germany, Italy and South Korea – will continue to dominate market revenues. China, in particular, is expected to add significant revenues over the next four years, making it almost twice as big as the United States. In industry terms, sectors using metal cutting tools remain the largest in revenue terms, however the strongest overall growth during the forecast period came from mobile robots and industrial robots, which are the only ones forecast to experience growth in 2019 versus 2018.

“Although the motion control market may be considered fairly mature there are important trends impacting its future growth helping drive revenues at an above average rate for the long-term,” says Tim Dawson, research director for Interact Analysis and principal analyst of the motion controls report. “Couple that with product releases from new vendors, plus expanding portfolios from existing ones; and the fundamentals for this industry appear very strong, even despite headwinds in certain key sectors.”