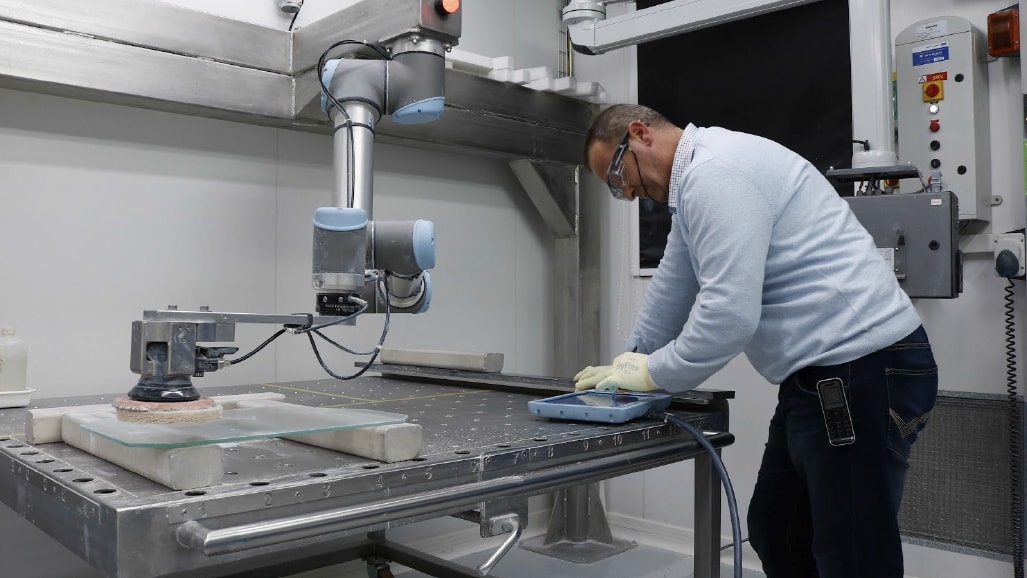 Dec. 13, 2017 – Saint-Gobain was founded in 1665 as a public society manufacturing luxury mirrors and glass under King Louis XIV’s reign. The corporation has maintained its high quality standards through the centuries, expanding its business throughout the whole housing industry. Now a global company, it employs more than 185,000 people worldwide.

Near its original headquarters in the outskirts of Paris, Saint-Gobain still works on high-end glass production. Human labour provides high-value work to the finished product. But some tasks are more tedious than others. This is why the Sully-sur-Loire factory, like many other Saint-Gobain plants, began to deploy collaborative robot cells into their process about a year ago.

Building a factory of the future
Freeing employees from those gruelling tasks begins with finding a technology that would do the job on their behalf. Saint-Gobain’s Digital Manufacturing Manager, Ignacio Sanchez, had to find a solution for a difficult glass polishing process. The operation is painful, frequently causing musculoskeletal disorders for workers.

“The operator had to polish all of the glass surface, repeating the same movement on and on,” Sanchez explains. “He then does the surface preparation of the glass before it becomes one of many layers of an armoured glass. This second step is a lot easier. We wanted an automated solution for the polishing part of the process.”

“Saint-Gobain’s application had a very important diversity of reference points. There was also a problem of production space, since the cell had to be deployed in a small area in order to work in collaboration with the operators. We naturally chose to work with Universal Robots on this project considering safety requirements, the ease of use that was required, all this in a small space. We chose the UR10 model to be able to reach every area of every type of glass.”

A different path for each glass
HMI-MBS performed many tests at its lab, which is about 15 minutes from Saint-Gobain’s plant. The first proofs of concept did not deliver viable options.

“We ended up in a dead-end,” recalls Bouhet. “Then we had the idea to use the FT 300 module with the path recording function. We managed to integrate it into the robot and continued with tests at our offices. We then moved to Saint-Gobain and worked with the operator to see if the product met Saint-Gobain’s expectations.”

Testing at HMI-MBS helped minimize the time needed to implement the robot into production. When everything was ready, the UR10 and FT 300 combo took part of the work over from the operator, and both started working together.

“Without the FT 300, this operation would have been quite complex since the programming of a robot movement that must follow a volume in space is a complicated thing to do,” adds Bouhet. “With the path recording function of the FT 300, the operator can grab the device and make the movement; the Universal Robots UR10 then records and reproduces the operator’s motion.”

For Christophe Legeay, Methods Technician at Saint-Gobain Sully-sur-Loire, automating the polishing process of each layer of armoured glass gave relief to operators who were previously assigned to this task. “It allowed them to no longer experience vibrations in their shoulders or perform repetitive movements. The installation of the robot was more than welcome,” he explains.

From now on, all the operator has to do in the polishing process is program the proper path for the product and set the glass for polishing. “The robot asks us to place reference marks to check the positioning. You cannot run your application until you have validated your positions. As soon as the validation is done, you press start and the robot starts running.”

Human and machine collaboration increases productivity
While polishing is in progress, the operator simultaneously washes the glass that was previously polished. Then it’s time for surface preparation, a process in which human labour brings much more value into the product.

“We assigned the robot to the hardest part of the polishing process,” recalls Sanchez. “During this time, the operator can focus on surface preparation. We’re able to produce the same amount of work in two eight-hour shifts instead of three, before the robot arrived. We’ve achieved ROI in less than a year.”

Capacity increased by 30 per cent, allowing Saint-Gobain to deliver orders on top of those initially scheduled. “A product might come back once every one or two years. We often have to create a new program. By empowering the operator, allowing him to do the program himself, we avoid calling an integrator every time a product comes back into production. This is one of the goals of our digital manufacturing project, in which cobots will play a huge role,” Sanchez explains.

In a factory where human labour delivering high-end quality has been a tradition over the last 350 years, robots are seen as a helping hand for human workers aiming for perfection.

“We do not cut jobs like it’s often perceived when a robot is installed somewhere,” concludes Sanchez. “It’s a collaboration between man and machine that allows us to remove gruelling tasks from the hands of operators. This is the goal and it’s fairly well perceived here.”