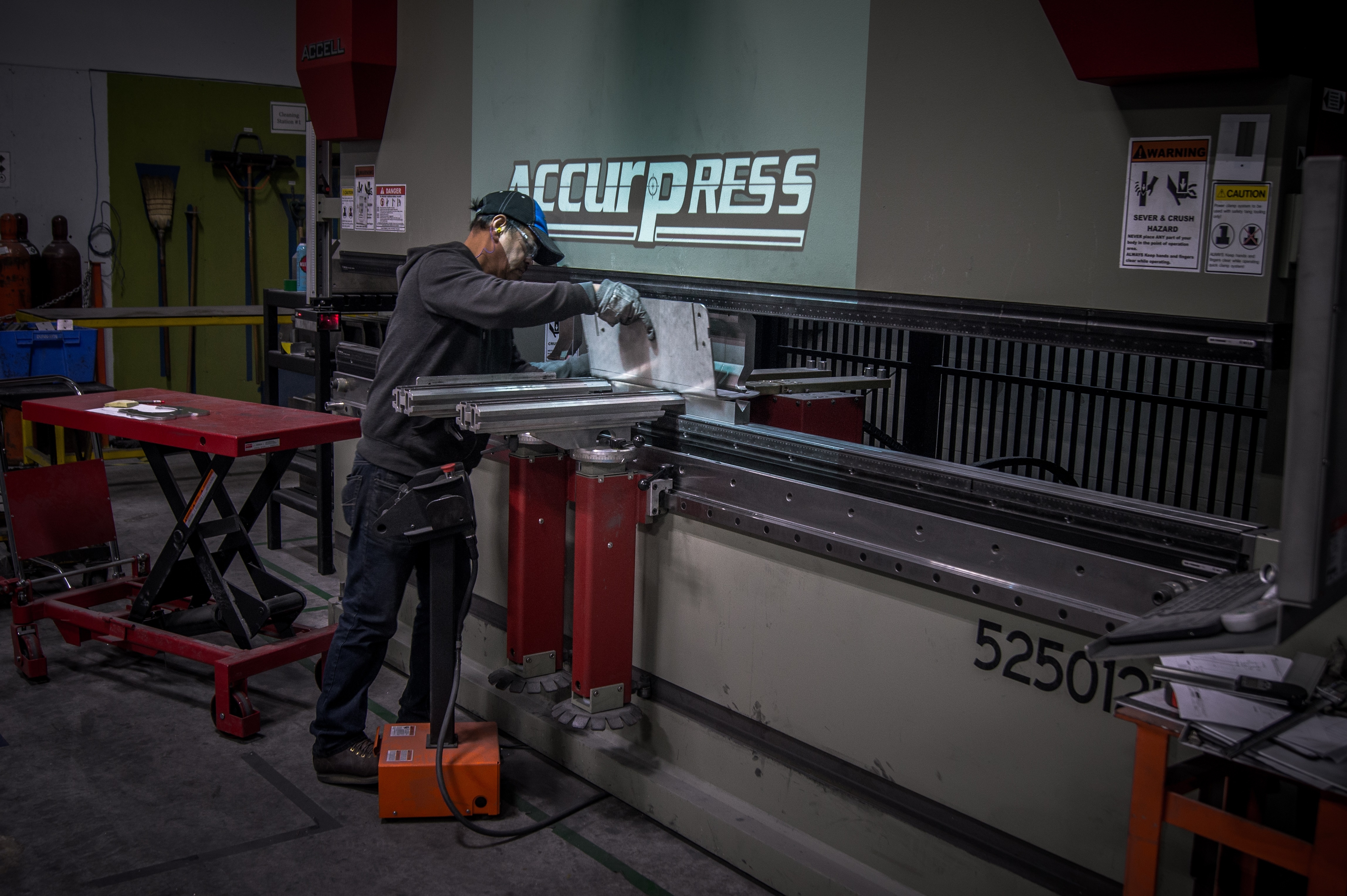 Jan. 29, 2018 – Companies ramp up automation for a wide variety of reasons, but the how and the why are different in each situation.

For HERD, headquartered in Winnipeg, Man., investing in new equipment to automate some of its processes allows it to produce large amounts of a new product line. More automation was added in order to make HERD’s manufacturing more consistent and flexible, easier on its workers and, of course, faster. The manufacturer will soon be shipping the newest versions of its hotly demanded transport truck protection products — AeroPLUS truck guards and stainless steel grill guards — at a pace it has never achieved before.

Before we get into how the new product and its raw materials have been integrated with new equipment to make company’s ramped-up automation successful, let’s delve briefly into its history. Back in 2003, founder Mark Daudet could see there was a demand for protection that would custom-fit North American truck models, and he decided to look into manufacturing his own products. He connected with a company in Australia to learn the ropes. Truck guards are often referred to as ‘roo bars’ in Australia, and while they are very popular for protecting transports in collisions with kangaroos, they are essential on the ‘road train’ trucks that drive across the outback — trucks that pull three, four, five or even six 48-foot trailers behind them. Daudet and his startup team studied hard, tried different designs and manufacturing methods, and eventually marketed several lines of HERD’s stylish transport truck guards for various major brands. The truck guards replaced the factory bumper while still protecting the grill.

According to Daudet, the products don’t just prevent damage from collisions with animals such as deer or moose, they protect trucks from the many incidental bumps and scrapes that happen all the time on the road. The company now has about 100 employees and sells its products across Canada and the United States. Working with extruded aluminum is how all products are made.

“Manufacturing with extruded aluminum is a very labour-intensive process,” explains Dave Gata, director of operations. “There are three components in fully integrated guards: the bumper section, the uprights and the tubes. The bumper and uprights go through a similar process. The uprights start off as C-channel pieces, cut to size and shape, followed by welding, sanding and polishing. The bumper sections are manually formed from extrusions, with holes put in and angled cuts made to allow for airflow and installation of signal lights. Then, it’s onto MIG welding, which again involves lots of angle measuring, as well as the addition of hinges so that the whole guard can be lowered to access the engine for maintenance.”

The third component – the tubes – come to the company as extruded pieces, which are then cut and bent to size for the best fit and finish for each truck.

All three components are now ready for assembly. Parts are tacked and then MIG welded, polished and buffed. The company uses a proprietary set of aluminum finishing steps to achieve a spectacular mirror finish, involving various tools, polishes and techniques. Lastly, hinges are tested and various pieces of hardware and components are added in preparation for shipment and truck mounting.

“A lot of people are blown away by what we accomplish with aluminum using grinders, skill saws and routers,” Gata says. “Our people are highly skilled and are basically doing woodworking but with aluminum.”

“The new AeroPLUS was engineered to be lighter and stronger than all previous HERD truck guards, providing superior protection for a truck’s vital systems,” explains Leroy Peters, director of marketing. “It’s the best product we’ve ever made and is a reflection of the advancements in vehicle design.”

The purchase of a CNC press brake was the only way to make on-site manufacturing of the AeroPLUS feasible. “From the moment we began planning this new product, we knew outsourcing the cutting and bending of flat pieces would cost too much money,” says Gata. “But it’s not just about cost. Using laser-cut flat aluminum sheets and having our own equipment gives us endless possibilities for shaping and bending and forming products to specific brands of truck. With flats, we have a complete blank page and complete flexibility.”

The new grill guard product line is made using tubular stainless steel and offers multi-point brackets that use both the tow receivers and the truck’s frame for mounting, along with box uprights and right-sized tubes for strength.

“The stainless steel comes in as flat sheets with holes already laser cut, and then we pre-form the product using our new CNC brake press and CNC tube bender,” Gata says. “Prior to the arrival of the tube bender, we had to cut and weld two stainless tubes together that were bent by a vendor, which really added to our process time. Before, we were pushing 20 to 30 hours to get one grill guard done and now we’ve halved that. It’s astounding.”

Implementing the bender has also slashed prototyping time. “We used to rely on our vendor but now our designer knows just what our bender is capable of, and that means so much speed is added to everything in the process,” says Gata. “We can produce a prototype in one day as opposed to waiting for the vendor to fit us in, which could mean two to four weeks. So while it’s hard to gauge ROI on this machine, with just being able to massively decrease prototype time, it’s an invaluable purchase. We just need to have the design program finished and we’re good to go. The whole process is determined by us and how fast we can get things done. The design process before was like molasses and now, it’s like lightening.”

The brake press was installed in October, and with training time, it only had about 50 hours on it in early November. “We are so good at what we do with aluminum, and so skilled with all the tools we have been using for so long, that some employees don’t think the press will speed up the entire process much,” Gata explains. “But it’s sure to, and it’s really about the precision and consistency it will provide.”

Gata adds that higher production levels will mean more labour will be needed in other departments, such as grinding and polishing. “I’d really like a second brake press,” he says. “In the future, we want to do more bending in-house, and work on how we can move production eventually away from aluminum extrusion to aluminum flats instead.”

HERD only did a limited rollout of the AeroPLUS and Grill Guards in 2017, and was focused in the fall on making a suite of SKUs for various fleet brand models to get ready for a full product line launch in early 2018. With its new automated processes fully in place and new labourers hired, this Canadian company is well-positioned to meet the expected onslaught of orders.

This article was originally published in the January/February 2018 issue of Manufacturing AUTOMATION.