Features Opinion
The critical value of purposeful work in manufacturing 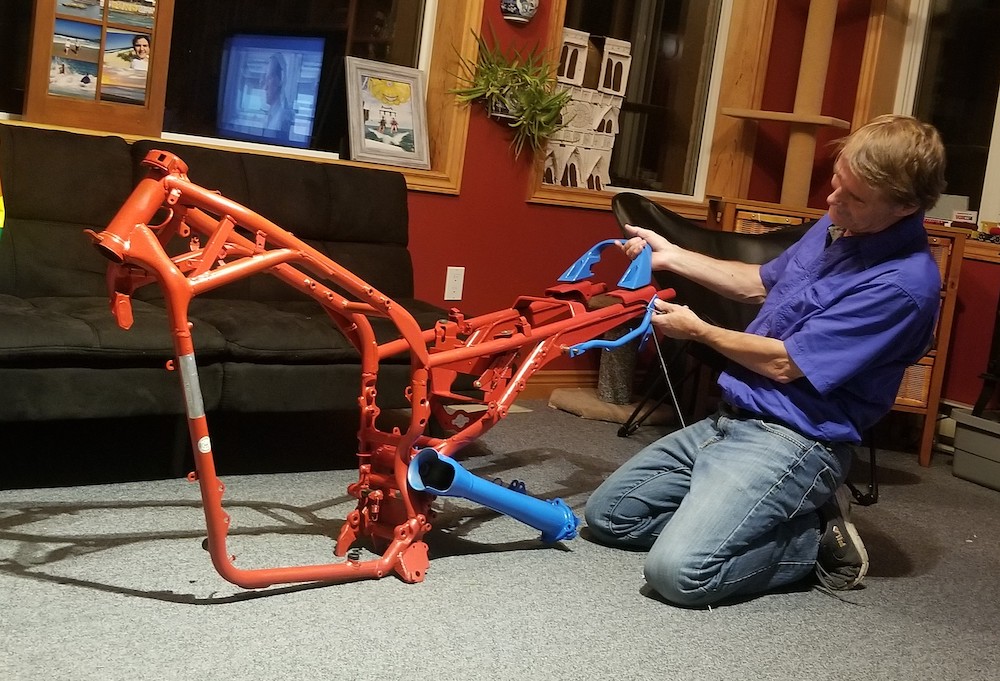 The author in his living room. Photo courtesy Paul Hogendoorn

How do you end up building a motorcycle in your family room? (It’s actually not too difficult to explain).

My wife and granddaughter have kept me plenty busy the last eight months.

At first, I thought they were just creating projects to keep me sane, to keep me from going stir crazy, as I wasn’t getting on airplanes, traveling to faraway places and doing what I love about work most – visiting plants and helping manufacturers make their companies stronger by connecting to their machines, and most importantly, with their people. In other words, by reconnecting meaning with work, and dignity with labour.

The first project was my granddaughter’s idea. We have a run-down and dirty old pool shed that, in her mind’s eye, would make a great “she-shed.”

It started simply, by cutting in two windows, squaring up the frame, and painting it all fresh, inside and out. Then came the furniture, fridge, microwave, 42-inch smart LCD TV and Nespresso coffee maker. To protect that investment, a new roof was required. And an air conditioner.

The second project was necessitated by the first; I no longer had a pool shed for the chemicals, equipment and odds and ends associated with the pool. So, a small garden shed between our house and the neighbour’s had to be enlarged, but we quickly determined that it had to be replaced.

To replace it meant levelling the slope between the houses, which meant building a retaining wall, on a proper footing, with drainage considerations. The net result is a beautiful 16-foot by six-foot secure storage area for everything that used to be in the pool shed (which is now the “she-shed”).

Then came the upstairs bathroom. It too started simple, but grew. What was going to be a new single sink and a paint job became a new vanity with double sinks, which meant upgrading the plumbing that was embedded in the walls. After a great start to the project, I encountered the first of several “expected unexpected” problems.

There is a tactile and palpable sense of satisfaction that comes from completing tasks that have tangible and visible results, which most people have an inherent need for – especially people who are drawn to manufacturing careers.

After cutting into the main, I discovered that the house, built in the late 1960s, was plumbed using 1-1/4 inch ABS, not 1-1/2 inch as has been the standard for a few decades – and my local Big Box had virtually nothing to couple into the now separated drain, with the family Thanksgiving dinner only a day away. With classic “just-in time” execution, we managed to get the project done and avert a bottleneck at a critical family location.

In between those three projects was one that I have been picking away at for years – something I refer to as “wrench therapy.” I’ve been deconstructing and reconstructing an early ’80s motorcycle, more for the pleasure of wrenching than riding.

It was a garage project until the reconstructed garden shed no longer had room for the snowblower and lawn mower, due to the pool equipment and furniture moving in. Relocating the lawn and snow equipment into the garage forced me to move my motorcycle project, and the only place available was the family room. (Pretty rational explanation, right?)

But through it all, I learned a couple of very valuable lessons that are applicable to all manufacturers in these disruptive COVID-19 times.

The first lesson is that work has inherent human purpose, far more than just a means to earn a living. There is a tactile and palpable sense of satisfaction that comes from completing tasks that have tangible and visible results, which most people have an inherent need for – especially people who are drawn to manufacturing careers.

Many workers lost their connection with this source of daily satisfaction, either temporarily because of short-term shutdowns, or permanently because of job loss. The cost of this kind of loss is catastrophic and immeasurable financially.

The second lesson I learned is that periods such as these offer us all a chance to get things done that we would otherwise not have had a chance to do.

I have encountered many companies that have taken intentional steps to make themselves better by adopting new technologies; executing and completing projects they initiated in previous years that were often delayed; reskilling their workforce; reigniting the energy in their workforce by inviting suggestions and input; or by creative out-of-the-box thinking and planning.

This was a time to do all of those things, but not everybody did them. Some chose to sit by, try to ride it out, and look forward for everything to return to normal.

The good news is, it’s not too late to initiate – and complete – a few interesting and purposeful work projects. It’s good for you, your company and your people. So, what’s still on your project list?

This article originally appeared in the November/December 2020 issue of Manufacturing AUTOMATION.

Related
Redefining success in manufacturing
Hitting the trifecta: important improvements for manufacturers
Zero to one: launching a new manufacturing project
Gamification: why it matters to manufacturing
Tags