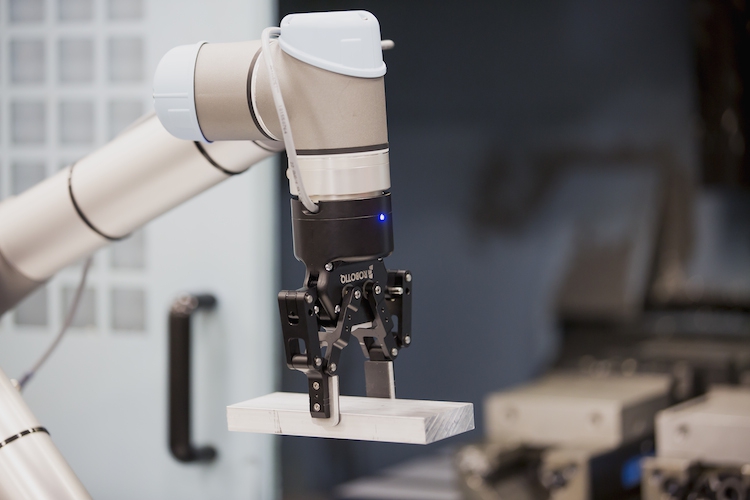 Dec. 11, 2015 – Robotic grippers are an integral part of many manufacturing lines today, and for good reason. They provide, among other things, very different gripping strengths and extensive handling dexterity for handling objects of various sizes, weights and fragility levels. They also allow for quick setup and changeover from one complex assembly task to another, saving critical time and money.

This type of gripping technology is exactly what Robotiq of Levis, Que., specializes in. Founded in 2008, the company has steadily grown the markets for its grippers, which can be found in factories worldwide. Robotiq grippers are used for three main tasks: general universal assembly, machine tending (feeding machines and also placing the completed part for the next step), and product testing. About half of Robotiq’s sales are in North America, with a quarter in Europe and another quarter in Asia. The most common sectors using Robotiq grippers are SME contract manufacturers, general industry component manufacturers, automotive tier, and electronics.

“The common need in all these companies, no matter what the sector, is flexibility,” explains Robotiq president Samuel Bouchard. “Companies generally manufacture a lot of different parts and need to adapt their production continuously.”

How they work
Robotiq makes two versions of its standard 2-Finger products as well as a 3-Finger universal Adaptive Robot Gripper. All of the grippers ensure that both the grip is correct and that the object continues to be held — intelligent gripping if you will, notes Bouchard. The feedback system for gripping pressure and detecting object presence employs a combination of motor current monitoring and encoder data.

In addition, the grippers are electric, which means cycle times can be slashed compared to situations where other grippers are used, according to Bouchard. He says this is because electric grippers only open and close as much as needed, unlike pneumatic grippers which operate only from fully open to fully closed. The electric aspect also allows adjustment of speed, force and finger position.

“So, our grippers give more options to the computation software by being able to pick a part from different orientations,” Bouchard notes. “This is a very important aspect in making efficient unstructured picking [bin picking] a reality.”

Case studies
Before we look at two companies where Robotiq grippers have helped boost automated manufacturing speed and efficiency, let’s check in on the typical scenario. “Usually companies who go with our grippers install it on a robot for a new cell,” says Bouchard. “Considering the high frequency of changeovers and the high mix of parts, it would be impossible to have an adequate ROI for their robotic cell using the traditional custom tooling approach. Said another way, the use of a flexible Robotiq gripper really leverages the flexibility of the whole cell and makes it really worthwhile.”

Genesis Systems Group, a firm that specializes in the integration of robotic cells, needed a solution for an aerospace customer with a machine-tending task where different parts were being produced with an Okuma double spindle lathe. One of the goals was to run the system unattended for the shift — lights-out manufacturing — and a big challenge was the wide range of parts that needed to be produced, parts from less than 1 in. to 6 in. in diameter.

Another major challenge was the fragility of some of the finished parts. The feeding gripper needed to be able to pick up blocks weighing as much as 25 lb., but the finished parts could deform with as little as 2 lb. of gripper force and be easily scratched. A gripper that could handle both challenges would be ideal. Genesis designed a series of fingers resident on one Robotiq gripper, with some fingers being used for loading and some for unloading tasks — allowing a single gripper to do everything with no changeover required. The finger position and force could be selected by the robot and automatically controlled during the cycle. While the initial cost of this complex gripper was high, it was quickly offset by the reduction in tool changer complexity that would have otherwise been required, says Bouchard, adding that it also provides Genesis with great flexibility for future tasks.

Inertia Switch is another manufacturer that recently chose a Robotiq solution. The firm produces many types of switches for aerospace, mechanical and electrical products. Bouchard notes that at the time Inertia started to automate the process in question, they decided to create a conventional work cell that is fully guarded and cannot be easily reprogrammed. “The grippers they had were pneumatic and limited to a few parts, and since Inertia Switch makes over 1,000 different parts, they needed a more flexible solution to optimize their machine tending production process,” he notes. “Optimizing this process also meant that any machinist should be able to easily manage the robot system and the gripper with minimum setup time.”

Inertia chose the Robotiq 2-Finger Adaptive Gripper because it was the only solution that fits with most of their parts. Bouchard says ROI was achieved in less than a year and provides new application opportunities going forward.

After the installation, Slobodan Todoric, a machinist and programmer at Inertia Switch, described the gripper as a “game changer.”

“The gripper is very flexible, it can pick up the small parts that we make at Inertia… it’s flexible. You can grab on to many different surfaces, round, square, whatever you want. It’s durable.” Todoric continues, “We got the software and we just loaded it up on the universal robot and it started working and it’s perfect, just plug and play.”

Although Bouchard and his team have accomplished a great deal and taken manufacturing automation to the next level, he believes we have only begun to see what robots can do on assembly lines and beyond. “For many years, we have moved so much information into the digital world, and now robots can use this information and act back on the tangible world. There are very exciting things to come.”

This article was previously published in the November/December 2015 issue of Manufacturing AUTOMATION.