The HAHN Group has expanded its management team with the appointment of three new members.

Jörg Kilb is chief operations officer (COO) of HAHN Automation, focusing on the further integration of international subsidiaries and increasing efficiency in processes and systems.

Kilb started his career at HAHN Automation GmbH in Rheinböllen following his studies at TU Kaiserslautern, Germany. After working as an assistant to the management and member of the organizational development, he was among others involved as branch manager in the operational management of the company.

As chief revenue officer (CRO) of HAHN Automation, Philipp Klaschka is responsible for the customer-oriented functions of sales, service and project management. 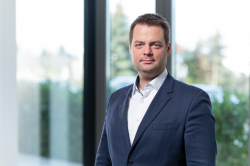 Before joining HAHN Automation, Klaschka worked for companies such as Festo AG, Deloitte Consulting and Norma Group and spent three years of his career in Asia and 11 years in the United States. There, he was responsible for the successful establishment of the company’s China subsidiary before being appointed the current CEO of the U.S. subsidiary HAHN Automation, Inc.

He will continue to work in this role until a successor is appointed.

Klib and Klaschka support Frank Konrad, who remains CEO of the Germany-based HAHN Automation and drives the company’s strategic decisions and developments in machine manufacturing, with its well over 800 employees at eleven locations in eight countries.

Lastly, Axel Greschitz is the new CFO of the HAHN Group.

In his new role as CFO, Greschitz brings extensive experience in the areas of controlling, accounting, project development and financing.

Greschitz graduated with an MBA from the University of Graz. He then started his career in various positions in accounting and controlling, with early experience in the entire DACH region. He has held roles at AE&E Austria GmbH & Co KG, AE&E Inova Holding AG and Hitachi Zosen Inova AG.