Features Communications & Networks
The need for wireless monitoring – An overview

There is a real on-going need for monitoring of valve positions (actuated or manual) in the process line. Malfunctioning of a valve can result in danger to human health and safety, affect yields and generate environmental risks. In some industries, regulation requires constant recording of valve position. Currently, such monitoring is done through wired “switch boxes.” Each such device requires data transmission and power cabling. Not only are these cables costly to manufacture and install, they are also one of the most frequent sources of failures in the process line, due to the fact that they are very often exposed to harsh environmental conditions. In fact, it is right here, at the field device level, where the majority of problems with wires really exist.

The various field buses that have been integrated into most applications over the past years ago have not really changed the situation. The Switch Boxes are still typically connected via wires, in a star topology, to bus concentrators. 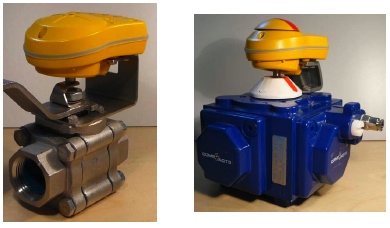 Lower Costs. The costs associated with installing, maintaining, troubleshooting, and upgrading wiring have escalated while costs of wireless technology maintenance continue to drop – particularly in the areas of installation and maintenance. A market study by the Venture Development Corporation found that users of wireless technology cite lower cost as a major reason for adoption.

Installation. Wireless valves monitoring systems could ultimately eliminate tens of thousands of feet of wiring in the average industrial site. Deploying such wiring can cost $50 to $200 per foot . Specialized wiring for harsh environments can cost as much as $2,000 per foot.

Existing Wireless Standards
The ISA  has established the standards committee on wireless systems for automation (ISA-100) and recently released the first draft (ISA-S100.11a) of the Wireless Network Optimized for Industrial Monitoring. The Wireless Hart protocol was recently released, and related products have started to appear on the market. The ZigBee protocol, which is very close to the ISA100 and Wireless Hart standards, has been available for some time and is supported by many chip and solution vendors and has the added advantage of being very cost-effective. The ZigBee technology is broadly utilized in building automation and energy control devices which are also used in the process industry.

All three protocols are based on IEEE 802.15.4 standard and have a lot of common. 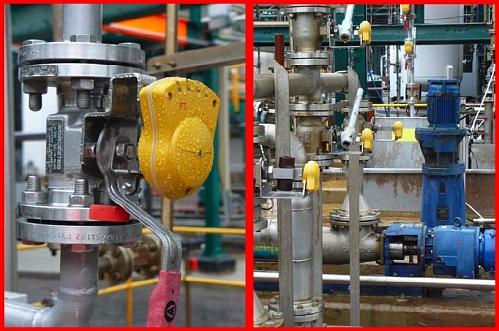 Industrial users (pharmaceutical, petroleum, water, etc.) have expressed the need for more monitoring capabilities on the manual and actuated industrial valves they operate in their process lines. This will increase line safety, ensure compliance to regulations, improve yield, decrease operating line costs, provide better compliance to environmental requirements, etc. The option of installing a wired monitoring device on the manual or actuated valve is not practical due to the cost of wiring installation (US$50 to US$200 per foot) which can exceed US$5,000 per value, and a process plant can have thousands of industrial valves. A wireless valve monitoring solution can cost a fraction of this (10 percent). The cost of a wired valve monitoring system with 5,000 valves can reach the prohibitive amount of US$25,000,000 while setting up a wireless system will run at about US$2,500,000.

Wireless technology comes with its own set of challenges – propagation, interference, security, regulations, and other issues. Some control applications can afford the cost of adding a high-end wireless communication system such as cellular phones, WiFi, WiMax and so on. Nevertheless, the required wireless application will benefit if the technology is relatively low cost, is reliable, and robust, and it is standards compliance in order to drive interoperability among manufacturers and provide direct benefit to the end users.

The ZigBee Technology
The ZigBee technology is widely available and can be found in very cost-attractive industrial monitoring and control solutions. Many end users are considering using the ZigBee technology in their process line for simple monitoring applications and for energy management and automated infrastructures. The ZigBee wireless network is robust and reliable, low-cost, with a very low power consumption. It allows utilizing a valve monitoring solution powered by two small ½ AA Lithium batteries which last for more than 5 years assuming a 30-minute update rate, and with less than 100 ms latency.

The relatively low data rate (0.25 Mbps) achieved with a ZigBee network is adequate for valve monitoring requirements. The ultra low power consumption and the low cost features of ZigBee make this technology the best choice for valve monitoring applications. To achieve the goal of low total product cost as well as long battery life, the ZigBee / 802.15.4 protocol provides reasonable trade-offs in several performance metrics. To control the administrative costs of both the implementer and the user, ZigBee devices employ unlicensed radio bands. The ZigBee device is designed to be relatively short range without infrastructure. When increased range is necessary, the ZigBee infrastructure utilizes Mesh network topology.

To allow interoperability between ISA100 wireless solutions and ZigBee-based products, the ISA100 standard committee has established a Working Group which has been commissioned to provide a solution to allow seamless integration of ZigBee devices and ISA100-based networks. The ISA100 ZigBee Working Group mission is to provide guidance to end users, suppliers, and regulators to integrate ZigBee devices with an ISA100-based wireless network. The ISA100 ZigBee Working Group will focus on:

• Evaluating the feasibility of such integration and the potential impact on security, reliability, manageability, and performance
• Evaluating various methods using the ISA100 standards to integrate ZigBee devices.
• Coordinating with the ZigBee Alliance using the IP policy of ISA.

The result of this work will be an informative document (technical report) describing the methods and issues associated with this integration.

This ISA100 ZigBee Working Group is expected to release its documents in mid-2010.

The wireless valve monitoring device can be installed on valve actuators (NAMUR interface) or on manual valves (ISO 5211 Interface). The small battery powered valve device (VD) can be installed on existing or new valve actuators or manual valves. The VD can operate for at least 5 years on one battery, which is field replaceable. A network of routers are spread around the plant and use mesh technology in order to transfer the received VD messages to the System’s TCP/IP-based Gateways. The Gateway transmits the valve data to the plant management system, using an OPC protocol, or any other standard communication protocol.

The valve data can be pushed to process line PLCs to allow incorporating valve data into the process operation. 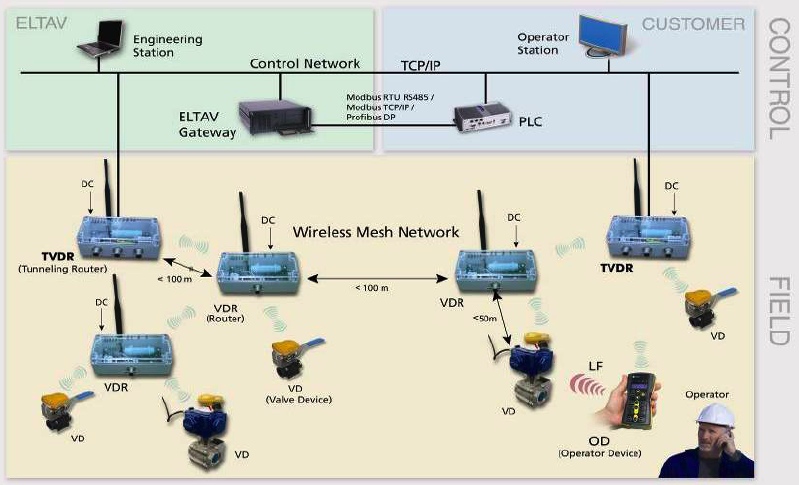 The VD provides information about open or closed states of the valve, and also measures the valve’s angle position in degrees, at ±0.500 accuracy with 0.100  resolution. It also provides its temperature, battery status and other house-keeping information. The VD has inputs to collect data from the field (analog and digital) and outputs to deliver commands to field devices (planned enhancement). It collects the dynamics-of-state change of an actuated valve and transmits it as a data packet, thus providing preventive data on the health of the actuator/valve set. The operation of the VD can be commissioned and programmed from the system server as well as from a handheld operator device, which allows short-range, low frequency communication with the VD.

The current product utilizes a Zigbee chip set from Ember. However, once the ISA100 standard is released and a stack is commercially available, the product will be upgraded to the new ISA-S100 standard. Eltav plans to carry both ZigBee and ISA100 based products.

The system is designed to maximize the probability of message transfer from the Valve Device to the Management System. In preliminary pilot tests, a 100% data transfer has been demonstrated (460,000 messages with no losses and with less than 0.1% retries or rejoins). The measured average latency was less than 100 ms.

Eltav was awarded the 2009 ISA Silver award for innovation for this product.

ZigBee is using Direct Sequence Spread Spectrum (DSSS). This technique increases the bandwidth of the transmitted signal. The wideband technique provides improved communication qualities but usually sacrifice spectrum utilization. DSSS can be modeled by applying a prearranged pseudo-random digital sequence to directly phase-modulate the already data modulated carrier, at a rate in excess of the data rate. The resulting DSSS signal occupies a much greater bandwidth, albeit with a lower spectral power density. The signal is recovered by demodulating the received signal with a replica of the same modulating pseudo-random digital sequence. The DSSS signal process spreads the original signal into a wider bandwidth for transmission over the channel, and then dispreads the signal at the receiver to recover the original signal and the information it contained.

For more information, contact israel.radomsky@eltav.com. Content modified by a white paper. Radomsky is one of the founders and the CEO of Eltav Wireless Monitoring Ltd. He was the founder of ELPAS which provides indoor location based (RTLS) asset management solutions. He previously was with IMI in Israel, a company dealing with guided and homed missiles. He is a retired LTC who dealt with intelligent systems. He was twice awarded the Israel Defense Award. He was a member of ANSI371 standard committee, a member of ISA100 Wireless standard committee and he holds 10 patents.