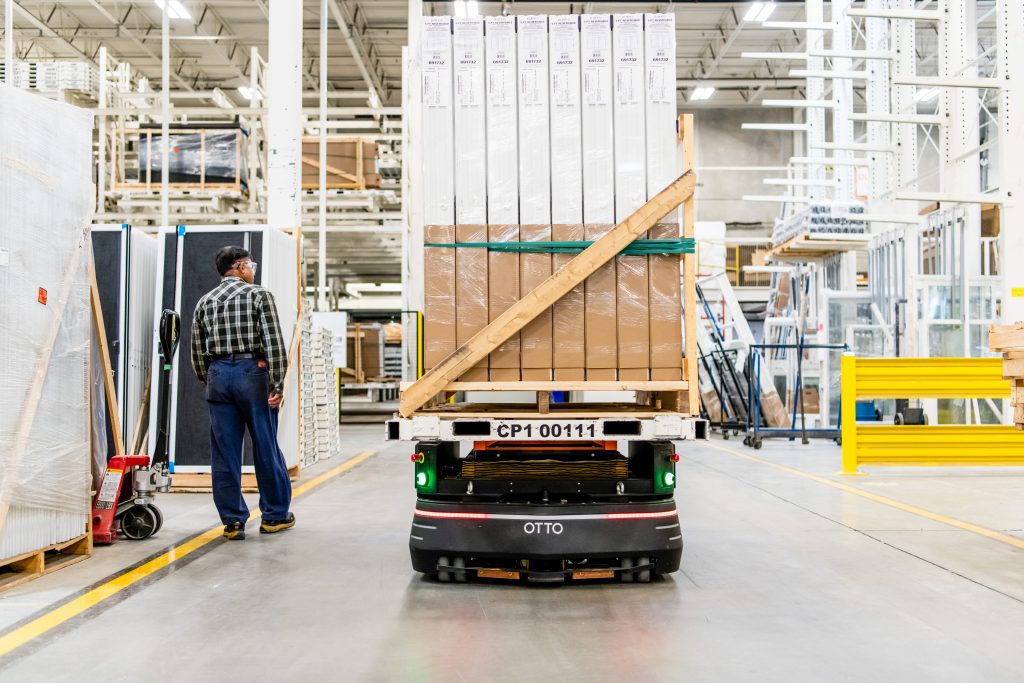 The OTTO vehicle uses AI and onboard sensors to adapt to its environment in real time. Photo: OTTO Motors
Advertisement

Over the past five years, Toronto-area manufacturer Sunview Patio Doors has transitioned its factory from a manual, paper-driven operation to one that’s fully automated.

The company, which produces about 80,000 windows and doors every year, is bringing its operations into the Industry 4.0 era in response to increasing customization options and higher customer demand for faster delivery times.

So far, Sunview has implemented automation such as robotic work cells, an automated storage and retrieval system in the warehouse, and enterprise-wide software that integrates plant operations.

Two years ago, Sunview was looking to replace its traditional tow motors in order to reduce traffic on the shop floor, and purchased its first autonomous mobile robot (AMR) from the Clearpath Robotics–owned OTTO Motors.

Sunview worked with a robot integrator to implement OTTO at the end of its first production line. Once a patio door comes off the line, an operator sends a signal and OTTO will bring over the next empty pallet.

The operator will then load the pallet, and OTTO will deliver the finished goods to the warehouse storage system, where the vehicle will wait to be called again back to the production line.

Kurt Oberparleiter, vice-president of operations at Sunview Patio Doors, says his company called on OTTO Motors to test its AMR ahead of a full-scale plan to eventually replace all of Sunview’s tow motors with autonomous vehicles. He says Sunview’s existing tow motors are frequently damaged when operators inadvertently bump into objects on the spatially challenged factory floor, and they’re also a safety concern for people moving throughout the facility.

When the Sunview team initially researched solutions for material movement, they considered traditional automated guided vehicles (AGV) that use magnetic tape or lasers. “We were worried because those AGVs are easy to defeat,” he says. “If someone moves a garbage can, or there’s some debris on the floor, or if someone walks in front of it, some of those AGVs will require a reset.”

Onboard sensors and software learn and understand the working environment and adapt to changes in real time, detecting people, obstacles and equipment along the way.

“OTTO is our best driver in the factory right now. It doesn’t run into anything, it shows up for work on time, it doesn’t complain. It does what’s required,” says Oberparleiter, who says he’s been most impressed with the safety performance of the vehicle. “That really surprised me.”

The main driver behind the initial implementation, however, was cost. Oberparleiter says that AMRs are less expensive to maintain in the long run because they don’t require the regular propane top-ups and servicing that traditional tow motors do. AMRs also eliminate the need for human drivers, who can be freed up for more challenging and complex tasks.

“We face the common problems that the Toronto market has today in that it’s difficult to get skilled workers,” says Oberparleiter. “It’s hard to get people to come to work – and that’s great. It’s great for the economy; it’s great for people.

“It’s a little bit tough when you’re trying to run a factory and you need everybody to show up every day.”

Rick Baker, chief revenue officer at OTTO Motors, says that the company has spent considerable effort over the past few years learning its customers’ needs.

“For some of our customers, it’s about reducing labour. For some, it’s really about safety, and preventing any potential for impact against another human,” he says.

“Understanding that unique case about what’s driving them to adopt technology was really important, and then optimizing our system to be able to meet those demands.”

OTTO Motors is continually updating its software to ensure maximum reliability, and, since first debuting its self-driving vehicles on the market in 2016, has focused on growth in North America, Europe, Japan and New Zealand, as well as on developing partnerships to offer tools and assemblies that fit atop the OTTO.

One of those most recent partnerships is with U.S.-based Boston Dynamics’ logistics robot, Handle, which uses a vision system to pick boxes and pallets and place them on top of the OTTO vehicle.

“I’m glad that we’re doing this legwork to get our factory to where it needs to be in terms of what the future will bring.”

There will be more comprehensive applications to come, says Baker, “where we’re a part of their overall portfolio. What you’ll see from the go-to-market strategy moving forward is doubling down our efforts to bring scale and leveraging [those partnerships] in market, because we have proven technology that we have spent a lot of time developing for reliability, safety and impact.”

He says that gaining insights from the data collected by OTTO’s AI and fleet management systems is an area of continuous improvement for the company.

“Putting data in context really is where the power lies for the customer,” says Baker. “Our goal is ultimately to give them data about their facility that helps them proactively plan.

“Everyone knows that we can move stuff,” he continues. “The question is, when we move it, how do we move it to optimize for efficiency, ROI, labour, safety – it’s the combination of this that is actually most meaningful. And so the conversations are turning from is this technically feasible to what’s the potential business outcome.”

Sunview Patio Doors was able to reach its ROI in about 16 months with its first OTTO robot. Oberparleiter says the company is finishing some other projects over the next couple of years but after that, Sunview plans to replace its entire tow motor fleet with OTTO’s mobile robots.

He says manufacturers looking to implement an AMR may need to be prepared to modify the layout of their factory to optimize the robot’s paths, and to allow it to learn its environment.

“It feels to me like this is the future,” Oberparleiter says. “The age of tow motors and people driving cars and machines inside factories – any kind of vehicle inside a factory – those days are starting to disappear. And I’m glad that we’re doing this legwork to get our factory to where it needs to be in terms of what the future will bring. We need to stay competitive.”