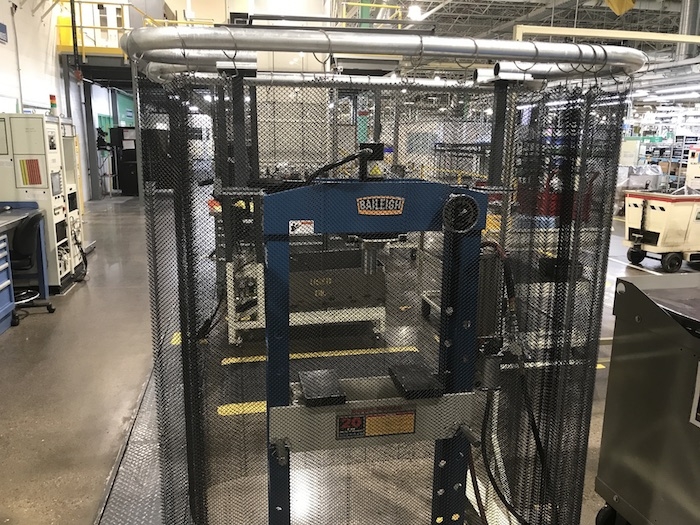 Toyota Motor Manufacturing is a 1.9 million-square-foot facility and the company’s only plant in North America that manufactures both engines and transmissions. It opened in 1996 and employed approximately 300 people that first year – and the location has grown to employ more than 1,600 Toyota team members currently.

The factory is responsible for manufacturing V4 and V6 engines and eight-speed transmissions for Toyota vehicle models including Avalon, Corolla, Camry, Highlander and Sienna, as well as the Lexus RX 350. The facility uses the Baileigh Shop Press HSP-20A – an industrial-grade hydraulic pneumatic press with a 20-ton capacity – to press gears and other components into place during motor manufacturing. Each Baileigh press is equipped with a GuardianCoil press guard system, which Cascade Safety and Security says is ideal for maintaining visibility while providing a flexible, protective barrier between operator and machine.

“Our chief concern is the safety of our employees,” says Travis Stollings, safety specialist at Toyota Motor Manufacturing, in a release. “We needed a product that would eliminate the threat of metal ejecting from the point of operation in our hydraulic presses.”

Cascade Safety and Security offers three lines of industrial safety systems, including pre-engineered press guard kits, custom press guards, and other customizable GuardianCoil systems for specialty applications and large-sized machinery. Each is equipped with fireproof GuardianCoil fabric in one of two variations – standard or heavy-duty – and is compliant with the OSHA requirements to prevent injuries from projectiles, specifically ANSI B11.19-2003 regarding point-of-operation safeguarding.

Toyota Motor Manufacturing’s press guards were installed in May 2019.