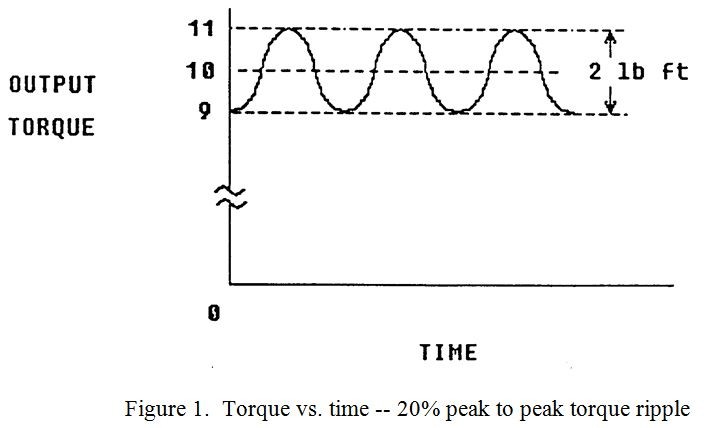 Torque ripple must be defined as a function of output load and speed. For load specification the most sensible rating point is the continuous duty thermal torque rating for the servo motor. At this point, the magnetic circuit of the motor is loaded sufficiently by the stator excitation which will bring out the worst case iron saturation effects within the continuous duty zone. Thus, a realistic picture of the torque ripple characteristics of the motor is obtained.

The speed at which torque ripple data is taken is determined by bandwidth of the servo system and frequencies of major components of torque ripple. The speed must be low enough such that system inertia does not damp out torque variations. Also, the speed should be high enough such that certain ripple frequencies are near the bandwidth of the system. A reasonable speed which meets these criteria and offers easy conversion of frequencies to cycles per motor revolution is 60 rpm. All test data presented is taken at this speed.

In summary, torque or velocity loop servo mode of operation must first be determined. Tests can then be run at 60 rpm under the appropriate servo mode.

Typical torque ripple measurement hardware consists of a servo motor directly coupled to a torque transducer which in turn is directly coupled to a loading device. Various load methods have been used such as eddy current brakes and dc generators. However, few devices work as well at low speeds as a prony friction brake. The prony brake consists of a hollow drum, partially filled with cooling water, over which a friction belt rides. The tension of the belt determines the torque loading.

Torque ripple is not only difficult to measure, but it is also sometimes ambiguous to specify. Preferably, torque ripple tests should be run at application speeds and loads. However, these parameters are very often not available, and therefore, some common rating baseline against which systems can be compared must be established.

Warren Osak is the CEO and founder of Electromate.

This white paper has been published with permission from Electromate.