Esben Østergaard, founder of Universal Robots, describes how accessibility is helping his company pave the way to Industry 5.0 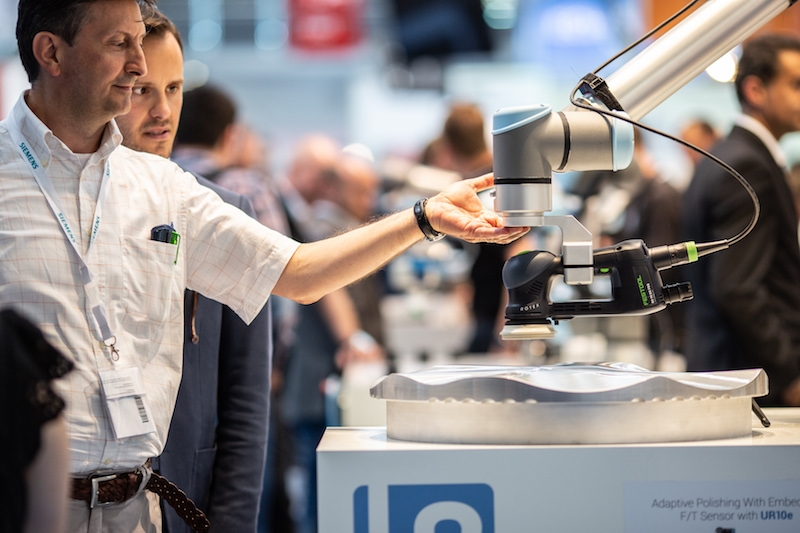 January 23, 2019 – Universal Robots has had a big year. After creating the world’s first collaborative robot (cobot) arm a decade ago, the Danish manufacturer remains the biggest player in the industry with 60 per cent of the market share.

In September 2018, the company sold its 25,000th cobot – and, to mark the occasion, awarded the purchaser, Kay Manufacturing in Chicago, with a special gold-painted edition. And at the International Manufacturing Technology Show (IMTS), also in September, Universal Robots debuted the e-Series, its new flagship line of cobots.

“The e-Series is the evolution – hence the e – of what a collaborative robot is,” says Esben Østergaard, founder and chief technology officer of Universal Robots (UR). “It looks more or less like the robots we’ve had on the market for five or 10 years, but there are a lot of details that we’ve improved. If you know the robots well and you know the market well, those are actually not small things.”

Among the chief differences of the new UR3e, UR5e and UR10e models is a built-in tool-centric force/torque sensor for applications that need force feedback for consistent results, such as sanding, buffing, polishing and deburring. The force/torque sensor can measure mass, perform inspection processes or detect contact, with increased repeatability of 30 to 50 microns (0.03 to 0.05 mm), depending on the model, for precise tasks such as finishing and assembly.

Each model includes a responsive, widescreen teach pendant, with drag-and-drop features that make programming the cobot straightforward for all plant workers regardless of skill level. Advanced users can use a 500Hz system bus to add more complex motion control algorithms to their programs.

There’s also the new application builder, which takes customers through the entire process of building a robot application, from configuration through to cost. The application builder “is another approach to make automation accessible and democratized,” says Østergaard. “That’s kind of where our collaborative robots have hit something completely new – we take the operator seriously. We believe that the people working on the factory floor are craftsmen that know their processes and know their materials.”

Giving workers a greater sense of autonomy is ultimately beneficial to manufacturers, says Østergaard. “What we’re doing is to try to move people away from working like robots to working on robots.”

To do that, UR runs the Academy, a free, 87-minute online learning module available in eight languages to train anyone – from a plant employee to the general public – to become robot programmers. More than 40,000 people have taken the course to date. The company also offers Universal Robots+, a user-friendly online portal that brings together in one place all of the UR-approved end-of-arm tooling and technology options available from third parties.

Recognizing humans and robots as complementary rather than competitors is a relatively new concept, says Østergaard. “The old paradigm in manufacturing was this lights-out type of thinking, where people think, ‘If we have fully automated factories, then we don’t need people anymore. We can just spit out parts and it will be great.’”

But that led to manufacturing lines comprised of manual and automated systems that put the cost per part produced at the forefront. “The people in these lines work like machines,” he points out. “They are basically instructed what to do – they get how many units per hour or per day that they have to produce.”

Bringing cobots onto the line brings together the best of both worlds, Østergaard says – they free up people to do more complex jobs, and they allow for more consistency while maintaining the flexibility of manual production.

“We call that Industry 5.0 – this other way of thinking where it’s all about the humans on the factory floor,” he says. “We want the factory floor to become a positive place to work, because that’s what’s really created all the value that we have in the world today. Since the first industrial revolution, the factories have been the main driver of value creation. Our role must enable that value creation to happen.”

Amid recent shakeups in the robotics industry, including the sudden closure of competitor Rethink Robotics, Østergaard says the key is to be innovating constantly. He notes that the early days of UR were all about educating manufacturers on what a cobot is and what it can do for their plants, and the launch of the e-Series came at a time when the market was ready for more.

“We don’t believe we can be the only player in this space and we shouldn’t be, either,” he says. “We should encourage competition and have more players to make it a legitimate category for robots. For us, it’s all about pressing down the pedal.”