Sherman Lang doesn’t need to imagine what the factory of the future will look like. He gets to see it on a daily basis. As group leader of the Integrated Manufacturing Technologies Institute’s (IMTI) Reconfigurable Manufacturing group, Lang and his colleagues are performing cutting-edge research that is bringing the factory of the future to manufacturers’ computer screens. The plant of the future, he says, employs virtual reality to plan and design products and processes, all with the click of a few buttons.

In simple terms, virtual reality is an artificial environment simulated by a computer. It is the same technology that is explored in Hollywood movies like The Matrix, and used in the making of video games. But it is not something that is typically associated with the manufacturing industry. The National Research Council’s IMTI is trying to change this.

The London, Ont.-based facility is using the brainpower of more than 100 researchers, post-doctorate fellows, graduate students and post-graduate students to perform innovative research aimed at keeping Canada competitive and leading manufacturers into the future. Virtual reality, or “virtual manufacturing,” is one of the research sectors.

“Virtual manufacturing is the concept of doing as much as possible in the virtual world before committing to capital investment,” says Lang. “This allows all aspects of manufacturing to be simulated and optimized before actual production begins.”

Virtual and Reconfigurable Manufacturing Technologies is one of IMTI’s main research groups. It focuses on concurrent engineering, reconfigurable manufacturing, and modelling and simulation.

The following is a snapshot of some of the cutting-edge research and development taking place within the walls of the 65,000-sq.ft. facility. 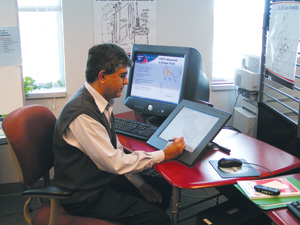 The sketch-based design tool is being developed to accelerate the design process and reduce product development costs, while allowing the user to express creative ideas freely.

The technology allows each manufacturing resource to handle the schedule of its machine, operator or robot locally. It also allows them to work together through a negotiation mechanism and protocol.

“The technology is expected to fill a major gap in the manufacturing software industry to address real-time scheduling issues,” says Weiming Shen, the group’s senior research officer. “It allows manufacturing enterprises to respond to customer requests quickly to win the increasingly competitive market, and respond to changes in the shop floor quickly to increase productivity through optimizing the equipment utilization.”

The team is also working on a sketch-based design tool that allows the user to draw a design on a tablet PC, and then convert the freehand sketches to a two-dimensional (2D) line drawing with the push of a button. The 2D drawing can be manipulated, and then converted to a 3D computer-aided design (CAD) model.

The technology is intended to accelerate the design process and reduce product development costs, while allowing the user to express creative ideas freely. This could be used to design equipment and parts for machines.

Another concurrent engineering project deals with the automatic assembly of microsystems. Electrostatic forces are a challenge in micro assembly because of the small parts involved. The parts are also very fragile and need to be handled with care. Current industry practice is to do this assembly under a microscope using hands and tweezers. The rejection rate using this method is very high, however, since microcomponents are easily damaged. To overcome this challenge, the group is developing a flexible automatic system to perform the assembly of a variety of micro devices. It is working on a virtual reality interface that will allow users to model, simulate and validate handling methods for microcomponents. Simulations will allow users to test multiple scenarios for different assembly task sequencing, gripping and microcomponent mating strategies, as if they were dealing with the actual system. It will enable them to simulate the assembly process offline and visualize the outcomes before performing the assembly in a live environment.

Modelling and simulation
This group’s research is focused on how to properly model the joining of modern materials through joining process simulation. The group believes simulation will be faster, cheaper and more flexible than today’s typical trial and error and experimental testing methods.

The group is also working on a machine simulator based on reconfigurable dynamics simulation technology, which will allow users to rapidly build and modify virtual machines. The goal is to develop software that will allow a machine to be reconfigured to carry out various functions, rather than requiring several machines.

In the past, simulators have typically only been able to simulate one machine or system. Using reconfigurable dynamics, the team is developing a generic machine simulator, so that numerous machines can be simulated. The system will allow users to test a new production design on a machine virtually before deploying the process on the plant floor. It allows the user to explore different design options before settling on the appropriate one.

The monitor on the left shows a standard operator panel for operating a modular machine system as a five-axis machine tool. The monitor on the right shows a web-based interface for remotely controlling, monitoring and programming the system. The virtual model of the combined tripod-gantry-table system is rendered in 3D in a web browser, and animated with real-time motion data of the actual machine, so that an operator or programmer can remotely view the real-time status of the machine with a standard web browser. In the browser, the actual motion and operation of the tripod-gantry-table system is combined with virtual machines in a cell to plan configurations and tasks.

This group is working on reconfigurable dynamics, which deals with modelling the motion and forces in machines that are reconfigurable. Its research focuses on a method of modelling that automates and eliminates the need to go through a lengthy process to derive a new model when a structure is changed.

The project is designed to address the problems of designing modular machines, which include how to decompose machines into modules for manufacturing a class of products, and how to rapidly physically reconfigure modules into new machine systems. The researchers are developing methodologies and technologies to align, calibrate, integrate and reprogram reconfigured machines and their control systems. New technologies, such as laser trackers and other sensors, will allow machine modules to be designed where the locating and alignment functions are separated from the holding, attachment and clamping functions, explains Sherman Lang. “This will allow a greater variety of module designs to be realized, and predefined models and parameters will not need to be pre-loaded into machine controllers.”

The team is also working on the automated programming of robots. The first application it is exploring is painting. The goal is to generate painting programs for arbitrarily complex product shapes, without having to embed heuristic knowledge in the system. When that is achieved, the cost to paint parts will not depend on the number of parts painted, but only on the part complexity, says Lang.

Another goal is to integrate sensor data into the CAD models before generating the painting programs, to account for differences in various products. The methodologies and algorithms being developed will also be useful for other applications where a surface needs to be completely covered, coated or inspected by a robot, says Lang.

Virtual Environment Technologies Centre
The Virtual Environment Technologies Centre (VETC), a national, industry-driven centre dedicated to fostering the adoption of advanced visualization technologies by the manufacturing industry, has been a fixture at IMTI since 1999. The centre houses a research and development facility for industrial solutions; an application and solutions centre; a training, support and education centre; and a technology showcase. Its mandate is to make virtual reality technologies available to Canadian industries, giving them access to cutting-edge technologies that they wouldn’t otherwise have access to. 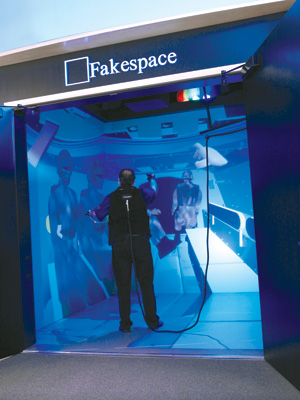 IMTI’s Virtual Environment Technologies Centre (VETC) is equipped with a “Cave,” which allows users to test different scenarios in a 3D environment. In this photo, Niall Murray, senior systems administrator, is in the Cave, working in an immersive environment model of a light armoured vehicle. He is manipulating objects and re-arranging virtual soldiers to assess potential problems with the interior design and layout.

It is equipped with a “Cave,” which allows users to test different scenarios in a 3D environment. The Cave is the group’s most sophisticated environment, where the 3D model is fully immersed on three walls and the floor, so that the user gets a true sense of being inside the model. This approach can be used to simulate operations on the plant floor.

“Any operation that you can do in the real world, you can simulate in the virtual world to see if it will work, and you can make changes to it before you commit to building it the way that you originally thought,” says Ellie Withers, operations manager at the facility.

In another room at the centre, images can be projected on a large, flat 24-ft by eight-foot glass screen. By projecting the image on such a large screen, users are able to identify design flaws before manufacturing the product or machine. This visualization system can load large 3D datasets and interact with them. The VETC is also home to a 64 processor cluster that can be used to pre-process vast amounts of simulation data. The solution can then be sent to the visualization system for display. 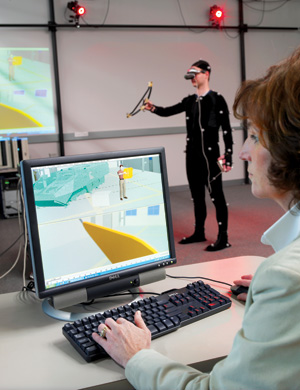 Manufacturers can be trained on a specific technique or machine at the centre without having to use valuable plant resources. This simulation is achieved by attaching reflective markers to a person performing a task. Infrared cameras detect these reflectors and relay data to the computer. The movements of the markers are attached to computerized bone segments that reflect the functional elements of the human body. The markers drive the computer skeleton the way muscles drive the human skeleton. The resulting model can be used to analyze the subject’s motions during a task.

This system can also be connected to ergonomic software, and be used to assess whether the person is performing a task in such a way that can lead to injury.

The same techniques can be used to physically simulate a process.

“Rather than sitting in front of a computer screen with a CAD system and figuring out how some assemblies should be made or put together,” says Lang, “you can go through the motions in the virtual world physically, and determine whether or not it’s feasible to do, or whether there’s a better process. You can try out different processes virtually, very quickly.”

The centre also has a reconfigurable simulator, which is used to simulate the operation of a machine, and is designed to act as a training tool. Currently, the simulator is set to replicate the operation of a mobile crane. This is used to train crane operators, and allows the instructor to give better feedback because the instructor can look at what the person is doing from any angle or viewpoint.

Into the future
Judging by the research underway at IMTI, virtual manufacturing will soon be a reality for Canadian manufacturers.

“What we’re trying to do,” says Gian Vascotto, director of Virtual and Reconfigurable Manufacturing Technologies, “is to reduce the cost of making a commitment by simulating as much as possible the process from idea to delivery, so that when you make a decision, you’re not taking a high risk, and you don’t have to invest time and equipment when you don’t know if it’s going to work.”

It is this type of cutting-edge research and development that will help Canada’s manufacturing industry remain competitive in the global marketplace.

For more information on the research and development taking place at IMTI, visit imti.nrc.gc.ca.