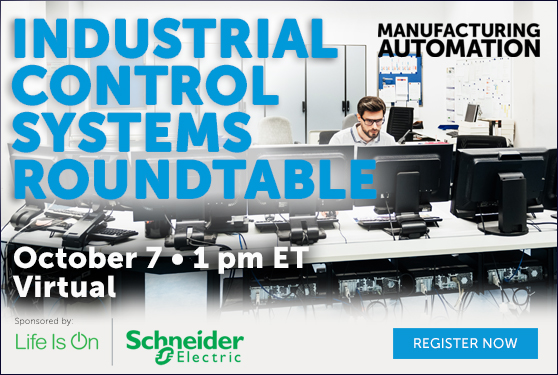 This roundtable, brought to you by Schneider Electric, assists owners and operators in their journey to Industry 4.0 by bringing together senior-level industry experts in a panel discussion about the role of industrial control systems (ICS), how they can help to automate processes, their cost effectiveness and their ROI.

Industrial control systems are one of the biggest investments a manufacturer can make. If you’re using a legacy industrial control system (SCADA, MES, ERP, etc.) that’s nearing the end of its lifecycle, or you’re wondering about how Industry 4.0–enabled solutions fit in relation to your existing control software and operations management, or you’re thinking about how to stay competitive in the post-COVID era, you won’t want to miss the insights from this roundtable.


Topics include: Creating a strategy to upgrade ICS, integration from network and device levels, legacy systems, requirements for CapEx, ROI


Topics include: Centralized vs. modular data collection, the IIoT’s role in data transmission, edge and cloud computer and where they live in the ICS architecture, digital twins


Topics include: Threats to the IT and OT networks and the role of ICS, safety communications, threat modelling, building a cybersecurity plan

John has 25-plus years of experience in industrial automation and control systems. After acquiring a bachelor’s degree in electrical engineering from the University of Delaware, John began his career working as a control system engineer in the potable water industry. Subsequently, John worked as an application engineer for a system integrator who primarily focuses on the pharmaceutical and biotech industries. He joined Invensys Wonderware in April 2000 as a senior application developer in the product marketing department. Shortly thereafter, John assumed the role of product marketing’s functional manager of infrastructure. He spent five years as a domain architect with responsibilities for architectural and functional definition of InTouch and ArchestrA technologies. For the past 10 years, John has served in multiple product management roles for AVEVA HMI/supervisory control products.

Sanjith is vice-president, industrial automation at Schneider Electric Canada and has spent over 19 years in the energy and automation solutions industry. Sanjith has vast experience in designing electrical control systems and automated solutions, as well as hands on experience in programming PLCs, VFDs, SCADA systems and more. A qualified electrical engineer with a master’s degree in business administration, Sanjith started his career in electrical projects in 2002 with Aberdare Cables in Johannesburg. In 2005, he joined Emerson Automation Solutions as electrical design engineer. He joined the sales organization as systems sales engineer in 2008. Sanjith went on to lead sales for Emerson’s industrial automation division as director of sales for central and southern Africa (2011-2015) and regional director for Canada (2015-2017). After an acquisition, Sanjith joined Nidec Motor Corporation as director, sales and marketing for Nidec Merkle-Korff (a division of Nidec Motion Control). In this role, Sanjith and was responsible for all commercial aspects of the business and sales globally. He joined Schneider Electric in March 2020.

As president and founder of RTS, Vic is instrumental in setting company vision and direction to maintain a technology leadership position in the industrial systems integration and manufacturing execution solutions space. To that point, RTS has been SAP’s Shop Floor MES Partner since 2007 and is fully vested in cobots, AGV, IIoT, big data and AI to drive true manufacturing digital transformation. His intense focus and passion on delivering solutions to achieve manufacturing operational excellence through production data analysis and actionable intelligence has been a game-changer for many of RTS’s clients. Vic founded Real Time Systems Inc. (RTS), RTS Consulting Automation in 1992.

Christian has worked in automation and technology for more than 20 years. A graduate in aeronautics, he began his career in 1995 and he obtained his master’s in business administration in 2003. After having worked for different companies, he founded PCI in 2001. With his team, he carried out several mandates for clienteles local and international based on the values of respect, collaboration and excellence. He loves sharing his knowledge and helping the future generation to get into the world of industrial automation. It is for this reason that in 2017, he decided to get involved with the REAI and became the vice-president of the association. Two years later, he occupied the role of president.

This roundtable is now available on-demand. Register for free.

Thanks to our generous sponsor, Schneider Electric Canada, without whose support this event would not be possible.