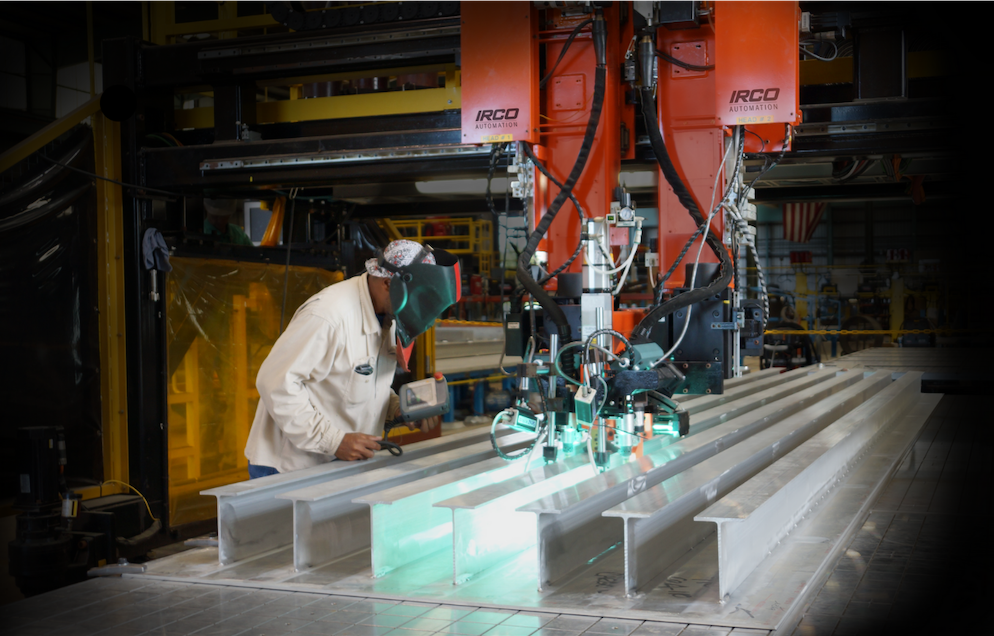 Over the nearly 60 years the company has been in business, it’s moved from integrating traditional hand welding to major robotic welding equipment. We talked to IRCO’s president Hubert Bethlehem about these big builds, how humans work with welding automation and the importance of bringing major projects back to Canada.

Manufacturing AUTOMATION: Working in heavy industry, where is your client base?

Hubert Bethlehem: We have a very diverse range of customers that we work with. Some are medium to small, but they’re mostly Fortune 1000 companies.

We will move our focus depending on where the wave is. There’s billions of dollars worth of shipbuilding going on in Canada right now. Very few people really know about that. [Or] offshore oil rigs – we’ll go to the Gulf of Mexico and spend time in Corpus Christi, or around there, depending on the nature of those projects.

We migrate to where welding is difficult, it’s heavy, it’s complicated. We don’t have a lot of little cookie-cutter things here. Most of the systems that we provide – and that’s why we’re very specialized here in North America – you wouldn’t want to import due to the size and the scope that we build.

MA: You’re going on site to build those systems?

HB: It’s all modular built. We have a 33,000-square-foot facility, so we completely manufacture and assemble the systems, or if it’s a line or multiple cells, we build complete parts of it.

Some of our systems can use up that entire space. So we’re shipping an entire system, typically they are like Lego blocks – one piece will tie into another piece and then together they create a full line. We do all of the off-site assembling, installation and orientation and training for the customers. The work onsite is just as important as the work done here in our facility.

MA: How does your work for SMEs differ from those bigger jobs?

HB: We work with them on their automated needs. It could be a custom fabricating shop, but their desire and their ability to fund automation might be different than a Fortune 1000. Today, there’s nothing that can’t be automated. Welding automation is only a subset of automation. I would dare say that an SME that is in the welding industry that hasn’t got some type of automation probably won’t be in business much longer.

If you think about somebody that has a big piece of metal and they need to assemble it and weld it – they need an overhead crane, they need a forklift, they need to put it into the proper position so they can deploy the right welding process.

They have similar constraints as a large company – you still want to optimize the welding process, you still want to put the part where it’s ergonomic, you still have safety [to consider]. Most companies have already moved to some type of automation to assist them in that area.

MA: With these large-scale installations, what do manufacturers need to be aware of in terms of safety?

HB: What could potentially cause harm? At the beginning of a project, together we identify the risks and then build safeguards into the design.

Automation can be scary, if you look at the health and safety associated with the robotic arm. It requires guarding. And it requires guarding because a servo motor is always hunting for its next signal. A servo motor can move on its own – meaning, I didn’t tell it to move there, a program did. So if there is a programming glitch, now you’ve got this robotic arm that has a swing radius of 13 feet and it could be very harmful. We want to help our customers make their processes as safe as possible.

It really starts with our customer. What are they trying to achieve? What is their core product that they’re manufacturing? And then it’s about training. Training is an investment; it’s not an expense. We all have to come to the table and realize that if you actually plan out the safest way, it’s the most cost-effective way as well.

MA: Does IRCO work with specific vendors for the robots?

HB: We aim to do what our customer’s brand preferences are and what’s right for the application. If we showed up in a location that was using all Lincoln, as an example, and the customer said they really want to stay within this welding platform, we would. It’s similar for robotic arms – we would make a recommendation to our customer based on what we know about the technology they want to look at.

There are three aspects to any project – there’s one, the technology that we integrate, two, the equipment we make, and three, the people.

Conversely, if the end user did not supply us with staff that either wanted to adapt or is capable of adapting to the automation, it wouldn’t be a successful project either.

MA: When you’re out at these big sites, what are some of the barriers to implementation of the automation? How does your team work to overcome them?

HB: Whether a small or big [company], it’s going to come back to the customer’s view on ROI. First of all, do they have enough qualified welders? Or do they just need to increase their throughput?

Our goal is to address their different concerns. If somebody just wanted to increase throughput […] it’s not just welding automation – it’s automation of moving the part into a cell, into position, and then out of a cell. The solution may be building multiple automated systems. Those are things that can reduce cycle time and increase throughput.

But if they need to automate the process due to lack of qualified welders in North America, we could take [any worker and make them] operators of these systems. You don’t actually need a welder anymore. You press a button and walk away. That is the heart of automation. When most people think “robot,” that’s what they think, but it doesn’t have to have a robotic arm on it to be an automated system.

MA: Those two issues are always in tandem – there are not enough people to fill those welder jobs. And then there’s the fact that people are upset that automation is taking away jobs.

HB: Nobody should be afraid of automation. Robots and AI [are] not taking their job, they’re making their job easier. It’s reducing the risk. Some solutions increase productivity, or they provide greater repeatability – which ties into that comment about making the person’s job easier – or they take some of the mundane tasks or the ones that maybe are not safe.

Every time you’re flipping a piece of metal with a crane, you’re putting somebody at risk. Every time you’re doing a coordinated lift with a crane or forklift, you technically are putting somebody at risk. It’s [about] reducing those safety hazards and improving the quality of the weld. And then ultimately reducing the cycle time. Those are the things that we’re trying to solve with welding automation.

MA: Where does where does the human welder fit in then in your view?

HB: We call it crawl, walk, run. “Crawl” would typically be a welder [with] some of the mechanical motion happening. But [they’re] telling the machine what to do.

Then we’ve got “walk,” where we have some of that repeatable motion built in. So that’s typically what we’re doing with a human interface, like a touchscreen, where the operator wants to move the part into a certain position.

The operator would literally select that command and walk away to a safe distance, and the part would move into that pre-determined position. So now an automated welding process could be deployed, or the welder could gain entrance into that work zone and actually complete the manual welding.

“Run” is press a button and walk away. So it’s fully automated, it just requires the human – that could be a welder, or it could be an operator, to actually select the command, and then literally go and multitask or go do something else. We have systems that can weld for 12 to 14 hours unmanned. It’s pretty amazing what can be done.

MA: What new technologies in welding automation have you seen over the past couple of years? What do you see becoming big trends going forward?

HB: I don’t think we should take for granted how far AI has come, and how that can change our daily path. The technology is more accessible than it’s ever been before. The single biggest change to draw our attention to is Industry 4.0. So is the ability for all components of a system or process being able to communicate. A machine can report data back to you and tell you the performance of the shift or its efficiency. It could also tell you when it needs new repairs or scheduled maintenance.

We developed a system called IRCOpulse, which is our answer to Industry 4.0. If you wanted to know the performance of a particular machine, you literally can get that information – what is its run rate today? How is it performing, how did [the operator] who was running it perform on yesterday’s shift? IRCOpulse provides all the analytics that you want to have.

MA: What is your focus for long-term sales growth in Canada?

HB: I’m passionate about seeing heavy industry coming back to Canada. We’re at an exciting time right now with reshoring initiatives. There’s no reason why [production] can’t be happening here in Canada. There’s no doubt that building a refinery in northern Alberta may be challenged going forward until [the oil industry gets] figured out.

We don’t have any offshore wind farms targeted yet – but when that starts to happen, there’s going to be great opportunities for Canadian manufacturers to engage in those projects. Our focus right now is infrastructure and infrastructure renewal – there’s a huge opportunity for Canada to start weighing in on that. Particularly for us, it’s how can we help people automate that?

We have a lot of technology and innovation right here in our country. And we’ve got to take some of that back. There’s nothing stopping us from shipping a turnkey system across the Atlantic. We just haven’t necessarily gone that way. Canada has a great opportunity to look outside the industries people normally associate Canada with today – there’s more going on.

This article originally appeared in the June 2020 edition of Robotics Insider, a quarterly e-book about robotics produced by Manufacturing AUTOMATION.