MA sits down for a Q&A with Scott Gravelle, the founder of Attabotics, a made-in-Canada robotic warehouse system 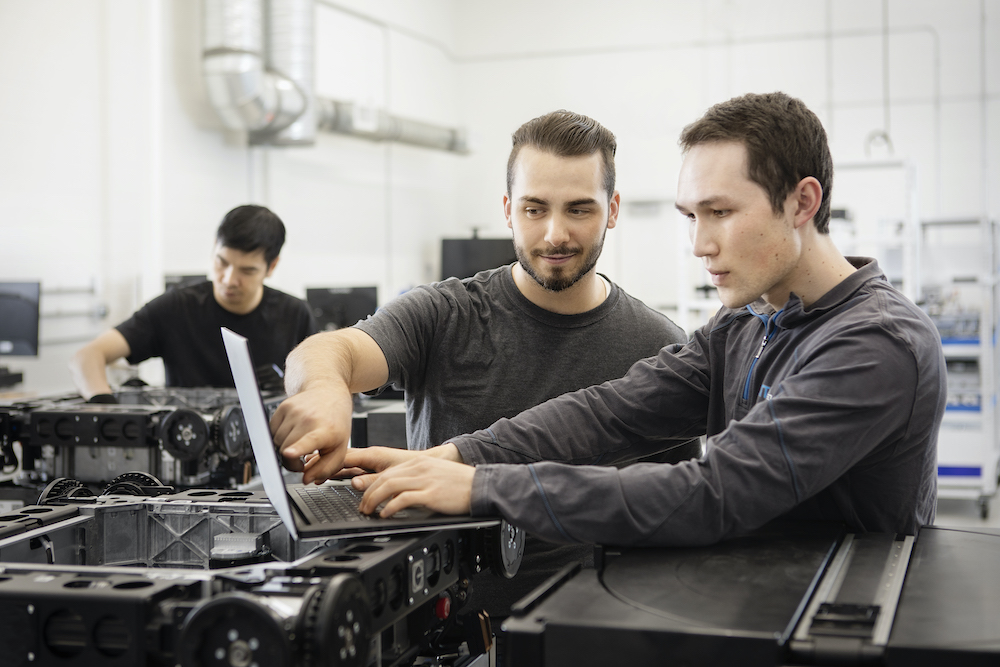 Calgary-based Attabotics is not just new to the logistics automation sector, but a pioneer in the space.

In August, the company was recognized as one to watch by an investment group led by the Ontario Teachers’ Pension Plan Board, which provided $50 million in funding for Attabotics to scale up its manufacturing and commercial deployment, bringing the company’s total funding to $82.7 million. 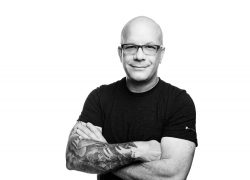 What’s unique about Attabotics’ fulfillment platform is it provides “3D storage” by flipping the layout of a horizontal warehouse onto its side so that it’s arranged vertically, akin in shape and style to an ant colony.

Bins are stored in columns, and robotic shuttles on x, y and z axes move alongside to pick and transport the bins down to a workstation on the floor.

We talked to the company’s CEO, Scott Gravelle, about his innovative, insect-inspired solution, which currently has six installations in North America, including one at U.S. retailer Nordstrom and another at an Ontario medical supplies company.

What problem were you looking to solve?

My background originally was in helping companies implement digital manufacturing, so I had worked in manufacturing automation. I was working on a buffer system for the end of the manufacturing line and I needed to have robots move around some shelves.

So, I started designing something. One thing I did notice [in my research] is that most automated solutions, with a few exceptions, were a derivative of what I’ll say is a human-centric environment. We walk on the ground, we drive on the ground. That’s why we need roads and aisles to access everything.

All of these automation solutions were derivatives of that. I asked myself what would be ideal for a robot, not for a person. And I didn’t have any ideas, but I figured nature probably already had this problem figured out.

I [found] a researcher who had poured molten aluminum down a leafcutter ant colony in the jungle, and then excavated it to see what the internal structure of that colony was. That was the a-ha moment.

Ants, being one of the most successful natural systems on the planet, arrange all their storage around a vertical axis instead of horizontal – from the floor. That led to unique storage geometry and then the world’s first truly 3D robotics shuttle.

“I [found] a researcher who had poured molten aluminum down a leafcutter ant colony in the jungle,” Gravell says. “That was the a-ha moment.”

In the research on what was available in the market, I saw that most technologies had a list of great features to them, but also some drawbacks in the context of modern commerce – certain storage density, and they weren’t designed for picking of single items.

They weren’t designed for the collation of single items. And there was so much rigidity in their defined workflows. Knowing from manufacturing that automation is historically rigid and flexible, we decided to improve on every one of these things we could.

So we ended up with an automation system that, if ants had a copyright lawyer, I might be in trouble for, but we also tried to create flexibility by having all of the routing and workflow defined by software and not any rigid linear infrastructure.

We built it from the ground up to try to optimize for modern commerce instead of taking something that’s been around for a while and trying to tweak it. 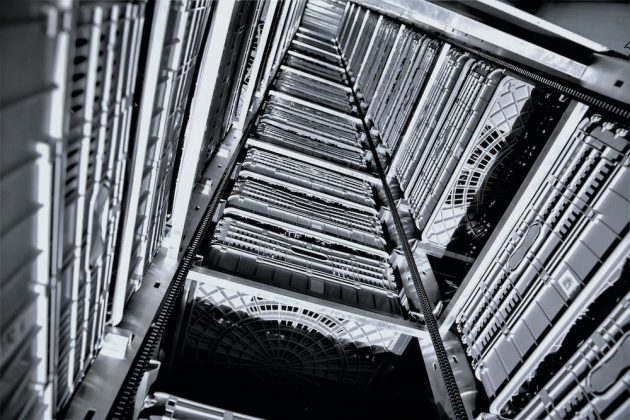 This technology is turning what a warehouse looks like on its head – literally. What’s been the response?

Customers have been looking for a solution to the problem for a long time. They know the change in consumer behaviour, they know the adoption of e-commerce [is] coming, they know internally their own challenges trying to convert their supply chain infrastructure from distributing to stores to distributing direct to individuals. There’s always [been] a strong awareness.

As they start planning and rethinking the future, we’ve been lucky enough to be included in a lot of those conversations.

Talking to some of the leading thinkers in the supply chain industry working for some of the largest organizations, understanding how they’re approaching the problem, and then seeing how we can best apply that thinking to our technology has been a massive benefit in trying to create a solution that actually solves problems.

How has the coronavirus crisis accelerated the need for a solution like this?

Over a couple of months, we saw what was predicted to be well over five years of growth in a number of different market verticals. People that had never gone online to do certain types of shopping – now, because of the pandemic, have explored that. The expectation is they’re experiencing the benefit of it.

The problem that we thought we had, and that customers or retailers thought they had five years to solve, well, that problem is right here and right now.

There’s also acceleration into markets that traditionally weren’t automated because of the demand for e commerce or digital platforms. They’re now looking for solutions in those markets that were not able to be automated. 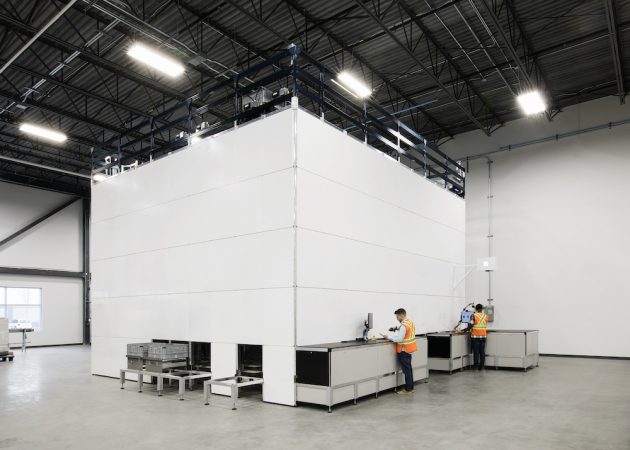 The exterior of the Attabotics system. Photo: Attabotics

How does the 3D storage system technology work?

Because of its unique geometry, we have the highest storage density of any automation system while still providing direct access to any one of the storage bins. We don’t have to move anything to get to anything else. When you look at the solution, there is a horizontal grid across the very top, like across the ceiling, and there’s a horizontal grid, at the very bottom, right by the floor.

That grid is what allows us to not only direct a robotic shuttle to the vertical column but, when it gets to the bottom, also allows us to direct that shuttle anywhere on the perimeter to present that tote.

We are working with a number of different partners to present items for automated picking. We also have interfaces around the perimeter for different kinds of workflows – consolidation, bin-to-bin picks, induction. It’s in essence a big mechanical database of goods.

“[The] grid is what allows us to not only direct a robotic shuttle to the vertical column but, when it gets to the bottom, also allows us to direct that shuttle anywhere on the perimeter to present that tote.”

And then we optimize the input and output of goods into that database, and do the routing in a way where there’s no rigidity, there’s no defined paths. We move bins around, and we present those bins with the goods in them in an optimized sequence, anywhere, for whatever work needs to be done. And that flexibility is what allows us to create spatial efficiency and labour efficiency.

Each bin is not just a single item. It can be a unique combination of items that lead to throughput efficiencies in the solution. So there is sometimes an optimization at induction to put the same SKU in multiple locations.

With our sorting algorithm and the flexibility in our route finding, we can optimize picking stations by form factor or product to create a higher level of efficiency and lower error rates.

That makes the robotic each-picking solution set itself up for the most success. [Each-picking is] where we’re approaching [clients] really aggressively right now, especially in the grocery sector. 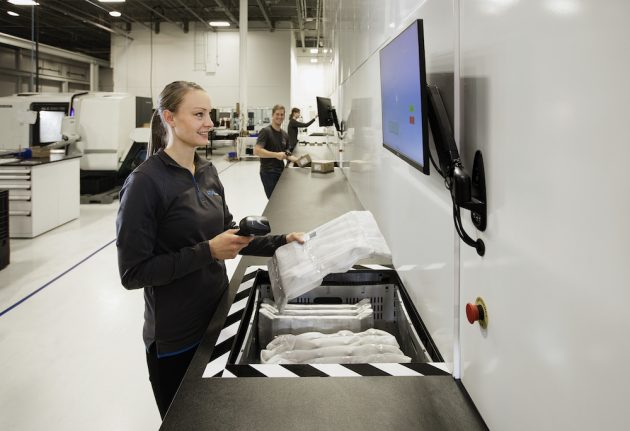 Attabotics recently received $50 million in funding from the Ontario Teachers’ Pension Plan Board. What’s the plan for it?

Ontario Teachers’ Pension Plan [has] had a lot of experience in owning companies in this space. They used to own a major portion of Dematic, one of the largest companies in the industry.

So they have an incredible amount of acumen and experience in the space, which is invaluable. Many companies are figuring out how to survive after COVID. Now, we are not at all concerned with measures other than how quickly can we get the technology out there. The support is so encouraging.

We are excited to have worked through that initial process and are now in just our very final stages of the dotting the i’s and crossing the t’s on the commercialization stage.

And that is a huge accomplishment given that four years ago this was a CAD model and a PowerPoint presentation in a laptop. I couldn’t be any more proud of the super-talented people on our team and what they’ve accomplished.

What should manufacturers know about automated storage and retrieval systems?

What the markets are experiencing today wasn’t something anyone could foresee. Changing customer behaviour has been more rapid than the evolution in a lot of cases.

So, any automation system that can deliver you a great deal of flexibility so your capital investment can stay relevant and contributing as long possible I think is really important. And that’s why we incorporated that into our technology.

A version of this article originally appeared in the September 2020 edition of Robotics Insider, as well as in the October 2020 issue of Manufacturing AUTOMATION.

Related
How will COVID-19 impact the manufacturing automation market?
A perfect storm: COVID-19 disrupted supply chains. Here’s how automation will help
Preparing for disruption with machine learning
Are cobots the future of manufacturing production?
Tags