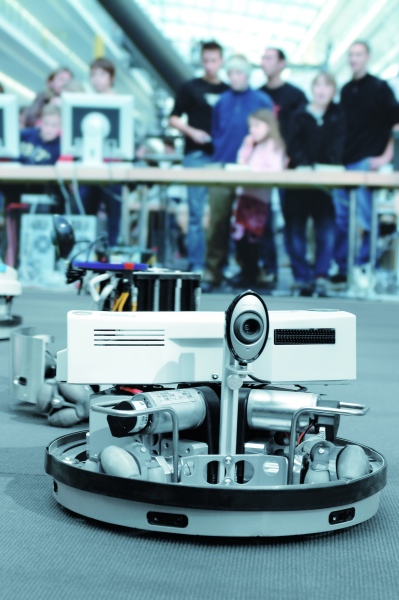 Robot hockey is a challenge for robotics and artificial intelligence. Testing in the areas of technology and science lead automatically to results for industrial applications. In addition to the capabilities of young mechatronics technicians, the mobile robot competition at WorldSkills also focuses on the possible range of applications for this technology.

The mobile robots give rise to a contest atmosphere at WorldSkills Calgary 2009 when they go into action within the framework of a show competition. 14 international teams will compete against each other at the Mobile Robotics Competition. Team Canada’s Mobile Robotics competitors are represented by Pavlo Tovaryanskyy and Myles Robinson, of Technical Vocational High School in Winnipeg, Manitoba, and were gold medal winners of robotics in both the provincial and national skills competitions in 2008. (The Canadian mechatronics competitors – Andrew Marcolin and Jamie Feenstra – secured their positions at the 2008 Skills Canada competition held in Calgary.) 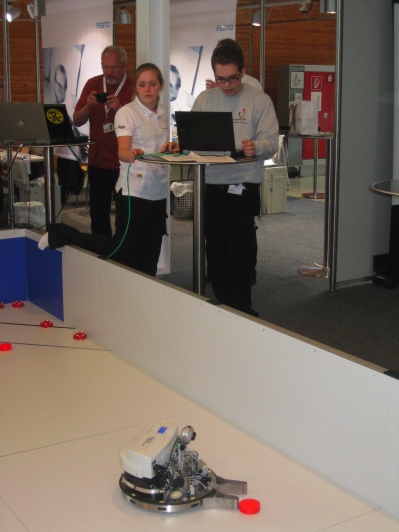 Robotino as a training platform
The mobile robots are much more than just a gimmick. With the help of Robotino View control software, they’re transformed into an attractive experimental learning platform which covers the basics of sensor technology, electrically operated motor controls, image processing and, of course, mobile robotics. In addition to vocational and technical schools, the mobile robot system is also utilized by technical departments at universities including mechanical engineering, electronics and computer sciences, as well as for numerous other applications such as sensor controlled continuous-path control and autonomous navigation.

Systems which independently plan and execute action on the basis of perceptions acquired by means of various types of sensors are designated autonomous robots. Applications range from simple track guided transport robots to autonomous service robots, for example intelligent vacuum cleaners, lawn mowers, mine sweeping robots and household helpers, right on up to motor vehicles and autonomous aircraft.

Industrially viable, mobile autonomous robot systems are still a scarce commodity. Mobile systems of this sort facilitate the organization of logistics, so that production in highly developed nations has outstanding competitive opportunities in the global marketplace. Progress has been made in recent years. In particular events like RoboCup are thus amongst the milestones from which R&D progress towards industrial viability can be generated.

Vision of industrial use
In the future, mobile autonomous robot systems will not only make logistics more flexible in many ways. By integrating currently stationary handling systems, they’ll also greatly increase flexibility in the field of production technology.

Much can be learned about how interdisciplinary technologies fit together, experience can be gained and knowledge can be bundled in a targeted fashion by pursuing the challenge of robots playing hockey, so that high performance robots can evolve on the basis of image processing, artificial intelligence, electronics, mechatronics and automation technology.

At WorldSkills, apprentices from all over the world are provided with the opportunity of demonstrating their technical abilities in 45 vocational disciplines from the fields of technology, industry and service.
Festo initiated competition in mechatronics 17 years ago, and took over sponsorship of WorldSkills Mechatronics. The company supports Skills Canada / Compétences Canada, and SkillsGermany at the Hanover Trade Fair, the world’s largest industrial exhibition, in the disciplines of mechatronics and mobile robotics.