Features Education & Training In-Depth Women in Manufacturing
A nationwide effort: How industry can encourage women to join the skilled trades

The Supporting Women in Trades (SWiT) Strategy, led by the Canadian Apprenticeship Forum, targets 15% women in skilled trades roles by 2030 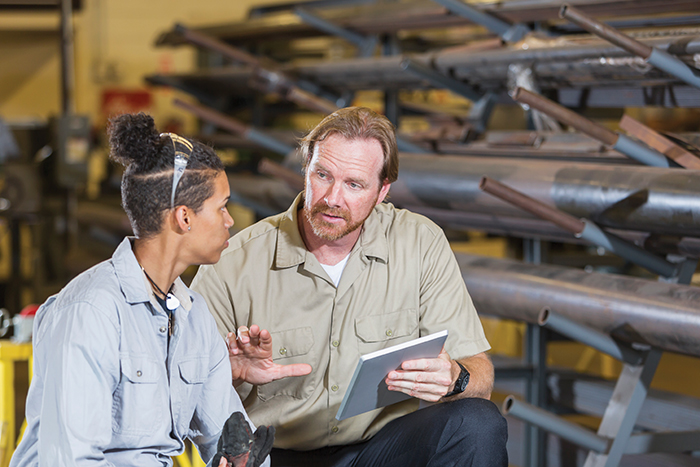 When the Canadian Apprenticeship Forum (CAF-FCA) released its National Strategy for Supporting Women in the Trades (SWiT) in the fall of 2020, it was an important moment for many women working in the sector.

“We’ve been talking about the barriers to women in the trades for 30 years,” says France Daviault, executive director of the CAF-FCA. “But we needed to talk about a way forward.”

Women fill just 4.5 per cent of roles in the skilled trades in Canada – and central to the SWiT strategy is a goal that women should fill 15 per cent of those jobs by 2030.

The strategy’s four key actions are focused on breaking down the barriers that prevent or discourage women from joining or staying in the skilled trades – including outdated hiring policies, lack of on-the-job support, limited education for young women and girls, plus an at-times challenging workplace culture — and keeping track of the progress.

“As everyone knows, what gets measured gets done,” says Daviault. “You can talk in circles forever and we have been. We wanted to stop the buck.”

SWiT’s 15 per cent target may seem like a relatively low bar when women make up 50 per cent of the general population, but it was considered most achievable by the task force who developed the strategy, Daviault says.

Gender equity targets in other sectors modelled off the federal government’s 50–30 Challenge (gender parity and 30 per cent representation of persons from underrepresented groups in senior management) were considered too lofty for a sector that has such low employment rates for women. Attracting women to skilled trades roles is difficult, but keeping them there can be harder.

“Although a lot of employers have really good policies in place, it doesn’t translate onto the worksite. For a lot of these jobs, it’s still really hard on the job site – there’s still discrimination, misogyny, sexism,” Daviault says. “You can invite someone to dinner, but if they get to the door and you feed them crackers, they’re not going to come back.”

The CAF-FCA held its first Supporting Women in Trades Conference in Halifax in 2018, where 350 tradeswomen, apprentices, employers and government gathered in an effort to bring fragmented local and regional movements together in one place.

Together, they developed a vision for what the future of the skilled trades could look like, and when the conference reconvened in Vancouver the following year, it was to discuss ways to achieve those goals. But a series of focus groups among the attendees revealed that what Canada really needed was something much more concrete and targeted – an industry-developed national strategy.

Sixty-five of the CAF-FCA’s members – including tradeswomen, representatives from women’s organizations, labour groups, employers, educators and apprenticeship authorities – volunteered to develop the strategy. “We didn’t want to turn anyone away because these were people from all walks of life, all trades, and all experiences who wanted to participate,” Daviault says.

The CAF-FCA divided the task force into teams to research best practices, plan communications strategies and examine existing quotas and industry targets for hiring women and persons from underrepresented groups, and turn it into what is now the SWiT strategy.

SWiT lays out four actions, the first of which is to develop the national movement and a call-action-campaign that celebrates leaders who are committed to the inclusion of women and underrepresented groups.

This led to the #Champions4Change initiative, which recognizes “champion” organizations that have committed to supporting women working in the trades and to collecting and sharing gender-based data.

It also encourages organizations that are affiliated with the skilled trades but not necessarily involved in hiring to become allies, and to demonstrate their commitment to addressing the challenges women face in the skilled trades. The CAF-FCA is currently hosting roundtables with employers to spread awareness about the program, which is open to members and non-members alike.

Second, the CAF-FCA says it will collaborate with all levels of government on diversity targets and to increase the pressure for policy change. Carla Qualtrough, Canada’s minister of employment, workforce development and disability inclusion, brought the SWiT strategy national attention when she highlighted it during the unveiling of the $63.5-million Union Training and Innovation program this past February.

The initiative aims to train and certify skilled tradespeople from key groups such as women, Indigenous people, persons with disabilities, Black and racialized Canadians, and newcomers.

When the federal government released its budget on Apr. 19, it included a $470-million investment over three years for a new Apprenticeship Service to help 55,000 first-year apprentices in manufacturing and construction Red Seal trades to pursue opportunities at SMEs.

If the budget passes, employers would be able to receive up to $5,000 for first-year apprenticeships to help pay for training and salaries – but if they hire apprentices from underrepresented groups, including women and persons from racialized communities, that grant jumps to $10,000.

“Employers think there aren’t enough women available to fill the quotas, but we disagree. It’s a chicken-and-egg thing,” says Daviault.

“We’re getting invited now to tables with policymakers and changemakers,” says Daviault. “We’re having discussions about what policymakers can do concretely to remove the barriers – barriers to being hired, to being called back after leave, to being sent to training and having a job when you come back, to feeling safe in a workplace.”

Some goals, like establishing diversity quotas on projects, can be more challenging to implement. “Employers think there aren’t enough women available to fill the quotas, but we disagree. It’s a chicken-and-egg thing,” says Daviault. “Women don’t see themselves as having potential long-term employment with these companies or in these trades. But if you actively recruit women – if you change the language in your HR postings, for example, to make it so that women see themselves in those roles – they will come.”

The SWiT strategy’s third action is to develop “toolboxes,” or online resource centres, for key groups including employers, labour unions, tradeswomen and educators. The CAF-FCA has pulled together best practices and documents that have been developed over the past 30 years and put them all in one place at switcanada.caf-fca.org, where resources are updated regularly.

Topics include the development of safe and inclusive workplaces, how to change the language of company policies, how to access support groups, and how to increase the representation of skilled trades roles in elementary and secondary schools.

The fourth and final piece of the strategy – and the most involved task, says Daviault – is to hold employers and unions accountable to that measurable target of 15 per cent of women in skilled trades roles by 2030.

Employers should establish anti-bullying and anti-harassment initiatives, such as zero-tolerance policies, mandatory training about respect and safety for all staff, consequences if an investigation yields that bullying or harassment has occurred, and yearly anonymous surveys.

Employers can sign up to have their logo displayed on the SWiT website and become part of a group of companies committed to supporting women in trades – but to do so, they must agree to provide gender-based data on an annual basis and participate in a survey. The CAF-FCA will be tracking the data to ultimately publish a report on outcomes.

The strategy also includes additional areas of attention for key stakeholders. Employers should establish anti-bullying and anti-harassment initiatives, such as zero-tolerance policies, mandatory training about respect and safety for all staff, consequences if an investigation yields that bullying or harassment has occurred, and yearly anonymous surveys.

Among the other suggestions are to engage diverse groups when jobs are posted to help get the word out to women and candidates from underrepresented groups, review all policies for gender-neutral language, supply workwear fit for women, provide safe and secure washrooms for women, and promote professional development opportunities.

The apprenticeship system itself, used to place people into skilled trades roles, can be another barrier to women entering the skilled trades, and changing the way employers view apprentice candidates is ongoing work.

Unlike other educational pathways, apprenticeships are predicated on an employer hiring or “sponsoring” a person without any prior training and then training them on the job. Then the apprentice leaves the job for six to eight weeks to complete a classroom program. Ideally, the employer hires them at the end of their study period.

“Regardless of gender, it’s very hard for people to simply get out of high school and find an employer to take them on as an apprentice. The larger employers have programs in place, but small and medium-size employers can be challenged, because it’s a big investment,” explains Daviault. “If you add on top of that the gender bias, it’s really difficult for women to be taken on as Level 1 apprentices without having any prior experience, or without having any support system in place.”

The Office to Advance Women Apprentices, which helped develop the SWiT strategy, is one such support system. It connects women interested in the trades to employers, and provides assistance as women move through the apprenticeship system by facilitating access to pre-apprenticeship programs – year-long college courses that give would-be apprentices basic skills that make them more attractive to employers – and by maintaining networking and support opportunities.

The CAF-FCA is also turning the lens on itself when it comes to apprenticeship research, adding gender-based markers to all analysis including registration trends, pathways into the system and on-the-job experiences.

“This is not just a women’s issue. Workplace safety and workplace respect is a societal issue,” says Daviault. “I’m inspired when I hear stories of women working 10 to 20 years in the trades who are now feeling like they have a voice. And that they have a chance to change the environment and change the landscape for young women coming behind them.”