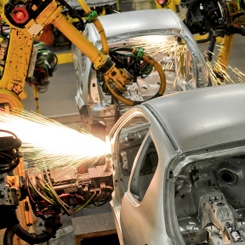 Canada’s auto parts makers will implement major structural changes in 2009, which include trimming its workforce by one-third as part of a 34-percent reduction in industry costs this year, according to the Conference Board’s Canadian Industrial Outlook: Canada’s Motor Vehicle Parts Manufacturing Industry – Spring 2009. (Linamar, however, recently snagged a substantial multi-year contract–so it isn’t all bad news.)

“Conditions will be undeniably difficult in 2009, and many small and medium-sized firms could potentially go out of business,” said Sabrina Browarski, economist and author of the outlook. “The larger manufacturers, however, stand to increase their global market share when U.S. demand for automobiles starts to recover in 2010.”

Canada’s auto parts makers will lose money for the second consecutive year in 2009, but the industry is expected to return to profitability beginning next year. The industry posted a $109 million loss in 2008. With production expected to fall by 39 per cent in 2009, a further loss of $173 million is forecast this year.

Extensive cost cutting, combined with the start of an anticipated rebound in U.S. auto sales next year, will allow the industry to return to profitability quickly. A profit of $222 million is forecast in 2010. By 2013, profit margins are expected to return to historical norms.

Three factors give auto parts manufacturers greater cause for optimism than automakers. First, many of Canada’s largest parts manufacturers are multinational corporations with diversified sales in other markets. Second, parts firms are in better financial shape than the auto makers. Third, the industry is not saddled with the “legacy costs” that the Detroit Three automakers must bear.

The medium-term outlook for the industry is based on the assumption that General Motors will successfully exit Chapter 11 restructuring, and that Chrysler will be restructured under a stable partnership with Fiat.
www.conferenceboard.ca

Related
Philippine economy grows 6.9% in last quarter
StatsCan: Mfg sales up 1.9% to $55.8B in February
StatsCan: Manufacturing sales up 0.2 per cent in September
US factory orders for large manufactured goods up 2%