Siemens has invested more than $3 million in design, test equipment and upgrades to the facility – which also manufactures switchboards, motor control centres, motor starters and gear motors – to accommodate the inverter production line. There are currently 10 employees directly involved in solar PV inverter production at the facility, and the company is on its way to creating 50 skilled positions in business development, engineering and production to support its PV business in Canada. 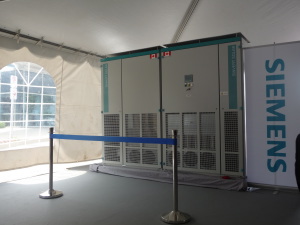 “Siemens, frankly, is just one more example of how our Premier’s vision to build a global, leading, clean energy economy, creating thousands of new jobs, is working right here in Burlington,” said Minister Duguid. “It’s companies like Siemens that are on the front lines, that are helping us build our clean energy economy, and helping us turn the corner as Ontario accelerates out of this global recession.” 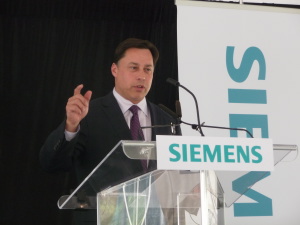 Production began in May, and Siemens Canada has already made its first shipment of solar inverters for Ontario’s growing clean energy economy to two solar farms.

“Our two decades of experience in local drives manufacturing enabled us to ramp up production successfully over the last months,” said Anthony Bezina, plant manager at the Burlington facility.

The Sinvert inverters produced at the plant are used to convert DC from PV generators into AC power, which is then relayed into the grid. The facility is capable of producing inverters with an annual output of 250 MW – enough electricity to power 32,000 homes.

The ribbon-cutting ceremony was followed by a tour of the manufacturing plant, including the assembly and testing stations for the PV inverters.