Features Opinion
Lunchtime with Stan: Sometimes, we just need to be reminded of why we are in business 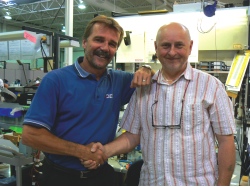 On a spur of the moment whim, I invited a long term employee out for lunch – my treat, no reason in particular.

This individual has worked for me for nearly 20 years. He started with the company shortly after escaping from an Eastern European country with his young family. In a casual conversation earlier in the week, I told him I discovered a great little breakfast and lunch diner that specialized in preparing and serving meals with recipes from his homeland. That discussion resulted in the impromptu invitation to take him out to lunch. I thought I was doing something nice for him, but it ended up being something really important and special to me.

Over lunch, he reflected on his time in this, his adopted country, and his time in our employ. He started by saying the best single day of his life was the day he found our company. He told me of his routine at the (un)employment office, looking for work; of noticing the ad identifying our company’s needs; of his interview and his first two days of work. He started on a Thursday, and because the following day was payday, he went home with a cheque for two days’ pay in his pocket. He told me that at that time, he had no money in the bank and his cupboards and refrigerator were empty. On the way home, he cashed his cheque and bought some needed groceries. He still recalls the gleeful reaction of his daughter when she opened the fridge and saw the milk. The world was all right that day, and it promised to get even better.

He went on to tell me about his two daughters, both now university graduates, both contently employed in their fields of expertise and both now happily married. He also told me of his son, still in university, and shared with me how we helped him (through summertime employment experiences with us) in ways that we never knew. Although I heard about most of these stories individually over the years, I never really heard them all together and hadn’t really considered how much of a role we had played in his and his family’s life.

And boy, did I really need to hear that.

With more safety inspectors, more environmental regulations and more responsibilities for the continuing economic well-being of past or present employees, it’s easy to daydream about the days when the company was far smaller and times far simpler. It’s not that employers are against looking after workers or the environment; it is the assumption that they are not legitimately concerned or working towards these goals for the right reasons already.

The city in which my company is located is no better. Here, some local politicians are playing up to the voters by suggesting it’s time for “industry to pay their fair share,” even though our property tax rate is nearly five times higher. What I find particularly aggravating (and demoralizing) is that they are casting us in a very negative light, saying we don’t pay our fair share and implying we are takers from, and not contributors to, the society and the communities in which we are located. A colleague of mine summed it up very accurately when he said that whenever he goes to City Hall, he feels like Darth Vader; people look at him like he represents the “evil empire” of industry.

It has been a difficult stretch for manufacturers the last few years, and in particular the last few months. As the unavoidable external pressures (the dollar, low cost competition, etc.) and the aggravating internal stresses (the policies of our own governments) continue to rise, the “is it worth it?” question is more frequently asked.

And after my lunch with Stan, I can still answer yes.

Thanks for lunch Stan, because sometimes I need to be reminded that it is still is worth it. After all, I am human – and I’m not from the evil empire. W

Paul Hogendoorn is president of OES, Inc. and chair of the London Region Manufacturing Council (LRMC). You can reach him at phogendoorn@oes-inc.com. For more information about the LRMC, visit www.manufacturinglondon.com.