Features Opinion
Christening the controller: What you don’t know about the birth of the PLC

Why am I writing about the PLC again? ‘Tis the 40th birthday of the device — a big event in anyone’s life. Writing this column about the PLC is difficult, especially since the history has been well covered by the media. What can I possibly write that would be new? How do I break the writer’s block?

The solution was to talk to others that were at the birth of Bubba — the 084. My close friend and partner, George Schwenk, remembered an untold event that occurred in Pennsylvania. Ah, rescue was at hand. I would not have to resort to leftover tales of the past.

GROWING PAINS
We took one of our 084 units up to one of our early customer prospects. This particular customer was Byrant in Springfield, Vt.. The 084 was in the trunk of my rattletrap Pontiac, and since we needed help carrying it into the customer, we requested some of the people at Bryant to help us. We went out and opened the trunk, and the first comment made by an outside viewer of the first programmable controller was, “Thank God, it’s not another pastel-colored piece of sheet metal.”

Another of our first major customers was Landis in Pennsylvania. We flew the equipment down in a private aircraft and we were apprehensive because we were late (as usual). The PLC was mounted with all the I/O on a relay rack and was very heavy. When we brought the equipment into Landis, we tripped over the threshold and the equipment went KA-RASH onto the floor! Without much chagrin, we picked the equipment up, trundled it in, hooked it up and behold, it worked quite well.

Landis wrapped welding coils of wire around the machine to induce electro-magnetic noise to see if they could make it fail. We had them there! We used to test the programmable controllers with a Tesla coil that struck a quarter-inch to a half-inch arch anywhere on the system, and it had to continue to run.

Other aspects caused some discussion. For example, it had no ON/OFF switch. It had no means to load software. It had no fans. It ran cool. It could survive bad physical and thermal environments. It was not the computer industry standard. There were many things that were most difficult in the acceptance of the programmable controller, and early acceptance was tough. 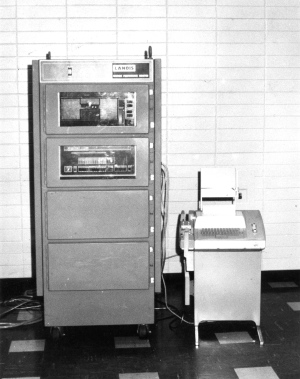 BAPTIZING THE PLC
The real test went something like this. Our competition was the PDP-14. It was designed to GM specifications for a controller. I guess GM thought they could design computers as well as automobiles. Stan Schoonover of Landis had early experience with both our Modicon unit and the Digital Equipment PDP-14 and he selected the 084 Modicon (now Schneider) unit as his preferred component. Well! The Digital salesman rankled. Stan held his ground. So the Digital man brought down Ken Olsen to see Stan. At the time, Mr. Olsen was president and cofounder of Digital Equipment Corp. (the Bill Gates of the late ‘60s). Stan showed Mr. Olsen the 084 setup running a small control problem. The unit had welding cables wrapped around it with the welder being used and it ran fine. Stan then took his Coke and poured it over the 084 — it still ran fine. The experiment also ran next to a huge motor starter. Stan said, “When I can do this to your PDP-14, I will buy some.” Mr. Olsen soon cancelled the PDP-14 program.

The PLC has two things going for it: ladder logic and good hardware. It matches the mind of the user and the environment of the application. Blue collar software and hardware did the job. It has no blue screen of death.

Dick Morley is the inventor of the PLC, an author, speaker, automation industry maverick and a self-proclaimed ubergeek. E-mail him at morley@barn.org.

Related
Christening the controller: What you don’t know about the birth of the PLC
Dreaming of electric sheep: Harness the power of professionals to get the job done
Analyzing risk: The Monty Hall problem
Future gazing
Tags