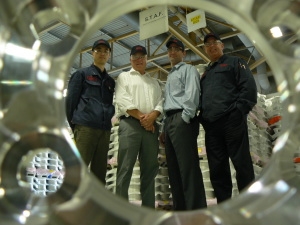 The University of British Columbia and Toyota have received a federal grant to develop a new process for producing stronger, lighter and lower-cost aluminum wheels.
The Natural Sciences and Engineering Research Council of Canada (NSERC) has awarded UBC and Toyota $727,000 from its Automotive Partnership Canada program to refine the manufacturing process for water-cooled die casting – the next step beyond the industry standard of cooling with compressed air. Toyota will provide more than $1 million in cash, personnel, equipment and other resources for the project.

UBC and Toyota are planning to have the technology deployed by 2014 at the Canadian Autoparts Toyota Inc. (CAPTIN) manufacturing plant in Delta, B.C. The plant employs 250 people and has the capacity to turn out 1.7 million wheels a year.

“CAPTIN needs to maintain its competitiveness in the face of lower labour costs in Mexico and China,” says Deryl Sturdevant, president of CAPTIN. “This grant, and UBC’s contribution of expertise, is critical to our long-term success as an automotive parts manufacturing facility in Canada.”

Aluminum wheels are considered one of the most challenging parts to make because of safety requirements and the need for extensive styling and finishing. Using a water-cooled method for casting molten aluminum into a die creates a lighter but stronger product in less time.

However, CAPTIN wants to refine this proven process further to reduce cavities or pores that form within the metal, and to lower costs to make and maintain the dies, minimizing excess aluminum.

“Even though our process provides a higher value to customers, it is not economical to proceed if we can’t bring the cost down,” says Yongning Wang, CAPTIN’s general manager.

UBC has been collaborating with CAPTIN, Toyota’s first investment in Canada, since the late 1990s to develop a computer model for optimizing the design of low-pressure die casting. That research resulted in Toyota transferring its die design operations from Japan to Delta in 2003.

By using sophisticated computer-aided design tools to understand the fundamental science happening in the casting process, the research team expects to rein in the water-cooled technique’s costs.

“Casting as a technology is very old, dating back to approximately 3,000 BC, so you would think we would know precisely what is happening in a modern casting process. Yet, the fact is, we don’t,” Cockcroft says. “It’s an exceedingly complex process involving the transport of heat and mass across a range of scales, from metres to a millionth of a metre.

“The mathematical models we will apply in this program, which will take up to a week to run on the latest generation of compute servers, will enable us to accomplish something that is just too complex using more conventional, experience-based approaches.”