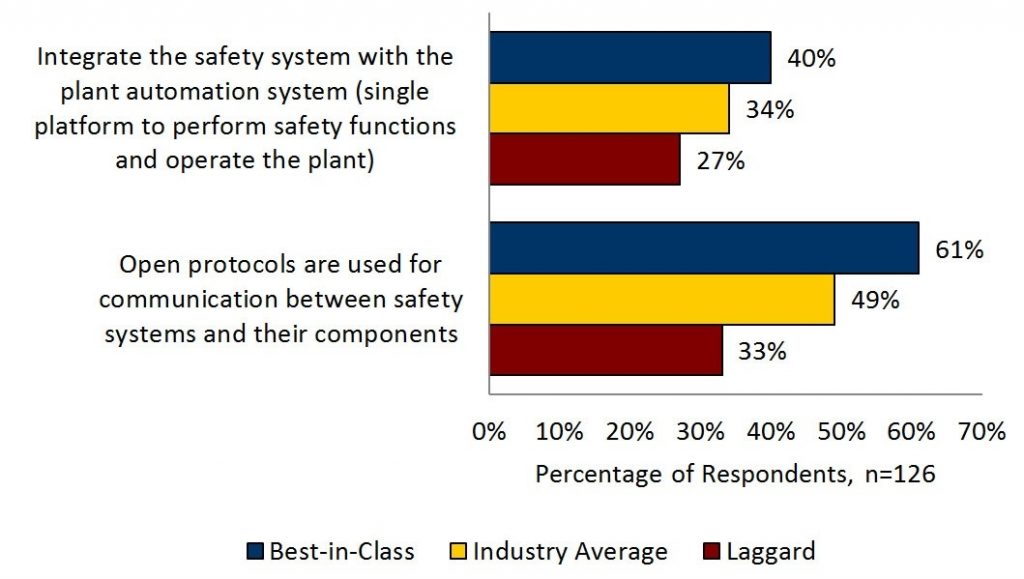 An increased focus to comply with regulations and the need to reduce safety injuries are driving organizations to adopt new strategies and technologies to ensure the safety of people, processes and products. A recent Aberdeen Group study, “Integrated Safety Systems: Ensuring Safety and Operational Productivity,” surveyed more than 120 executives last Fall about the current state of their safety program and the technologies they use to support their safety initiative. The report provides a roadmap for organizations attempting to better understand how an integrated safety system and other enabling technologies can best be deployed in a plant environment.

Over the past few years, safety has moved to the forefront for manufacturers. The past two years have seen some of the most talked about incidents (i.e., the Gulf of Mexico oil spill, the Chilean mining accident, and the Virginia coal mine explosion). These events highlight the importance of having an effective safety strategy that ensures compliance and reduces the risk of an adverse event.

• Unscheduled asset downtime is measured as the amount of unscheduled time the asset is offline against the total asset availability;

• Injury frequency rate is expressed as the number of injuries recorded per 100 full-time employees per year; and

Respondents were divided among three categories – Best-in-Class, Industry Average and Laggard – based on their aggregate performances in these four metrics.

These four KPIs provide a holistic measure of success in any organization, but are especially telling when examining the success of safety performance. Indeed, Best-in-Class companies are outperforming their competitors across all metrics, and are able to create a safer working environment and achieve higher operational performance with a 90 percent OEE rate and two percent unscheduled asset downtime.

Safety is critical in manufacturing operations, and Best-in-Class companies understand that it often requires organizations to invest in the latest technology to provide them with the ability to identify events before they occur. The nemesis for all manufacturers is unscheduled downtime resulting from equipment failure, operator error or nuisance trips. Investing in safety technology will enable organizations to gain visibility into the reasoning for asset downtime.

However, historically, investments in plant- and factory-level real-time systems were mainly driven by the need to control and safely operate large investments in plant and equipment. This objective often warranted physical and technical isolation between the control systems and safety systems. In this approach, manufacturers would have dedicated personnel who would monitor and control the safety systems. The idea was that by implementing such architecture, there would be less risk of the safety system being compromised by events on the control system. This approach generally costs more and raises a number of complex design and integration issues. In fact, in Aberdeen Group’s research, we uncovered that when it comes to the safety system architecture, 71 percent of the Industry Average are still separating the two systems.

Additionally, innovation in the design and implementation of safety systems was limited due to application standards that placed constraints on the flexibility of safety system design. The Best-in-Class companies are differentiating themselves and have taken advantage of the latest technology and recent changes to the global safety standards to implement the safety system architecture shown in Figure 1.

Another area of technology innovation comes in the form of network protocols used to communicate and transfer data between safety systems and their components. Best-in-Class companies are 84 percent more likely than their competitors to leverage non-proprietary protocols. In the past, communication between the safety system and their components was done through proprietary protocols based on the vendor product. This was done for many reasons; mainly, manufacturers believed that by using proprietary protocols it ensured the reliability, availability and security of their safety systems. However, with the recent advances in networking, manufacturers can ensure the same level of availability, reliability and security through the use of open protocols. Over the past years, several open protocols have been released – PROFIsafe, CIP Safety, FOUNDATION Fieldbus SIF and Safety over EtherCAT, to name a few – and are supported by numerous vendors. These open protocols greatly improve the level of integration and interoperability between standard and safety control systems. This seamless communication gives manufacturers better visibility into the reasons for and frequency of events, and gives them the ability to more effectively manage the massive amounts of complex safety data. In addition, by utilizing open protocols, it allows manufacturers to combine best-of-breed hardware to produce the most efficient safety and control system, rather than be restricted to using a particular vendor.

Indeed, Best-in-Class companies recognize that the deployment of an intelligent, integrated safety solution can not only ensure the safety of their employees, but also directly affect their bottom line by improving manufacturing productivity. The time is now for manufacturers to take advantage of the changing landscape in technology, not only from the safety system perspective, but also from a networking capabilities perspective.

Nuris Ismail is a senior research associate in the manufacturing group at Aberdeen Group. She can be reached at nuris.ismail@aberdeen.com.

This column originally appeared in the January/February 2012 issue of Manufacturing AUTOMATION.