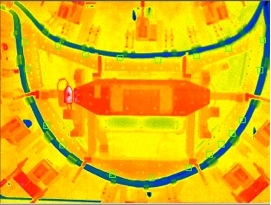 Cars need to be light to be efficient in their fuel use, but they also have to be strong. To achieve both of these goals, modern car panels are made of a combination of a metal layer on top and a structural adhesive layer underneath. These layers are glued together using induction. But this is a tricky process. The temperature has to be exactly right for the adhesion to work properly. To ensure that the adhesion goes smoothly, Fiat uses Flir thermal imaging cameras to provide automatic feedback during the process.

The time it takes to complete this process differs depending on the type of adhesive used and the amount of bonded joints required. Usually, it takes approximately 40 to 45 seconds from start to finish. But, like with all other processes, something can go wrong. If for some reason the temperature at one or more adhesion points is not within the temperature range at which the adhesive functions properly – it’s either too high or too low – this leads to weakness in the resulting component.

Fiat was looking for a method to ensure that the adhesion worked while the production process was in full operation. Italy-based Inprotec delivered just that: a quality test using the Flir A615 thermal imaging camera.

Inprotec was founded in 1992 in Milan as a distributor of high-tech equipment for industrial safety applications. Once the professionals of Inprotec realized the potential of thermal imaging technology, the company became an official Flir products distributor. Nowadays, the Inprotec Group has regional offices in Milan, Rome, Sicily, and even in Algeria.

The Flir A615 thermal imaging camera detects temperature differences as small as 0.05 degrees Celsius and produces thermal images at a resolution of 640 by 480 pixels. If the induction heating process fails to reach the right temperature, an automatic alarm will go off to warn the operating personnel.

Since the bond is unsuccessful if the temperature requirements aren’t met, the component has to be discarded if that is the case.

Roberto Ricca, director of sales at Inprotec’s Thermal Imaging Department, is very happy with the quality of the Flir A615 thermal imaging camera.

“It provides exactly the detailed thermal data needed for this type of application.”

Using the Flir Software Development Kit, Inprotec developed the interface for the thermal acquisition of the induction process with the Flir A615. The thermal data are stored on a server for quality traceability of the production of car bonnet.

The technicians at Inprotec inserted the thermal imaging camera in a hard protective exterior and installed a fan that prevents fumes from dirtying the thermal imaging camera’s optics. The distance to the measured component is four metres to allow automated robot arm handling during the loading and unloading of components. A touchscreen user interface allows quick and easy operation by the plant’s personnel.

Marco Simioli, technical manager at KGR, the manufacturer of the induction equipment, is very pleased with the thermal imaging camera.

“With the Flir A615 system, we are able to reach the optimum performance of the production line. The thermal data allows us to evaluate and optimize the heating process. The alarm allows the operators to eliminate the components that do not fit the requirements and to take corrective actions to ensure a perfect production line.”

System can be adapted for future use

The computer compares the temperature readings of 16 or more locations with previously determined parameters. If the detected temperature values are too high or too low, an alarm will go off. According to Ricca, the user can easily add extra measurement spots.

“This is an important feature. Because this system is flexible, it can be adapted for use with future car models as well.”

“This makes a reliable and cost efficient quality check an even more important factor in maintaining high quality and production rates. The automatic quality check using the Flir A615 thermal imaging camera makes that possible.”